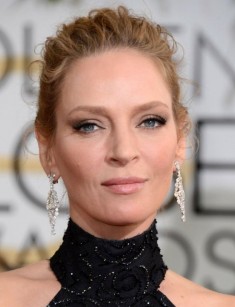 Uma Thurman is an American actress who played in fifty projects. She is Quentin Tarantino's muse. Uma Thurman played the leading roles in "Kill Bill" and "Pulp Fiction", which immediately became the modern classics of American cinema. Uma is popular all over the world. In honor of Thurman, the pop-rock band "Fall Out Boy" named the song, and the Russian rock band "Uma2rmaH" took her name.

Uma Karuna Thurman was born on April 29, 1970, in Boston. The mother of the future actress, Nena von Schlebrügge, in the past was a famous model in Sweden. But after the birth of her three sons and a daughter, she replaced the podium and glossy covers for the work as a psychologist.

Her father, Robert Thurman, is an Orientalist professor at Columbia University. Before his marriage, Robert was a monk of a Buddhist monastery, and then returned to real life. It was the first American, who was ordained as a monk by Dalai Lama.

Uma’s father named her in honor of the Hindu goddess. The name of the actress is translated as "splendor, light". In childhood, the girl was embarrassed and asked to call her Diana. Later Uma was proud of her rare name.

At school, peers laughed at the tall girl with a large size of the girl's foot: Uma Thurman wears the 42nd size of shoes; the actress's height is 181 cm. Meanwhile, the girl is thin; the weight of the actress is 58 kg. But later, her non-standard parameters made Uma Thurman popular among directors, which helped in her career.

Quentin Tarantino often shot films so that the bare feet of the actress would fall into the camera's lens. Uma's feet can be seen in detail in the video in the dance scene in "Pulp Fiction" and in the scene in the morgue in "Kill Bill".

Uma Thurman wanted to become a model and an actress since childhood. At the age of 15, Thurman left school and went to New York to study acting. About her decision, Uma announced to the family and to persuade them she broke a vintage mirror in the house. Parents did not argue with their daughter, gave the girl 300 dollars for the first time, a book about samurai and some sandwiches.

The girl had to wash dishes, work as a waitress in order to pay for acting courses. Then Thurman went to casting in a modeling agency and passed it thanks to a high growth and unusual appearance.

Uma Thurman's film career began with episodes in second-rate films. Then there was a small role in “The Adventures of Baron Munchausen”. At 18, Thurman received an offer from Stephen Frears and played a seductive bride in the film "Dangerous Liaisons". The beginning actress appeared in intimate scenes.

The film "Henry & June" with Uma has long been classified as a pornographic film. A wide audience saw the film when the ban was partially lifted. After the premiere, Uma got the proposals from the directors more often.

The creative biography of Uma Thurman is closely connected with the name of Quentin Tarantino. The breakthrough of the actress was the film "Pulp Fiction". There were rumors that Quentin Tarantino considers this film his best work. Subsequently, to the question of the press whether he shot something better than the "Pulp Fiction", the director asked in surprise, "Did someone else have made it?".

For the role in this film, Uma Thurman was nominated for Oscar, but she never got the statuette. But at the box office, the film collected 26 times more money than its budget. After "Pulp Fiction", Thurman woke up famous. Her dance with John Travolta became a cult scene of American cinema. The actress could afford to choose scenarios and roles, her fees reached $ 5 million for the role.

The next success of the actress was the role of a Black Mamba in the movie "Kill Bill." There is information that Tarantino has postponed shooting the film for a year so that Thurman could give birth to her child. In the title role, the director saw no one but her.

Fans have a theory that Tarantino movies are bound together by a common universe through hints, repetitive names and actors who appeared in different films. Tarantino did not want to take another actress for the role in "Kill Bill", not so much for personal feelings, but for the integrity of the film world. Uma Thurman also appeared in the second part of the action movie.

Recently, the actress does not have many successful roles. In the film "Nymphomaniac" in 2013, she appeared in the episodic role. The movie "Movie43", released a year earlier, was nominated for "Golden Raspberry". And it can hardly be called successful.

The year 2014 became more successful for the actress. Uma Thurman played the main role in the series "The Slap". The actress drew the attention of the press at the premiere of the series. The object of journalists’ interest was not her new role but changes in the appearance of the actress. Thurman had no age wrinkles; her face looked tired but noticeably younger. Fans also noted the unnatural facial expressions of the star.

The paparazzi immediately started talking about plastic surgery because the actress looked quite differently. Uma Thurman did not comment on the surgery. Journalists turned to plastic surgeons. Doctors, relying on the pictures of Uma, argue that Thurman hardly made the operation with serious interference. It is most likely, the facial expressions and wrinkles of the actress were influenced by injections of Botox. The other changes in appearance are a merit of a make-up.

The relatives and friends of Uma Thurman argue that the woman did not make plastic surgery. According to them, Uma stopped using cosmetics, so the face of the actress looked unusually.

In 2015, the actress played an episodic role in the restaurant comedy "Burnt."

Uma Thurman is a vegetarian since 11 years old. The actress practices yoga, looks after the garden, has fun with her dogs and knits in her free time. Uma calls knitting a workout for the brain, although she notes that the finished clothes look ugly.

For the first time, Uma got married at the age of 20. Her husband, Gary Oldman, was 12 years older, loved women, and drank alcohol. It lasted two years, and then Thurman decided to divorce. Oldman then told reporters that it is impossible to live with Thurman because Uma is an angel. They don’t have children.

The second marriage was also unsuccessful. In the marriage with Ethan Hawke, her colleague in the film "Gattaca", the actress gave birth to two children. In 1998, the daughter Maya and in 2002 the son Levon was born. The children did not save their marriage, and in 2005 the actors divorced. The couple did not hide the reasons for the divorce: Ethan had an affair with the nanny of their children.

Uma Thurman has problems with the circulatory system. Doctors advised her not to give birth to the children, but the woman gave birth to her third child. The father of the third child is a Swiss financier Arpad Busson. They had relations for 7 years. Thurman and Busson announced their engagement twice. In 2014 the couple broke up.

At the Cannes Festival in 2014, Uma Thurman appeared with Quentin Tarantino. The actress and the director have a 20-year-old friendship. However, one day the director jokingly told journalists that he would like his life partner was like Uma Thurman.

This time, the journalists believe that they are not just friends. Uma and Quentin rented one villa for two, at all events came together. The stars hold their hands and Uma put her head on the shoulder of the director.

Everyone who saw them felt the attraction between them. But neither the actress nor the director made an official confirmation or refutation of their romantic relationship.

In 2017, the premiere of a film with Uma Thurman "The Impostors" is planned.

In the spring of 2017, the paparazzi noticed Uma Thurman on the set of the comedy "War with Grandpa". The main roles in the film will be played by Robert De Niro, who openly talks about his age and is not afraid of playing pensioners, and Oaks Figley as his grandson. The picture will tell about the legal wars between the grandfather and his grandson because of the disputed apartment. It is not officially announced the role of Uma Thurman.

In April 2017, it became known that the actress will head the jury of the "Un Certain Regard" program at the 70th Cannes Film Festival. The organizers explained their choice of the 20-year-old career of the actress and the bold roles and decisions of Uma Thurman. Laureates of the program will be announced on May 27. 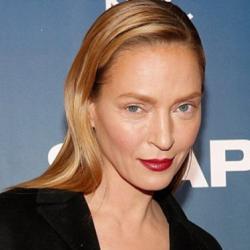