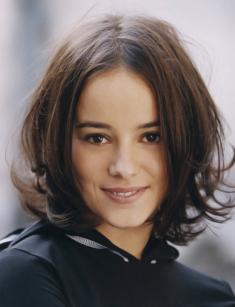 Alizee Jacotey, better known as Alizee, is a French popular singer, who topped the world's charts with her first single «Moi ... Lolita». Then she released a number of studio albums of different genres, which had positive response among her fans.

Alizee was born on the coast of the island of Corsica, in Ajaccio. Earlier no one in her family was interested in art enough to make it a profession. Girl’s father worked as a systems administrator, and her mother had a small business. Like most Corsicans, Alizee’s parents were fond of windsurfing, so they decided to name their daughter after the famous trade wind, which in French dialect sounds like L'Alize. But their younger son got a normal name Johann.

When Alizee was four years old she was fond of dancing, so her parents sent to a dancing studio. Very quickly the girl became the leading dancer and got solo roles in all group dancing. Dancing was not her only hobby. Jacotey was also good at painting, and showed that in the competition organized by a local airline.

The task was to create a logo and paint it on a paper airplane. 11-year-old girl succeeded and won the competition. The child won the vacation trip with her family to the Maldives. Her design was used to paint the exterior of one of the airliners, subsequently named after her.

When Alizee was 15 she participated in the TV talent show Graines de Star. She intended to show a dance number, but it turned out that only singers were needed. Alizee was not confused, she went on the stage, sang a song in English, and failed. A month later, she returns to the casting with a well-rehearsed song «Ma Prière», and won not only qualifying round, but the entire competition, and won award for most promising young singing star.

Her winning performance did not go unnoticed by producers.  The veteran songwriter Mylène Farmer offered Alizee Jacotey to take part in a new musical project. She had an image of a girl, who shocked the public by the contrast between the innocence and provocative appearance.

Alizee recalls, that this factor was the most difficult for her, as in life, she was quiet, modest and shy. However, the first single «Moi ... Lolita» made a huge impression on the whole world and topped the charts for six months. The debut album also had a success and became platinum in just three months. The Song «Gourmandises», as well as «Parler tout bas» and «L'Alize» also topped the charts.

But Alizee was growing up and changed her image from a "Lolita" to that of a more toned-down teenager. The album «Mes Courants Electriques» was the last work of the singer and Mylène Farmer. This happened due to the fact that the album didn’t create the same amazing furor. However, the songs «J'en ai marre!», «J'ai pas vingt ans» and «A contre-courant» are considered to be successful .

The independent career allowed Alizee to experiment with music styles, and each CD was different from the previous one. Among her new songs the most successful were «Mademoiselle Juliette», «Fifty-Sixty», «Les Collines (Never Leave You) », «Alcaline», as well as a cover of Madonna's single.

In 2003, at the music awards ceremony «EuroBest» Alizee Jacotey met musician and fashion designer Jeremy Chatelain. The same autumn, the young people got married, and a beautiful wedding took place in the capital of entertainment, Las Vegas. The singer gave birth to her daughter Annily. The family lived in Paris in their own house, but after nine years of marriage Alizee and Jeremy broke up.

In a year after the divorce, the singer took part in a popular reality show "Dancing with the Stars." Her partner was professional dancer Gregoire Lyonnet and during rehearsals there was real chemistry between them. After winning the show young people started dating, and on June 18, 2016 they married.

It should be noted, that the French singer didn’t stop attending dance classes. She regularly dances flamenco, modern jazz and even classical ballet. What is more, Alizee takes Thai boxing classes in order to be in a good shape. It is important to say, that she is also a  football fan and as often as possible tries to visit home games of "Ajaccio", football club from her hometown. 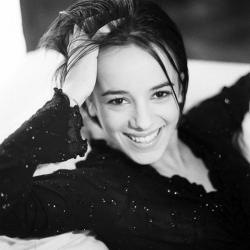