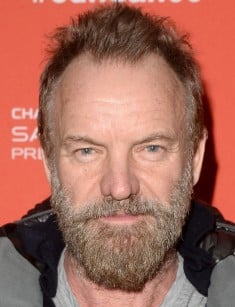 Sting is a legendary rock singer from Britain who became famous due to his solo career.

The boy was born on October 2, 1951, in the town Wallsend in Northern England. The first child of Ernest Matthew Sumner and Audrey Sumner was named Gordon Matthew Thomas Sumner. Later, two girls and a boy were born into the family as well.

Gordon’s father worked in engineering, and his mother was engaged in medicine. Soon, the Sumners purchased a milk store, and Gordon enthusiastically started helping his parents in their business.

Work did not prevent the boy from being good at studies. Gordon learned how to play the piano. At the age of 10, he received a guitar as a present which he would never leave.

Sumner Jr used to sing at church services, went to the swimming pool, and read a lot. The rock clubs of the town where famous rockers’ concerts were held made a considerable influence on the development of the would-be musician.

Jimi Hendrix’s playing impressed the young man significantly and inspired him to create his own works. The young man of many talents, Gordon was athletic and tall (183 cm). He took part in the track-and-field championship of England where he won the second prize. Having finished college, to the surprise of his nearest and dearest, Gordon decided to train to be an English teacher.

With the teacher’s diploma, the young man got hired at the local school. Working as a teacher, the young man finally realized his wish was to be on the stage with his own music. He became a bass guitarist in the jazz band “Newcastle Big Band” and later transferred to the jazz team “Phoenix Jazzmen” where he gained professional experience.

Thanks to his colleagues, Gordon had a nickname Sting which became not only his stage pseudonym but also his second name. “Sting” implies “pin,” “wasp.” In the early 1970s, the musician created his own rock group “Last Exit” which became very popular in the home city. The song “I Burn for You” was recorded in the capital of Great Britain.

When Sting was 26, he received the offer from the eminent London musician Stewart Copeland and his partner Andy Summers to become a member of the group “The Police.” It was a trio whose first versions of the songs “Fall Out” and “Roxanne” were not much popular among young people. Soon after the agreement with the music company A&M was signed and the disk “Outlandos d’Amour” was released, the rock team’ ratings grew higher.

The professional manager Miles Copeland acted wisely in the album singles ad campaign. At the end of 1979, “Roxanne” was included in top 20 songs of the British chart. Due to the release of “Zenyattà Mondatta” and “Reggatta de Blanc,” the musicians’ fame was at its peak.

In 1980, the team toured over the world, and the songs from the new albums were regularly included into English charts and were broadcast on the British radio.

After the tour, Sting created music for independent projects and remained the member of the group “The Police.” However, Steward Copeland was not satisfied with this state of affairs. Even though the fourth album “Ghost in the Machine” was included into the greatest albums of the century according to the magazine “Rolling Stone,” the breakup seemed inevitable. The last album “Synchronisity” came out in 1983. The musicians went on the last tour all over the world and announced the end of the collaboration.

The solo career opened for Sting the new page in his biography. It began with a great success – the disk “Dreams of the Blue Turtles” sold millions of copies in Europe and overseas. The jazz manner and the usage of music motives from Sergei Prokofiev’s suite in the hit song “Russians” distinguished Sting from other rock musicians. In 1987, he went on the international tour during which the second solo album “Nothing Like The Sun” was created.

To record new hots, the singer involved the world’s stars: Eric Clapton, Mark Knopfler, and Andy Summers. The early 1990s albums “Soul Cages” and “Ten Summoner’s Tales” represented by the hits “All This Time,” “If I Ever Lose My Faith In You,” and “Fields of Gold” put Sting to the first lines of music tabloids globally.

In the second half of the 1990s, the records “Mercury Falling” and “Brand New Day” became platinum in the singer’s home country and in the USA. The song “The Desert Rose” from the second album was performed by Sting and the Algerian musician Cheb Mami. The music video created for this single became, in a way, the ad of the car Jaguar S-Type – the musicians moved across the desert sand dunes by it.

Sting’s voice became recognized all over the world; at home, the musician became a Commander of the Order of the British Empire and was knighted. By means of his works, Sting always tries to carry his active social position. After the appalling terrorist attacks on September 11, 2001, the singer released the album “Sacred Love” in which he expressed his pain and sympathy to the deceased and their relatives.

Throughout the 2000s, three albums “Songs from the Labyrinth,” “If On a Winter’s Night…” and “Symphonicities.” The popularity of the albums was gradually declining in comparison with the first solo projects of the singer. In the latter half of the 2000s, the group “The Police” members joined to hold commemorative concerts.

Sting’s songs have often been used in movies. 1993 was marked with the hit “All for Love” that was performed together with Bryan Adams and Rod Stewart. The legendary trio topped the American charts and became the soundtrack of the movie “The Three Musketeers.” Another single “Shape” was created with the guitar player Dominic Miller and jazz musician Larry Adler; it was used by Luc Besson in the drama “Leon: The Professional.”

The 1999 song “Desert Rose” became the main theme in the Brazilian series “Clone.” It also appeared in Japanese and Indian movies. The tablatures and music sheets of these songs are in the open access. The 1990s hit music videos are still broadcast on music channels in the USA and Europe.

For the first time, Sting married the Irish actress Frances Tomelty in 1976. She became known for her work in the series “Midsomer Murders,” “Merlin,” and “The White Queen.” Gordon and Frances have two children – the son Joseph and the daughter Fuchsia Katherine. Because of the family conflicts, the couple broke up in 1984.

After the divorce, Sting lived in the civil marriage with his second girlfriend, the actress Trudie Styler, for 8 years. She gave birth to two sons and two daughters: Brigitte, Jake, Elliot, and Giacomo. The couple married officially only in 1992.

Nowadays, Sting, his loving wife, and second-marriage children live in New York. Besides, the musician’s family own two country houses: one of them is situated not far from Stonehenge, and another is in Tuscany. The singer is happy with Trudie and cannot imagine his life without her. The spouses established the fund that protects rainforests.

Having celebrated his 65th birthday, the rock music legend pleased his fans with a new studio project “57###sup/sup### and 9###sup/sup###.” For his age, Sting looks fit and full of energy. In 2017, he toured with his last album. Now, the singer gives concerts in the USA, and in summer, he plans to visit European countries.

Sting does not forget about social activism. The musician took part in ROCK4EB devoted to the autoimmune disease protection in Malibu in January 2017.

Sting is a devoted dog lover; he has several dogs in his house. Every day, accompanied by his favorite pets, he rides a horse. Walking on a tightrope has become one of the latest hobbies of the musician.

In his country house, Sting and his wife work on the natural economy. They eat only the products they grow themselves. In Tuscany, the musician has his own vineyards where he learned to produce wine. 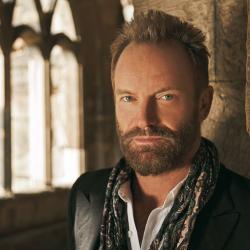