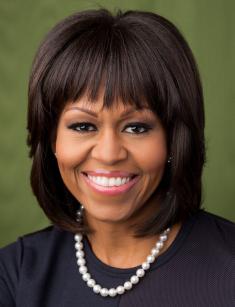 She starred in Sesame Street, had a friendly hug with the Queen of Great Britain: the wife of the 44th American President-Democrat Michelle Obama and she is the personification of democracy. Not hiding the fact that her ancestors were slaves, the future first lady, receiving legal education, defended the rights of national minorities from her youth.

Her priorities changed in the White House but the craving for social activity only increased. The wife of the former American leader launched campaigns on healthy nutrition, the fight against obesity, education in the arts. She was criticized for interfering with her husband's work. Political scientists suggest that Michelle Obama may run for President of the United States in 2020.

The future wife of American President Barack Obama was born in 1964. Her date of birth is January 17. Michelle`s ancestors on her mother`s side were enslaved in North Carolina, working on the Shields family estate. She has Irish roots on her father's side.

She grew up in Chicago together with her elder brother Craig from childhood. Her parents Fraser Robinson III and Marian Shields rented an apartment in a two-story house owned by Craig and Michelle's great-aunt.

Her father worked at the water station. Her mother remained a housewife until her daughter went to high school. Later, the first lady recalled in the interview that she loved to play Monopoly and read in her spare time. The girl also learned to play the piano. Her great-aunt taught music.

When Michelle studied in elementary school, her father was diagnosed with multiple sclerosis. Worrying for her father, she obeyed him in everything and the girl executed the order of the father not to get into unpleasant stories and to be a good pupil. Michelle joined the class for gifted students at the school in the sixth year of her education.

Following the example of her older brother in 1981, the 17-year-old graduate chose Princeton University. The student was educated at the first stage here, a bachelor's degree in the field of art. Despite her specialization, she was engaged in sociological research related to the situation of representatives of national minorities during her studies.

The second stage of Michelle's education was graduate school at during her studies. In 1988, she was awarded the degree of doctor of law. The student participated in rallies, advocating the requirement for universities to hire teachers, who represent national minorities. In the late '80s, the Harvard graduate got a job in the Chicago law firm Sidley Austin LLP. Michelle met her future husband here.

Her specialization in the Chicago firm was the protection of intellectual property. She was invited to work at the mayor's office as an assistant to the mayor three years later. The responsibilities included issues related to the development of urban governance. In 1993, Michelle Obama headed the Chicago office of the volunteer organization "Public Allies," volunteers from the youth were involved in solving social problems.

In 1996, she was hired by the University of Chicago. Obama first served as Deputy Dean of one of the faculties and then became the executive director of the Academic medical center at the University. Later, she received the post of vice-president of the division.

She was a member of the board of the food giant TreeHouse Foods Inc. for some time. This company sells goods through the Wal-Mart network. But she left the organization after her husband criticized the work of the holding in a public speech at the economic forum in 2007.

The victory of her husband in the presidential election marked the beginning of a new stage of social activity for Michelle. The first lady's attention was drawn to the problems of the homeless: she made several visits to shelters and canteens for the poor people. One of Michelle's most significant initiatives was a campaign to promote organic food.

The first lady broke the beds with cucumbers and tomatoes on the territory, that was in front of the White House. The wife of the American leader described in the book her personal experience of vegetable growing, as well as the importance for America of the return to organic food, this book was published in 2012.

Other initiatives of Michelle Obama concerned opposition to childhood obesity, support for women, who combine career and family, promotion of education in the field of art. In 2012, she supported the legalization of same-sex marriages publicly together with her husband. She repeatedly participated in TV shows and appeared on the covers of glossy magazines for the sake of supporting her views.

Michelle often accompanied her husband on diplomatic trips. It is widely known the visit of the American couple to Buckingham Palace in 2009. The American hugged the Queen of Great Britain democratically at a reception organized by Elizabeth II for the heads of G20.

The photo of the frivolous gesture made a lot of noise in conservative Britain but the scandal did not come. The Queen did not focus on it but in 2018, she put on a brooch that Michelle gave her at a meeting with Donald and Melania Trump. The media regarded it as a hint of sympathy for the monarch to the former leader of the United States.

In the summer of 1988, Barack Obama arrived for an internship at Sidley Austin LLP. The management of the company appointed Michelle Robinson as the curator of his practice. The beginning of their relationship put a joint business lunch and soon the young man invited a colleague to the movie on the drama Do the Right Thing of Spike Lee. In 1992, the couple married. The former presidential couple had two children. Malia was born in 1998 and Sasha was born in 2001.

The couple maintains friendly relations with the stars of show business, including Meghan Markle. However, Prince Harry did not invite this couple to his wedding. As the media suggested, it happened because the guest list did not include the current American President. The visit of Obama couple, in this case, could look like an open expression of support for the politician.

Michelle Obama's height is 5,9 feet (180 cm), weight 141 lbs (64 kg). The former first lady always looked elegant with such a stately figure. Her style is characterized by courage, democracy, functionality. Barack Obama's wife prefers fitted dresses with a bright print; it turned out to be models with bare shoulders or outfits decorated with sequins. The designs of her clothes are focused on "young" names: Jason Wu, Saint Erasmus, Isabel Toledo.

Michelle Obama speaks at various public conferences. In November 2018, it was planned to publish her memoirs entitled "Becoming". Michelle Obama has a net worth of $40 million.

In late spring 2018, the couple Obama founded their own production company, which will produce films under contract with Netflix. The public woman leads her account on Instagram she has more than 21 million users.