Chris Brown is an American R&B, hip-hop, and pop singer who began his career at the age of 16. Chris is the first Afro-American singer whose debut single “Run It” topped the country’s music chart. Chris Brown is known as both successful and scandalous person.

Christopher Maurice Brown was born on May 5, 1989, in Tappahannock, Virginia. The future singer and musician is a natural rebel; he has always been living the life he chose.

Only music was interesting to the boy. Michael Jackson and Usher were the teenager’s icons. Brown mastered his talent in the street, among young people. He was dreaming of the great singing career and bulldozing his way.

The mother and the stepfather were happy their son was talented; they did not mind that Chris dropped school at 15. Chris believed that classes were boring, and he was only wasting his time. For this reason, the young man devoted himself to music only.

In a year, the beginning singer recorded the debuting album Chris Brown. These songs blew American charts immediately; the sales broke records, and the album became platinum twice. One of the singles, “Run It” remained number one in Billboard Hot 100 for a month and a half. Six months later, Chris Brown toured in the United States, recorded the materials for the video Chris Brown Journey in Great Britain and Japan, and prepared for the Grammy Awards ceremony.

After the tour, the singer began to work on the next album Exclusive: he had collected enough material. In November 2007, the album was finished. Again, the singer was a success: America, Europe, New Zealand, and Australia welcomed Exclusive. The release started from the second position in Billboard 200; more than five million copies were sold. The golden and platinum singles “Wall to Wall,” “Kiss Kiss,” and “Forever” contributed to the artist’s popularity.

At the peak of his career, Chris decided to experiment on his sounding. At the end of 2009, the new singles were spread via the Internet. However, the audience gave them a cold shower. Perhaps, these results were caused by the great scandal: the young man was accused of assaulting Rihanna.

In 2010, Chris Brown began to work on the album F.A.M.E.; in March 2011, he announced the release. Friends and colleagues supported the musician. The single “Deuces” reached number 14 in the chart: the man did not repeat his early success.

In July 2012, the singer presented the fifth album. The song "Turn Up the Music” was the leader of the English chart. In fall, Chris Brown won the prestigious Billboard Music Awards.

In fall 2014, the sixth studio album, X, came out. It reached the second position in various ratings. As for the following album, Chris Brown collaborated with Tyga. Six months later, the new album Royalty was presented; "Fine By Me,” “Back to Sleep,” and “Zero” were the most famous songs.

Chris Brown often cooperates with other musicians. In 2015, he and the British star Rita Ora sang in a duo and presented the hot music video “Body on Me.” As Rita confessed later, it was challenging for her to shoot for such a video, and it was an exciting experience.

Chris Brown also collaborated with Jordin Sparks (“No Air”), the rapper Bow Wow (“Shortie like Mine”), Lil Mama and T-Pain ("Shawty Get Loose”).

From time to time, the man works as an actor. In 2006, he appeared on the screen for the first time: it was a small role in three episodes of The O.C. The next year, Chris Brown starred in four movies including This Christmas and Stomp the Yard. In 2010, the actor gained the role in the action movie Takers. 2013 was marked with Battle of the Year: The Dream Team and Think Like a Man.

Chris Brown’s personal life is as stormy as his career. In 2005, the musician made friends with the popular R&B singer Rihanna. Three years later, the young people announced they were a couple. However, the relationship lasted for less than a year.

In 2009, Rihanna claimed Chris had attacked her in the car, beat her up, and tried to choke her. The fragile woman was hospitalized with numerous facial and body injuries. After that, the singer was hiding from the police for a while and then surrendered voluntarily. Brown repented. He was given a suspended sentence and underwent a mandatory rehab course.

The singer’s aggression was caused by a mental disorder that had not been diagnosed on time. The man is quite powerfully built; his height is 185 cm., and his weight is 81 kg. Even if Rihanna wanted to fight him off, she could hardly succeed.

Because of the legal proceedings, Chris Brown’s promotion campaigns were stopped; radio channels ceased to broadcast the musician’s singles, and he also canceled his solo concerts and performances at significant events, such as Grammy Awards.

At court, Chris spoke about his troubled childhood; his mother and stepfather regularly beat him. In her turn, the singer’s mother, Joyce Hawkins, confirmed on oath that her son had never behaved aggressively.

Chris Brown did not finish his rehab course: he was expelled from the clinic for violating the order. He spent several weeks in prison; in June 2014, he was released early. To prove his repentance, the artist got a tattoo of the beaten woman on his neck: according to him, he remembered his infamous actions each time he looked in the mirror.

During the break-up periods with Rihanna, the musician was dating other women; journalists noticed him accompanied by the model Karrueche Tran. Later on, Rihanna and Chris tried to restore their relationship; in 2012, they presented the hit “Birthday Cake.” Still, the man could not bring back the woman’s trust. In his following interviews, he said he really loved Rihanna and was ready to marry her. However, some things are over forever.

In spring 2015, the news about Chris Brown’s nine-month-old daughter Royalty came out; the model Nia Guzman was her mother. Journalists had never noticed them together. Soon, the musician posted his daughter’s photo on his Instagram page. Today, the singer tries to spend his free time with the girl.

In 2016, the man revealed his new tattoo: he got his daughter’s image on his back. At that time, the girl’s mother sued the star and demander the alimony should be increased. Besides, the woman told the court that Chris was negatively influencing Royalty and could not handle children at all. However, the court decided that Nia was painting the situation too black. Thus, Chris Brown spends two weeks per months with his daughter.

In 2016, the model Baylee Curran gave the statement to the police: she claimed she was attacked by the man when she was in his house. The musician allegedly threatened her with a gun. Baylee rushed to leave; she immediately went to the police. When the police arrived at Brown’s house, they could not enter for a long time: the musician would not open the door. At that time, he was recording the video and explaining his mental state.

The singer’s arrest ended soon: his lawyer organized the bail ($250 thousand) and claimed the accusation was false.

In August 2017, the artist presented the biographical movie Welcome to My Life where he sincerely talked about his relationship with Rihanna and the causes of the dramatic events. The audience learned that the lovers’ romance lacked stability, and they were confronting each other by force sometimes. Rihanna provoked fights as often as Chris did.

The singer came to the movie presentation together with his mother and daughter. It was the first time he appeared with Royalty on the public.

In October 2017, the album Heart Break on a Full Moon containing 45 tracks was released; its single came out in summer. VEVO Channel presented the official music video; there were several million views in the first days. However, critics’ attitude toward the album was cool: they believed this work did not bring anything new to Chris Brown’s discography and R&B music in general.

At the beginning of 2018, another scandal erupted. The musician posted a photo of his daughter on Instagram; the girl was holding a small monkey. Protectors of animals’ rights were outraged; they reported about the animal.

During the inspection of the documents, the singer did not provide the papers that gave the right to keep the exotic animal at home; the little pet was taken away. The prosecutor’s office in Los Angeles dealt with the situation; Chris Brown could be imprisoned for up to six months. However, this case was hushed in the media.

Naturally, fans worry the singer will have no time for music. Nevertheless, the man presented the result of his collaboration with the American rapper and comedian Lil Dicky in March 2018. The music video “Freaky Friday” was the parody on the comedy Freaky Friday starring Lindsay Lohan and Jamie Lee Curtis. In this video, Lil Dicky switched bodies with Chris Brown, Ed Sheeran, and even the American model Kendall Jenner.

In May 2018, another scandal took place; it was more serious than the monkey thing. A woman whose name has not been revealed sued the singer and accused him of organizing the party where she was raped by Chris’s two acquaintances, a man (some Lowell Grissom) and a woman. It allegedly happened after Brown’s concert: the victim was invited to the musician’s after-party. At the beginning of the celebration, her mobile phone was taken away, and she was offered hard drugs. According to the woman, she was lured to the bedroom where one couple had already been involved in “rest.” Brown left the room but blocked the door. The victim cried, but the man did not answer her screams and requests to let her go. In that very room, she was raped.

The victim’s mother called the police: she located her daughter’s phone via an application. When the police came, they did not notice anything illegal; however, they did not enter the house because Chris Brown did not open the door. From the outside, everything looked calm and peaceful.

Although the artist denied his guilt, he was arrested in July. After his bail was posted, Chris Brown left the prison and confirmed he would continue to tour.

In August 2018, he provided the court with the unusual alibi: when the claimant woman was raped by his friends, Chris Brown was “busy watching pornography and having sex with a woman” without being aware of what was going on in his house. The star’s lawyers asked to remove Brown’s name from the case file and not consider him an accomplice. The police did not rush to satisfy these demands. 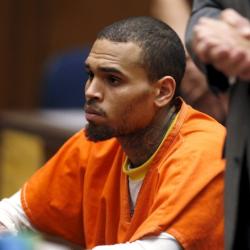