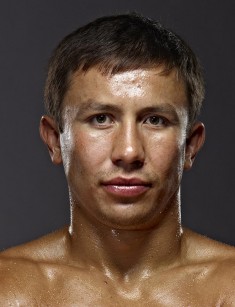 Gennady Golovkin GGG (Triple G) is a prominent Kazakh boxer, winner of many titles and awards, who has had about 40 fights and won each of them.

A future champion was born in Kazakhstan, Karaganda, on April 8, 1982. Gena’s mother is Korean, the father is Russian, but Gennady considers himself a Kazakh. The boy’s father worked in the mine, mother worked as an assistant in the chemical laboratory. The family lived in Maikuduk, which in those days was considered the most criminal district of the city.

Gena has had three brothers, his twin brother Maxim (he is an honored Boxing coach today) and two elder brothers, Vadim and Sergei. The elder brothers died, according to rumors, it occurred during military service. The boy came to the Boxing Club when he was eight years old, and three years later he showed excellent results.

Later, the athlete told that during his youth boxing and wrestling skills were very important. In the turbulent 1990’s there was a feud between the blocks, streets, and communities in all major cities. Young people gathered in gangs and groups, and a trivial fight often resulted in a bloody battle. Every young man should have been able to defend himself, Gena Golovkin was pretty good at it.

The first regional competition became crucial for the young boxer. 11-year-old Gennady could win over his rivals, who at the time were 14-15 years old.

The main difference between amateur and professional boxing is the time of boxing (reduced to 8 minutes), the use of head protection and gloves, and less strict requirements to the fighters on the part of judges. At this level, Gena Golovkin held 350 fights and won 345 of them.

Biography of the athlete is full of many Champion titles, and the Amateur period is not an exception. From 2000 to 2004, Golovkin has received such awards:

Gennady’s era of professional sports started in 2006. He almost immediately became the world star, in the middleweight class (weight class up to 72 kg). He won the first 8 fights inside the distance, beating more experienced opponents on the ring.

The following fights led to the World Championship, which was given to the Kazakh athlete for the first time in 2010. This was preceded by the following victories:

• in 2009 over Spaniard John Anderson Carvalho and Russian Mikhail Makarov in a duel for the WBO Inter-Continental Champion title;

• in 2010 over Colombian Milton Nunez for the WBA interim World Champion title.

In December 2010, Golovkin knocked out Panamanian Nilson Julio Tapia. It happened in the fight for the Retained WBA World Champion title. In 2011, the Champion defended his title in fights with Kassim Ouma and Lajuan Simon, and in 2012 with Japanese Makoto Fuchigami.

Many fans of the Kazakh Champion wonder whether Gennady Golovkin is a left handed or right handed person. The puncher uses a left-hand guard, typical for right-handed people. However, this does not prevent the Kazakh to knock out left-handed opponents, as it happened with Pole Grzegorz Proksa.

The best fights and opponents

In 2012, Golovkin debuted on HBO US channel. Since then, he has had many fights, there are numerous photos of their best moments, and the videos of fights are available to any Internet user.

Almost all fights broadcast by HBO can be included on the list of the Kazakh Champion’s best fights. These include fights with Pole favorite Grzegorz Proksa, British Matthew Macklin, American Curtis Stevens, a fighter from Ghana Osumanu Adama.

In July 2014, Golovkin fought former WBA Champion Daniel Geale. The fight ended in the third round with the victory of Kazakhstani boxer. In October of the same year, Gennady knocked out Marco Antonio Rubio in the second round. The longest fight was with Canadian Martin Murray, who, despite the knockdowns, stood up quickly. The fight lasted 11 rounds and ended via a technical knockout.

Then there were fights with American Willie Monroe Jr., David Lemieux (the fight lasted 8 rounds, but even the supernatural courage and tenacity of the Canadian did not bring him victory). In April 2016, Golovkin knocked out American Dominic Wade, who had never lost before.

In May 2016 Gennady was given WBC World Champion title, because the previous title holder, Saul Canelo Alvarez relinquished it voluntarily.

One of the last fights of the award-winning athlete, who now lives in Los Angeles, was with the IBF World Champion Kell Brook. All Gennady’s Championship belts, in addition to the WBA title, were at stake. Kazakhstan won the fight and Kell Brook ended it with an orbital fracture.

There were rumors about a possible fight between Golovkin and Mayweather, but it is unlikely to happen in the near future.

Gennady Golovkin has such titles and achievements:

• silver medal at the Olympic Games in Athens 2004;

• gold medal at the World Championship in Bangkok in 2003;

• silver medal at the World Cup in Astana, 2002 and other awards.

The personal life of the famous boxer is carefully protected from reporters and it is rarely covered in the society columns. He met his wife Alina in 2000 in his native Kazakhstan. They married seven years later. The couple lives in Los Angeles and they have son Vadim. The boy was born in 2009, his father was courageous enough to be present at the birth to support the woman. Gennady said that the feelings he felt at the birth of his son are impossible to describe.

It is known that Golovkin’s wife has two Diplomas of Higher Education. She rarely visits with her husband social events and never goes to his fights, she prefers to remain in the shadows.

Gennady Golovkin is trying not to show his family life, but he does not hide the details of his interesting friendship with American Ronda Rousey. Ronda is the UFC Women's Bantamweight Champion and a devoted fan of Gennady. Gena has also repeatedly told about his “professional love” to Rhonda. Athletes often chat, and they have frequently met in person and expressed their friendly feelings. 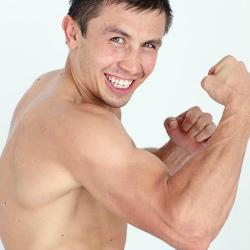