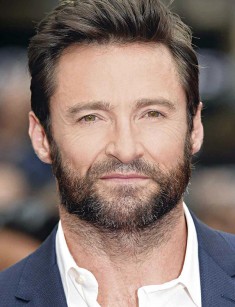 The famous Hollywood actor has many millions of fans today, the most significant awards in cinema and theater, and the movies with Hugh Jackman are very popular. The role of Wolverine brought Hugh Jackman the world fame.

Hugh Michael Jackman was born in Sydney, Australia in October 1968, in the family of English immigrants. The head of the family Christopher Jackman worked as an accountant, the mother Grace Watson was a housewife and bought up children. Hugh was the youngest child in a large family, with sisters Sonya and Zoe as well as brothers Ian and Ralph.

The family began to have serious problems after the birth of the youngest son, Hugh Michael. Grace had postpartum depression, and the boy lived in the family of godparents for a year and a half. The problems did not disappear after his return home. Grace could not get accustomed to a foreign country. One day, when 8-year-old Hugh came home from school, he was in an empty house. Mother left the family and returned to London.

Grace took two her daughters after a few years, and the boys remained under father’s custody. Hugh Jackman made connections with his mother only in 2011.

Hugh Jackman was fond of basketball and even became a team captain at school. After high school, the guy chose the University of Technology in Sydney, where he studied at the Faculty of Journalism. During that period, he took any job, because the parents could not support his son financially. Hugh worked at a gas station and restaurant, entertained children at the Shopping Mall as a clown.

Jackman was asked to choose additional courses shortly before graduation. He chose dramatic art. He was so carried away that he decided to continue training at Department of Theatre. After obtaining his BA in Communication, Jackman went to the second University. It was the Australian Academy of Performing Arts.

Hugh Jackman’s biography would be incomplete without mentioning of his theatrical works. The artist has made no less success in the theater than in cinema. At the end of the Theatre Department in Australia, Hugh could sing and dance well, he played in the musicals Beauty and the Beast and Sunset Boulevard. Both received several awards and acclaim from critics.

In the late 1990’s, the actor received an invitation from the Royal National Theatre in London to play in musical Oklahoma!. The musical was a huge success, and Jackman was twice nominated for Laurence Olivier Award which is recognized as the highest honor in British theatre. Since then, the artist often played on Broadway. Excellent play on the stage and in the movie gave him the right to be included on the list of the best actors of Australia in 1999.

In 2003, Jackman was invited to play in the musical The Phantom of the Opera, but the actor refused and chose the musical The Boy from Oz by his countryman Peter Allen. The play was on for a year and received huge box office. And the actor was awarded three major theatre awards, becoming the owner of the so-called Broadway Triple Crown. Nowadays, Hugh is the only actor who has got all major awards during one season.

Hugh Jackman’s cinematic biography began in his student years. In 1994 the young actor was offered the role in trilling television series Correlli about men’s prison. His future wife Deborra-Lee Furness played a psychologist. Hugh played the role of prisoner Jones, her most troubled patient.

Hugh starred in several TV series for next four years. In 1998 he was offered a major part in the film Paperback Hero. The movie was a success, but the turning point for the actor was 1999 when he got the role of Wolverine in the Hollywood film X-Men at the last moment. Russell Crowe refused from acting in the film. He suggested Jackman as his replacement. The film was released in 2000 and got tremendous success. The role of Wolverine brought Hugh Jackman world-wide popularity. The actor is regularly invited by famous Hollywood directors after X-Men.

In 2001, Jackman was offered the main part in the comedy film Kate & Leopold. The actor appeared in the role of an attractive and romantic nobleman Leopold. Jackman was nominated for a Golden Globe for this work. The same year Hugh together with John Travolta and Halle Berry starred in the action movie Swordfish. From this point, Jackman chooses himself in what movie he would like to play. Moreover, this choice is not always determined by the fee.

In 2003, Hugh Jackman starred in the sequel film X-Men 2, which made him the star, and in 2009 he appeared in a bright cameo in X-Men Origins: Wolverine.

The actor got a lot of roles in 2004. That year the actor starred in the role of a vampire hunter in the fantastic movie by Stephen Sommers Van Helsing. Despite the fact that the film has many historical mistakes, it brought huge box office earnings. Kate Beckinsale, Richard Roxburgh, David Wenham and others helped Jackman to create a unique historical atmosphere in the movie.

In 2006, Hugh appeared in the comedy film Scoop of legendary Woody Allen. He played a promising young politician, an aristocrat, who was taken for a homicidal maniac by mistake. The same year, he starred in the major part in the film The Prestige by Christopher Nolan. He brilliantly played the magician and illusionist Angier.

The movie Australia increased actor’s popularity. It was released in 2008. Jackman has starred with Nicole Kidman there. In the film, Hugh’s hero helps to survive the English aristocrat in the period of the Second World War. The movie was shot in the Australian city of Bowen.

In 2012, director Tom Hooper invited Jackman to play in his film Les Miserables. The movie collected many awards, and the actor received the Golden Globe. In December 2012 the star of Australian actor appeared on the Walk of Fame in Hollywood.

Most critics believe that Hugh Jackman’s best role is the film Prisoners. This detective thriller was released in 2013 and received numerous awards, one of which is awarded by the National Board of Review of Motion Pictures. In addition, the film entered the list of the 10 best films of 2013. Fans of this talented actor are waiting for his new films because they have constant success.

Acting is not the only source of income for Hugh. In 2005 he together with partner John Palermo founded his own production company called Seed Productions. The series Viva Laughlin, released in 2007, was the debut project of the studio.

Hugh Jackman has come to Moscow several times during the advertising campaign of the spin-off X-Men Origins: Wolverine, which was held by the production company of the actor. The actor was invited to the Projectorperishilton TV show during his stay in the capital of Russia.

In 2009, the actor was honored to host the annual Oscar Award ceremony. The actor sometimes participates in advertising.

The Australian actor has a strong family. Hugh Jackman improved his personal life in 1996 when he met Deborra-Lee Furness during the shooting of Correlli. Despite the 13-year age difference (Deborra is older than Hugh), the couple is considered one of the strongest in the Hollywood.

In the spring of 2000, the couple adopted the boy and named him Oscar Maximillian. They adopted the girl 5 years later, she was given the name Ava Eliot. According to Hugh Jackman, his wife has become a wonderful mother to their children. And Hugh Jackman is a great father too.

Hugh Jackman plays golf, goes windsurfing and meditates in his spare time. It is known that the actor doesn’t smoke, and he doesn’t like smoking scenes in movies.

In 2013, the public became aware that the actor was struggling with the disease. Hugh Jackman had a light form of skin cancer. The actor has already had several operations and he does not deny that there may be further neoplasms. That’s why the actor urges everyone to use sunscreen cream. 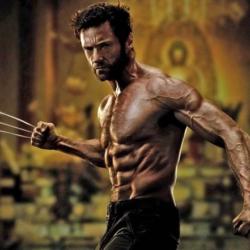