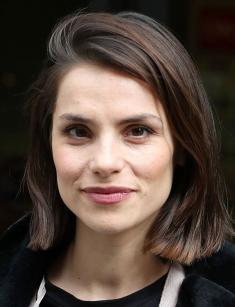 Charlotte Riley is an English actress, who is remembered by fans of the series Peaky Blinders, The Take, Close to the Enemy, as well as the films Wuthering Heights, World Without End, etc. Charlotte was born on December 29, 1981. Her homeland is the village of Grindon from the historic ceremonial County of Durham, which is famous for its rich flora and fauna, Eden Valley, Greenfoot and other picturesque places.

The girl with her brother and sister were brought up in an average family. Her parents were not close to show business people: her father Michael Riley worked as an engineer and her mother Margaret worked as a nurse. According to rumors, Charlotte grew up an artistic child, adoring to show the improvised household performances, where rag dolls played the role of actors and their stage was a sofa.

A distinctive feature of the actress is strabismus, it appeared since childhood but doctors insisted mistakenly that it is only a temporary phenomenon, which is peculiar to some babies. Riley did not pay attention to this drawback (which can be rather called a nice highlight) but the situation only worsened in the school years, when she began to read a lot because of the heavy load on the eyes.

Although Charlotte lived in a low-income family, her mom and dad tried to give her the best education, so the future star of the screens went to the most elite school in the area. Riley was known as a diligent child among teachers, doing homework diligently, participated in school activities and did not show rebellious tendencies as Lily Allen.

After graduating from Teesside High School, in 2000, Charlotte Riley entered St Cuthbert's, Durham University, where she studied humanities. Being a student, the girl was engaged in the University newspaper and also participated in drama productions. Among other things, the future actress realized her writing talent: she wrote theater plays together with her friend Tiffany Wood.

Perhaps, Riley would be a standing lecturer in English linguistics (according to the rumor, she taught children with disabilities), but she realized quickly that her soul is prone to acting. Therefore, in 2005, when Charlotte was 24 years old, the future actress again went to the University. The choice fell on the London Academy of Music and Dramatic Art this time.

Throughout her career in the cinema, Charlotte Riley managed to show herself as a diverse actress: she can appear before viewers in the image of a naive girl to transform into a fatal lady, who is used to break men's hearts. It is not a secret for anybody that future Hollywood stars often start a career with a cameo role and there are endless examples in the vast field of cinema: Seann William Scott, Danny DeVito, Brenton Thwaites, Rose McGowan, etc.

At the beginning of her creative biography, the girl lit up briefly in the series Grown Ups (2007), Holby City(2007), Survey No. 257 (2008) and Inspector George Gently (2008). The British actress got her main role for the first time in 2008. It was a romantic comedy with notes of melodrama Easy Virtue. Also, the brilliant cast of this film includes Colin Firth, Kris Marshall, Kimberley Nixon and other movie stars.

The plot of this film tells the story of a purposeful Englishman John Whittaker (Ben Barnes), who falls in love with a spoiled beauty Larita Whittaker (Jessica Biel). However, this young lady does not realize that she waits for not only a honeymoon and family life with a loved one but also a real fight with her mother-in-law (Kristin Scott Thomas), who does not tolerate frivolous girls.

In 2009, Charlotte Riley was lucky enough to star in a Gothic drama, based on Emily Brontë`s novel Wuthering Heights. The plot of this film is reminiscent of the famous Shakespeare's tragedy. It talks about the feud between the two clans (Earnshaw and Linton) and fatal lot of two lovers, Heathcliff (Tom Hardy) and Catherine (Charlotte Riley).

In the same 2009, life brings Riley and Hardy and the actors work on a film set, playing the crime series The Take. However, Tom did not turn into Romeo this time and appeared before the audience as a violent criminal Freddie. Charlotte also played the wife of his cousin Jimmy (Shaun Evans) – Maggie.

The British actress was popular with famous directors thanks to her artistry and charm of her appearance, the directors, hoping to snatch a tasty morsel, invited a tiny girl (her height is 5,4 feet (165 cm) and weight 114 lbs (52 kg) in the films almost every year. According to rumors, Christopher Nolan paid attention to Charlotte, the creator of the thriller The Dark Knight Rises (2012).

Riley could play the role of a female cat but this role went to Anne Hathaway at the last moment. But in 2012, Charlotte appeared in the historical drama World Without End, which takes place in the 14th century, in the era of global cooling, hunger, the hundred year war and the Black Death.

The actress tried herself in a new genre, playing the role of a journalist in the exciting horror film Stevie Stone's Entity the same year. The plot of this film is built in the style of mockumentary: there were found 34 unidentified corpses in the Siberian forests in the early 21st century. A group of TV broadcasters tries to get to the truth to shed light on the dark mystery that shrouded the heartland of the post-Soviet space.

There is everything in the film that can please fans of the directors Alfred Hitchcock and Oren Peli: a lot of suspense, a sinister atmosphere, ghosts and amateur photography. It is worth noting that Charlotte Riley was able to show viewers her real emotions - fear, madness and despair.

In 2013, the British actress played in the criminal series Peaky Blinders, which resembles the famous film Boardwalk Empire with Steve Buscemi and Michael Pitt. The scenario of the gangster saga is based on the cruel criminal world, in which some group with a distinctive sign reigns: there are deadly blades in peaks of their cards.

In addition to Tom Hardy and Charlotte Riley, Cillian Murphy, Sam Neill, Annabelle Wallis and other movie stars played in this serial film. Also, Charlotte was lucky enough to work on one cinematic site with the famous Tom Cruise in action-fiction action movie Edge of Tomorrow (2014).

Riley's personal life is not a secret: the famous tabloids are still full of photos, where the girl is in the arms of her colleague Tom Hardy. The love story of these actors is similar to the office romance, which later developed into a real relationship and a strong attachment to each other. The British admitted that sympathy was not loved at first sight but the insidious fate managed to do everything to get these talented people together.

It is known that the beloved ceased to hide their relationship from the curious views of the media and got married in the summer of 2014 and later there were rumors that Tom's wife was pregnant. Indeed, the newlyweds had a son in 2015. It is worth saying that the characters of Riley and Hardy are entirely different but, as you know, opposites attract.

For example, Tom loves shopping and fashionable clothes, while his wife will prefer a pair of trendy jeans vintage dress, which was inherited from her grandmother. Hardy is crazy about dogs and Riley has long been afraid of these animals because of the incident that happened to her as a child: when Charlotte was two years old, she was bitten by a yard dog. However, Tom managed to get rid of the phobia of his beloved, when he brought home an abandoned puppy: now Riley doted on a pet named Woodstock.

She is not used to using «Instagram» and other social networks: the girl prefers paper letters to virtual messages. It is also known that the girl's morning begins not with fragrant coffee but with a mug of strong tea: the actress is a fan of this great drink. By the way, according to Riley, it was a mug of tea that brought her closer to her future husband.

In 2016, Charlotte Riley starred in Stephen Poliakoff`s mini-series Close to the Enemy and played a role in the historical drama King Charles III in 2017. Charlotte Riley has a net worth of $8 million.

Presumably, in 2018, the actress will please her fans with her main role in the comedy Swimming with Men: the movie is in the status of postproduction at the moment.