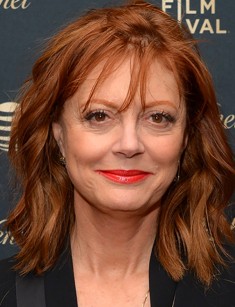 It's almost impossible not to notice big-eyed Susan Sarandon who delighted the movie fans in the pictures Irresistible, The Rocky Horror Picture, Atlantic City, The Witches of Eastwick and other remarkable works. Few people know that Susan hasn't received any special dramatic education and her creative career has begun after the fateful meeting.

Susan Abigail Tomalin ( the real name of the actress) was born on the 4th of October, of 1946 in the largest American city of New York. She grew up in the provincial, but picturesque town of Township of Edison located not far from the megapolis in the State of New Jersey.

Susan grew up in an ordinary large family. Except for her, there were eight more children in her family. Susan has English, Welsh, Irish, Sicilian and Tuscan background.

Her parents – mother Lenora Marie and her father Phillip Leslie – professed Catholicism and tried to bring up their children, following the Christian traditions. That’s why the future star of the screens attended the private Catholic school where the teachers educated the pupils in strictness. Susan remembered that in childhood she wasn't a rebel. Though studying at school, the girl asked too many questions and once she was kicked out of the classroom and her teacher said the "the original sin" burst out in the girl.

The father of the future actress is a creative person who was a producer, and in his free time, he was a solo singer at the local nightclub. Though, despite the fact, young Susan didn't think seriously about the acting career considering that family and marriage could make her happy in the future.

As it often happens, Susan's appearance in the movie industry was marked by chance, to be exact, it was the love at first sight. After the completion of the studies at school, the girl entered the Washington Catholic university where she met her future spouse - the brown-eyed actor Chris Sarandon.

Susan accompanied her husband at various auditions and began to be interested in the faultless world of the movie industry. And, of course, the directors couldn’t but notice the wide-eyed red-haired beauty. However, the path of the actress to the world recognition and popularity wasn't easy as her debut works didn't make the actress the world famous star. It's a paradox that Susan has become known to the movie lovers only when she turned forty years.

Susan had her debut in her filmography in the movie Joe directed by John G. Avildsen (1970). The beautiful actress performed the leading role of Melissa Compton. Melissa joined the hippie community and became drug addicted because of her new lover. It's noteworthy that the picture was nominated for Academic Awards for the professional acting skills of the artists.

In 1971 the beginning actress appeared in the Italian-French movie Lady Liberty with Sophia Loren in the major role. Moreover, Susan also performed the part in the picture The Front Page (1974), Lovin' Molly (1974), The Great Waldo Pepper (1975) and other films.

The eccentric musical The Rocky Horror Picture Show (1975) is considered to be one of the best movies with the early participation of Susan. In this movie, the actress appeared in front of the audience in the character of the naive girl Janet Weiss. Janet together with her beloved Barry Bostwick (Brad Majors) find themselves in the gloomy castle which is owned by the mad scientist-transvestite Dr. Frank N. Furter (Tim Curry). This comedy of absurdity has everything that will be appreciated by the admirers of beautiful and ugly grotesque camp genre.

In 1977 Susan played a role in the melodrama The Other Side of Midnight based on the novel by Sidney Sheldon. The picture tells about the love for the sake of which Noelle is ready for everything.

In 1980 Sarandon performed the role of the cute girl Sally Matthews in the crime melodrama Atlantic City directed by Louis Malle. The plot of the movie is simple and unusual: Atlantic City is the capital of casino and gambling, and the former gangster Lou (Burt Lancaster) lives here.

Though the criminal has changed his reckless life for the peaceful living, he is pursued by high-ranking mafia guys. As a result, the wife of the young swindler Dave appears in the center of the scandal. For her role in the gripping movie Sarandon received her first Ginny award in the nomination for Best Foreign Actress, and in 1982 the beautiful actress got Academic Awards for Best Actress.

In 1983 Susan was lucky to work on the same movie set with David Bowie and Catherine Deneuve in the picture The Hunger. In this movie, she played the role of gerontologist whom the vampire John who lost his youth asks for help.

But the movie The Hunger is not the only mystic picture with the participation of the brown-eyed actress. In 1985 Sarandon appeared in the film The Witches of Eastwick together with Jack Nicholson, Cher, and Michelle Pfeiffer.

This devilish movie tells about the three girls who live in New England and dream about the prince charming. In this movie, Susan performed the role of the ordinary Music teacher who works at the high school. But after the meeting with the Lord of Hell, the woman turns into the red-haired rogue, sorceress bewitched by the charms.

Susan Sarandon started the new century with many remarkable roles. However, the actress performed the major roles more and more seldom and played memorable secondary personages. So, in 2000 she played a role in the movie Joe Gould's Secret which tells about the life in New York of the forties. Susan appeared in the following movies Moonlight Mile (2002), Elizabethtown (2005), Noel (2004), Romance & Cigarettes (2005), etc. Moreover, the actress appeared in the episodic roles of the series.

In 2006 Susan appeared in the movie Irresistible directed by Ann Turner. The drama with the elements of thriller and detective story tells about the woman Sophie Hartley whose life has become a real nightmare. The housewife who lives in the luxurious mansion has some obsessive thoughts every minute: Sophie is sure that somebody pursues her. But the woman who feels herself on the verge of the madness and common sense manages to solve the most terrible mystery in her life.

This movie is saturated with tense turns of the plot that's why the children under the age of seventeen are allowed to watch this movie only in the presence of their parents. Susan Sarandon has got into her character so that she managed to embody the character in despair truly. Therefore, the spectators believe all the emotions of the leading character of this movie.

Sarandon repeatedly found herself in the amusing situations because of her amazing similarity in the appearance with the other actress – Sigourney Weaver. Weaver's fans repeatedly came close to Susan and asked her to sign the treasured autograph. Sarandon reacts at such situations with humor and jokes that it happens because Sigourney is her alternative personality.

As the actress admits, she is a real luddite. Sarandon is indifferent to the novelties in the world of equipment. As the star has confessed, she has hardly learned to type the messages. Susan doesn't prefer to spend her time on the web though the actress is an active Instagram user.

She hardly learned to type messages. Susan does not like to spend the time on the Internet, but the actress is an inveterate user of "Instagram" where on joy to admirers uploads numerous video and a photo. The actress publishes numerous photos and videos on her page to the delight of her admirers.

The seventy-year-old actress has confessed that she is satisfied with her appearance. And at such age, she likes her appearance more than in youth. Sarandon doesn’t deny her plasticity which has helped her to get rid of some age disadvantages.

What about Susan’s love affairs, she has lived with her first husband Chris from 1967 to 1979. After the divorce with the well-known husband the actress changed her maiden name, that’s why Sarandon is her pseudonym.

It’s known that Susan is a feminist and she is against official marriages. The actress confessed that she doesn’t trust this religious institute because the marriage is the destiny of the lawyers, but not the people who are in love. But the circumstances made Sarandon marry officially to her beloved man otherwise they couldn't live together with Chris at the university campus.

In 1988 during the shootings of the movie Bull Durham Susan got acquainted with American actor Tim Robbins, and the actors began to have a love affair. The lovers have lived in civil marriage for 21 years, and in 2009 their family happiness came to an end.

In general, Sarandon has her personal philosophy of life which is different from the public opinion. The woman considers that the relationship comes to an end when the spouses begin to submit each other.

Sarandon is the mother of many children. She has two children from Tim Robbins: Jack Henry (1989) and Miles (1992). Moreover, the actress has a daughter from the director Franco Amurri – the actress Eva Amurri was born in 1985. In 2014 Susan became a grandmother: her grandson Marlowe Mae Martino was born. And sometime later, in 2016 her second grandson Major James Martino was born.

In 2017 there was released the new series Feud with the participation of Susan Sarandon and Jessica Lange in the major roles. The anthology tells about the secret opposition of the actresses Joan Crawford and Bette Davis during the work on the movie What Ever Happened to Baby Jane? Released in 1962.

It’s noteworthy that Sarandon along with other celebrities attended the Cannes Film Festival -2017 festival and the premiere of the movie Loveless directed by Andrey Zvyagintsev.

What about personal life, Susan has made a sensational confession to Pride Source magazine. The seventy-year-old actress announced that she was ready for the relationship both with men and women. 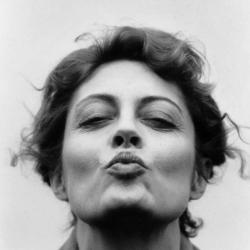