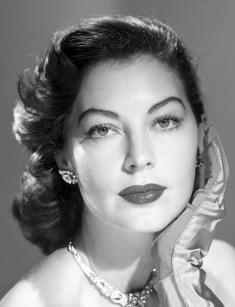 Ava Lavinia Gardner is more familiar as Ava Gardner. She is the brightest Hollywood star in 1940-50s of XX century. She is called the owner of the "face of the angel and the body of the goddess," the most beautiful actress of the last century, the legend of world cinema.

The Hollywood star was born in North Carolina, in the town of Smithfield. Ava is the youngest of seven children. Her parents Jonas and Mary were uneducated people; the only book in their home was the Bible. The children listened to its head, along with the sermons of the Puritan mother about sin and virtue every day. The only hobby of young Gardner was radio, which was switched on Sundays.

Ava grew up beautiful and the mother doubled the portion of instructions and taboos for her 16-year-old daughter. She was forbidden to use makeup, wear new dresses and think about anything other than school. After her father's death, the atmosphere in the house became unbearable. Patriarchal mores and boredom pressed the provincial town. The girl reached the age of 18 and broke out of her mother's care, as if from a cage, at will. Ava Gardner enrolled in secretarial courses in a nearby town.

Ava went to visit her sister in New York a year later. The 19-year-old Gardner was stunned and struck by a multimillion-dollar city. She fell in love with this bright, flickering millions of lights, noisy life and thought how good it would be to stay here. It seemed that somebody heard the passionate dream of a suburbanite. Her sister's husband, a professional photographer Larry Tarr, took some photos of Ava for the shop window.

The camera loved Ava Gardner, the beauty was surprisingly photogenic and looked like a movie star in the pictures. Larry noticed that a crowd of onlookers gathered near the window a couple of days later. There was a clerk from Metro-Goldwyn-Mayer among them. MGM offered the provincial a contract and the courses of actor's skill. The offer was revolutionary for the girl, brought up in a Puritan family. But the temptation to stay in fabulous New York outweighed all that strict mother hammered into her head for a lot of years. So, the creative biography of Gardner began.

The future star of Hollywood had no idea about the profession. She didn't know how to move, to dance, to sing, to play. Ava's Southern accent annoyed the directors but the first tests showed that Gardner is great on the screen. Everyone, who saw the girl was speechless, instantly forgetting about the drawbacks.

Ava Gardner appeared in the episodes and the roles of the second plan for the first five years. Her career stopped. The breakthrough came in 1946: Ava got the main role in the thriller The Killers for the first time. Critics and viewers started talking about the acting abilities of the girls. It was previously discussed only her appearance. In the following movies, melodrama genre noir Singapore and the detective The Bribe, she played the main characters.

In 1951, Ava Gardner starred in a detective melodrama Pandora and the Flying Dutchman, where she appeared in tandem with Mario Cabré. The actress fell in love with Spain, where the shooting took place. Later, after her parting with Frank Sinatra, she lived in the Spanish town of Tossa de Mar for eight years. In 1992, there was a bronze statue of Gardner in memory of the star.

Fame struck Ava Gardner in 1952, when the drama of Henry King's The Snows of Kilimanjaro was released, a screen adaptation of the story of Ernest Hemingway. Ava played Cynthia Green, a beloved of the hero Gregory Peck. The film was nominated for the film award Oscars and made a lot of noise. The actress woke up famous. She was first called the Hollywood star. There were handprints of Ava in the Hollywood Walk of Fame.

The next year brought Ava Gardner the project, which strengthened the artist in the cinema. She starred in John Ford's adventure melodrama Mogambo, where she appeared in the brilliant company of Clark Gable, Grace Kelly. The film Mogambo was nominated for a BAFTA Award. It brought the actress the nomination for the Oscars.

Critics and fans of Ava Gardner called the best movie of the star the drama The Barefoot Contessa, filmed by the cult director of the 1950s Joseph Mankiewicz. It's a movie of the back of show business, Cinderella's story with a dramatic ending. The role of the dancer Mario Vargas claimed Joan Collins, Elizabeth Taylor but the director chose Gardner.

In the 1960s, the Hollywood actress starred in the war drama 55 Days at Peking, the political thriller Seven Days in May and the drama The Night of the Iguana. The black-and-white film, the adaptation of The Night of the Iguana of Tennessee Williams, who received the main film award for the costume design and Gardner, who appeared on the screen with Richard Burton, was nominated in the category of a Golden Globe and the BAFTA. A notable project of the mid-1960s was the dramatic film The Bible: In The Beginning. It is a screen version of several biblical stories. Gardner played Sarah.

The biographical drama Mayerling is called the last project of Ava Gardner. The actress appeared in the image of Empress Elizabeth. The main roles went to Catherine Deneuve, Richard Burton. In the 1970s, she often refused roles and appeared on the screen rarely. Rating projects of the last 15 years of the artist's creative biography were the Soviet-American project The Blue Bird and the disaster film The Cassandra Crossing, in which Ava Gardner starred with Sophia Loren.

Oscar-winning Mickey Rooney drew attention to the sexy brunette, who appeared in the cinema. The actor did not give Ava a pass, gave many gifts but the girl showed unusual in the world of show business stiffness, brought up in a Puritan family. Rooney had to marry a beautiful woman to get Gardner. But Mickey was not going to change his established way of life: Ava, who dreamed of family and children, spent the evening alone. Gardner, who is famous for her resolute character, put an end to the marriage with the star in a year and a half. Rooney's pleas, promises of change, did not affect.

After the separation from her husband, Ava Gardner accepted the advances of a millionaire-aviator Howard Hughes. The industrialist was fascinated by the star seriously, although his love affairs were legendary. The rich man gave the actress many gifts that cost fabulous money. Ava got a house, Hughes gave her shoe boxes, filling them with jewelry. But soon the tutelage of Howard Hughes seemed to Ava harassment: the agents of a jealous millionaire recorded every movement of the actress.

Ava Gardner became acquainted with the musician and intellectual, Artie Shaw, the complete antithesis of the old men. But their marriage lasted six months: she was exhausted from boredom. Later, she shared that family life with Shaw was more annoying than college. The couple divorced in 1945.

After the second divorce, the Hollywood star went to all the trouble. She went back to Howard Hughes for a while. As a result of a short-term relationship with a colleague Howard Duff was pregnant. Gardner remained barren. Having learned about it, the woman plunged into depression. Her dreams of family and children melted, Ava was addicted to alcohol.

Gardner's life changed after her meeting Frank Sinatra, her main love. The Hollywood heartthrob was married and had three children. But in 1951, Sinatra, afraid of losing Ava, broke the marriage bond and married Gardner three days later. The couple's life was like a bullfight. They quarreled, fought and reconciled rapidly. Ava Gardner and her lover registered in the column of scandals of all tabloids. But Sinatra still didn't miss a single skirt. Gardner did not forgive Sinatra's affair with Marilyn Monroe and went to Spain.

Her friendship with Hemingway marked the Spanish period of Ava Gardner's life. They enjoyed the bullfight together but the actress does not hurt the bull. Her torn cheek healed for six months, Ava refused to shoot and roles. The offers from directors came less and less. The actress looked for solitude; she was getting old and went through the changes. In the mid-1960s, the star left bright Madrid, replacing it with rainy London, where you can dissolve in the crowd.

In the mid-1980s, Gardner's health faltered. After two strokes, Ava was bedridden. There were an elderly housekeeper and a beloved dog next to her. A longtime friend of Gregory Peck and Sinatra, who paid for her treatment, visited the extinct star. Ava Gardner had a net worth equal to $200 thousand.

The 67-year-old actress was gone in January 1990: she died of pneumonia, saying: "How tired I am." Sinatra paid off the debts of his ex-wife, took care of the funeral but did not come to tell her goodbye. Gregory Peck took Ava's housekeeper and the dog.