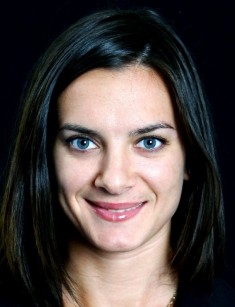 Yelena Gadzhievna Isinbayeva was born on June 3, 1982 in Volgograd. The father of the future sportswoman Haji Gafanovich emigrated from Dagestan and worked as a plumber. Her mother Natalia Petrovna was born in Russia, worked in the boiler room. Later she became a housewife.

The family was not rich, although the parents supported Yelena and her younger sister Inessa in everything. The mother brought up the girls with a firm hand and predicted them a sports career, as she was fond of basketball in childhood and tried to enter the Institute of Physical Education.

At the age of 5, Yelena went to the sports school. There she was trained as a rhythmic gymnast under the guidance of Russian coaches Alexander Lisovoy and his wife. In 1989, Isinbayeva entered the engineering and technical lyceum. She graduated from it in 1997. Then the girl entered the Olympic Reserve School and in 2000 she entered the Volgograd Academy of Physical Culture without exams.

In 2003, Yelena Isinbayeva joined the railway troops. Two years later she became a senior lieutenant, and three years later - a captain. In 2015, the athlete received the rank of major and signed a contract with the Russian Defense Ministry, according to which Isinbayeva taught students in the military school.

In 1997, Yelena Isinbayeva passed the necessary standards and became a master of sports. However, her high growth (174 cm) prevented her from continuing her studies and career as a gymnast. Lena's coach saw pole vault competitions and understood that this sport would be ideal for the girl. Isinbayeva already dreamed of a sports career and realized that she had few chances to become a famous gymnast, so she accepted the offer.

To change sport at the age of 15 is considered a risky step, but Isinbayeva had the necessary will and determination to start training from scratch. Her coach was the honored trainer Evgeny Trofimov, who for the first time in his career was training a girl.

The first jumps of Isinbayeva showed that she had a natural predisposition to this sport. Trofimov only needed half a year to make her a real champion.

In 1998, Yelena made her debut at the World Youth Championships with a jump result of four meters. In 1999 the girl again took part in the championship and with a result of 4.10 m won her first gold medal, setting the first record.

In 2000, Isinbayeva again takes "gold" in junior championship, breaking her own record by 10 cm. When the "pole vault" was added to the program of the Olympic Games, Yelena got a chance to take part in the most prestigious start in four years. However, during the qualification, the girl showed not very good results and did not get into the final of the Games.

Isinbayeva improved her results every year, which increased her popularity and brought a lot of money. For each new world record, athletes receive about $ 50 thousand. Gradually improving her results, Yelena became even more popular.

In 2005, Isinbayeva broke her previous record by 5 cm. She raised the bar to 5.00 m. The athlete admitted that this height was just the beginning, and she was ready for new records. In particular, she wanted to set 36 world records. At the same time, Isinbayeva decided to change the coach. Vitaly Petrov, the coach of the famous pole vaulter Sergey Bubka, replaced Trofimov.

In 2008 Yelena moved to Monaco. There she set her next record at The Super Grand Prix. In August, the athlete again won a convincing victory at the Olympic Games with a jump of 5 m 5 cm.

In 2009, Isinbayeva set two more records at “Pole Vault Stars”, which was held in Donetsk. And also she set one more record at IAAF Golden League in Zurich. However, the World Championships in Berlin brought the sports star the first defeat. In the final of the competition, Yelena couldn’t jump well. In her interview, Isinbayeva said she was very upset by this defeat. The girl was very sorry that she let down her coach.

In April 2010, Yelena again failed at the competition in Doha. The girl didn’t even get a bronze medal. Her old rival Svetlana Feofanova defeated her. After this event, Yelena Isinbayeva decided to leave the sport for a while.

In 2010, Isinbayeva returned to Volgograd and returned to her previous coach Trofimov. After a 1 year break, the girl took part in the contest "Russian Winter", where she won. Further performances of the athlete were quite diverse. Sometimes she set new records and sometimes did not get medals at all.

In 2013, the athlete again stated that she planned to finish her sports career after the World Championships in Athletics in Moscow. This decision was dictated not only by the decline in the activity of the athlete but also by the desire to have a family and children.

Doping scandal and the Olympics-2016

Nevertheless, Isinbayeva continued fitness training and at the end of her career planned to participate at the 2016 Olympic Games in Rio de Janeiro. However, 4 years of hard training resulted in a huge disappointment.

Because of the doping scandal with Russian athletes, the IOC decided to disqualify from Olympic Games-2016 not only the athletes who ruined their reputation but the entire Russian national team.

The sportswoman was persistently preparing for the Olympics in Rio, which could be the logical conclusion of Isinbayeva's professional career. Until the very last moment, Yelena, who was not involved in the doping scandal, challenged the IOC's unfair decision and filed suits. But on July 28 the IAAF (International Association of Athletics Federations) refused the woman.

Isinbayeva and Artem met in 2006 during her training in Donetsk. Nevertheless, after a while, the couple broke up.

Often in her interviews, Yelena said that she wanted a child. In 2014, her dream came true: Isinbayeva gave birth to her daughter Eva.

Yelena had to finish her sports career in order to have a child. She also went to Monaco because of too close attention of the press. The father of the child is the athlete Nikita Petinov. Yelena Isinbayeva married him in December 2014. 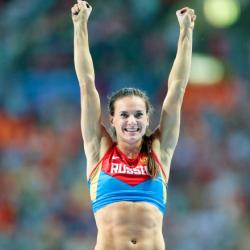