Jason Sudeikis is a talented American actor whose roles are instantly remembered by the audience for his sincerity and spontaneity. Besides, the man has demonstrated his skills and talent as a producer and scriptwriter and also has proved himself as a non-standard comedian. His roles in the movies "What Happens in Vegas", "We’re the Millers" became the most significant works of Sudeikis.

Daniel Jason Sudeikis is the full actor’s name. The future star began his biography in the town of Fairfax in Virginia. Jason was born on the 18th of September, 1975. It is known that the actor has German, Lithuanian and Irish roots.

After a while, after Jason's birth, the Sudeikis family moved to Kansas where the future actor spent his childhood. Jason's parents organized their own business and were far from the world of art. And what about boy's uncle, George Wendt, he played in movies and came on the stage of the local theater. Perhaps, this fact also influenced the future life of Jason who was used to see his relative in different characters.

After Jason had finished elementary school, he continued to study at the Catholic school, and then transferred to Shawnee Mission West High School. Then, in 1990-s, the young man for the first time began to comprehend the basics of the acting skills, having joined the comedy group under the title "ComedySportz".

The public really liked Jason’s comedy pieces, most of which were improvised. The first scenic success filled the aspiring actor with belief in his own forces, Jason got useful acquaintances and his career began taking off.

Soon a talented young man was noticed by the directors. Dave Payne, the director of the comedy "Alien Avengers II", invited Jason Sudeikis to play a role in this picture. Actors George Wendt and the amazing Julie Brown became Jason's on the movie set.

Right after the release of the debut movie the actor was invited to the shootings. This time the young man got a role in adventurous and even hooligan comedy by David Wain "The Ten". The same year 2007 the actor performed in the comedy pictures "Meet Bill" and "Watching the Detectives". Since that moment Jason Sudeikis began to enrich his filmography gradually.

A year later the sensational picture of Tom Vaughan "What Happens in Vegas" came on the screen. The plot of the comedy tells about a woman and a man who after a big party suddenly find out that they have managed to get married at the moment of joy. Certainly, young people are determined to divorce at once, but it’s not that simple. It appears that the couple has won a large sum of money which they can get only in case the judge believes that their marriage is true and sincere.

Ashton Kutcher and Cameron Diaz played the leading roles in the movie "What Happens in Vegas". Jason Sudeikis got a part of the ex-husband of the character of Cameron. This picture brought actor success and public recognition.

Also in 2008 admirers saw Jason Sudeikis in the movie "The Rocker". Two years later new pictures featuring Sudeikis - "The Bounty Hunter" and "Going the Distance" were released. The second picture won the hearts of admirers of romantic comedies. It’s a plain story about two lovers who against the will of their relatives and friends try to save the arisen feeling between them.

Drew Barrymore and Justin Long played the major parts in this movie and Jason Sudeikis played the role of Box — a friend and a faithful drinking buddy of the main character.

The next year of Jason’s movie career was remarked by the movies "Horrible Bosses" and "Hall Pass". The second picture brought actor the long-awaited leading role. The plot of the movie turns around adventures of two married men whose wives decided to give their beloved men a week of "holiday" from married life. However, the joy of friends didn’t last for long: it turned out that being single isn’t as blessed as it seemed at the beginning.

In 2012 Jason Sudeikis appeared in the picture "The Campaign", and a year later two more movies featuring Jason Sudeikis - the comedies "Drinking Buddies" and "We're the Millers" were released. The last movie brought Jason both admiration of the audience, and a nomination for MTV Awards for the Best Comedy role.

A beautiful actress Jennifer Aniston became Jason’s partner in this picture. A drug dealer David Clark (Jason Sudeikis) is the main character in the plot of the movie "We’re the Millers". His illegal business is going well until David has gone into huge debt to the supplier. Then, David should agree to transport the drugs from Mexico so that he can pay off the debts.

The character involves his neighbors into this venture and together with him, they have to perform the decent family of Millers. In the beginning, the plan works but soon it turns out that people who have agreed to give a ride to the Millers are not so simple.

Besides actor's work, Jason has also shown his talent in voicing-over the animated films. In 2013 Sudeikis voiced-over Professor Bomba in the touching and ridiculous animated picture "Epic".

Also, Jason Sudeikis is known as a talented scriptwriter. The TV show "Saturday Night Live" was released under the direction of the actor. Amazing jokes and interesting guests made this TV show favorite for a great number of spectators.

In 2014 Jason Sudeikis appeared in front of his fans as the character of Kurt Buckman, the hero of the black comedy "Horrible Bosses 2". Heroes of the picture — three unlucky businessmen who are ready even for the kidnapping of the son of the main investor for the sake of their own business. However, the friends lose control of the situation and the kidnapped victim tells that he doesn't mind taking part in this adventure and is not against playing into the hands of kidnappers.

Next year a movie "Sleeping With Other People" directed by Leslye Headland was released. And in 2016 film enthusiasts were pleased by Jason Sudeikis's works in the pictures "The Mother’s Day", "Masterminds", "Downsizing" and "Colossal".

The last comedy is the project of the director Nacho Vigalondo. The plot is based on the story of Gloria’s life who is able to turn into the terrible monster. Sudeikis got the role of Gloria’s childhood friend – Oscar, who helps the girl to deal with the situation.

Jason wasn’t alone for a long time: in 2011 journalists and actor’s fans began to talk about a new love affair of Sudeikis. This time the actress Olivia Wilde generally known to the audience by her role of the "Thirteen" in the cult series "House M.D." became a lucky dearie of Jason. In 2013 couple officially announced their engagement.

Despite the busy schedule of the shootings, spouses try to spend each spare minute with their children. Admirers monitor new touching photos on Olivia's Instagram with great pleasure.

At present time Jason Sudeikis continues to play in movies. In 2017 the audience will see new episodes of the series "Son of Zorn" and the first episodes of "Detroiters" - series which also promises to become popular. 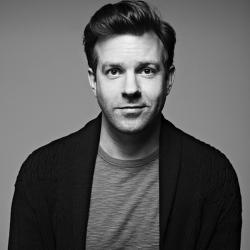