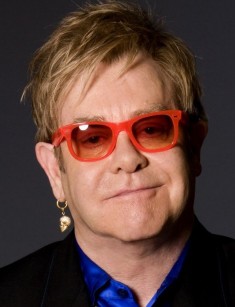 Sir Elton John is an iconic British musician, a Commander of the Order of the British Empire, and a Knight Bachelor. Millions of copies of his albums are sold; his music videos are watched by thousands of Internet users; his worth is approximately $270 million.

Elton John (Reginald Kenneth Dwight) was born on March 25, 1947, in one of the northern areas of London, Pinner. Since childhood, Reginald got interested in music thanks to his creative-minded parents: the mother Sheila played piano with her son, and the father was a Royal Air Force musician.

At the age of four, the would-be musician could pick melodies on piano by ear and listened to records of the best 20-century musicians. The father Stanley Dwight was not happy with Reginald’s hobbies – he considered music studies a silly thing. Even after his son became globally famous, Stanley would not go to his concerts.

Reginald’s parents divorced when the boy was 13. At that time, he began to wear glasses since he tried to look like his idol Buddy Holly. As a result, the boy’s vision deteriorated: he suffered from short-sightedness, and the accessory turned into the necessity.

At 11, Reginald won the Royal Academy of Music grant and studied for six years for free. He went to classes on Saturdays and combined them with the middle school. Four years later, the mother married again; her new partner, the designer Fred Farebrother, supported the teenager’s love of music.

For the first time, Reginald performed in front of an audience at 16. Since that time, he played piano at a local club and sang every week. The mother tried not to miss his shows. The school student got about a pound per evening which was not bad for a young man. He built a substantial money balance to purchase an electric piano.

In 1960, Reginald and his schoolmates founded the group “The Corvettes” that initially performed Jim Reeves’s and Ray Charles’s works (rhythm-n-blues was the most popular music genre at that period). The boys created two one-way records both of which did not gain popularity. In a year, they changed the group name to “The Bluesology” and accompanied quite famous groups (“The Isley Brothers,” “The Bluebelles,” and others).

In 1964, Reginald Dwight dropped school to work at the Mills Music trade department. In a while, he decided to quit the job for “The Blusology” tour in Britain.

In 1967, Reginald fell in love with Linda Woodrow and looked for her favor for a long time. In the end, the couple got engaged, but the young woman made him choose between herself and music. Reginald was so desperate that he thought about committing suicide but came to his senses. At this time, he took the stage name “Elton John” in honor of the musicians Elton Dean and John Long.

In the late 1960s, the company “Liberty Music” held a contest, and Elton John decided to try himself there. He sang several songs from other musicians’ repertoire, but the public did not appreciate it. However, the contest organizer Ray Williams gave him the book of poems by Bernie Taupin as a present. Thus, he initiated their music union that lasted for more than 30 years.

Ray Williams introduced Elton John to Dick James who let them use his recording studio “DJM Studio” where the legendary “Beatles” released their songs. As per William’s request, Dick allowed Elton make his first record. The poet Bernie Taupin met the rising rock star for the first time.

Elton’s debut recording “I’ve Been Loving You” appeared on the market in spring 1968 and even got positive reviews, although failed to bring money. Steve Brown, the new leader of one of the “DJM Records” departments, started persuading Dick James to give the new co-authors freedom in their artistic self-expression, and James agreed.

In 1970, the album “Elton John” came out. In the course of time, Steve Brown resigned since he realized he was not capable of performing his duties in a proper way. He came back to his old position in the EMI advertising department at the radio where he continued to promote Elton John’s works.

With the success of the British music, the English musician was noticed in the US and invited to the trial tour. In fall 1970, he went to America where he was welcomed warmly. The singer’s major show took place in the club “Troubadour.” Elton John and Bernie lived in the USA for three months, came back to England, and then went to America again in a month.

In the early 1970s, Elton John and his team (the drummer Nigel Olsson, the bass guitar player Dee Murray, and the guitar player Davey Johnstone) recorded a soundtrack to “Friends” that many American viewers liked. At this time, the singer purchased a small bungalow.

Once, Elton’s friend Davey Johnstone told him about his dream to release a solo album. As Elton John and the manager John Reed learned it, they tried to help him, but all negotiations with studios were doomed, so they decided to establish their own organization whose main purpose was to assist the mutual friend.

In spring 1973, Elton John and his friends and acquaintances celebrated the foundation of their recording company – “Rocket Record Company”; many guests were invited. In the first year, the label released Elton’s album “Don’t Shoot Me I’m Only the Piano Player” that topped British music charts.

The album “Goodbye Yellow Brick Road” contained the music of various styles and succeeded. In these texts, Bernie Taupin expressed his boldest literary ambitions. The world’s critics call this album the most important creation in Elton’s career. At the same time, the singer found himself in the middle of the glam movement, and his personality was getting more and more popular.

In 1974, Elton John released the album “Caribou” that reached the first position in the USA but received negative responses. The musician tried to rehabilitate after scathing reviews and decided to have a rest and do something different. As an old football fan, he bought the club “Watford” and became its president.

In 1974, Pete Townshend invited Elton to play in Ken Russell’s rock-opera “Tommy.” The director wished that as many musicians as possible participated there. Elton gladly accepted the offer and debuted on the stage as “a local guy,” even though the role was small and took only four minutes of the actual performance.

At this period, the former “Beatles” member John Lennon offered Elton to work on his new solo record “Walls and Bridges.” The single topped the charts, and Lennon agreed to perform on the stage together with the musician and played this song as well as some hits of “The Beatles.”

After an American tour, Elton John faced health problems; according to doctors’ instructions, he was treated in the island Barbados. As he came back, he maintained developing “Rocket Record Company” and the personal football club. In the late 1970s, the punk revolution overran England, and Elton John’s music was no longer relevant. Elton and Bernie stopped collaborating for a while.

For all these years, Elton spent time at home and went out on special occasions only – for instance, he visited his dying friend Elvis Presley. His death made a strong impression on the musician: he began to pay attention to his health because he was afraid to die the way the famous “king” did.

In 1980, the musician gave a free-of-charge show in New York Central Park not far from John Lennon’s house; he performed the song “Imagine” in front of 400 thousand people to honor the musician. Three months later, the ex-Beatle was murdered near that place.

6 years later, the musician lost his voice during the Australian tour. He took part in the show with the Melbourne Symphony Orchestra and had to be operated on the throat after that. Medics removed polyps from Elton’s vocal cords, and his voice changed a little. Twenty years later, he confessed that problem was the result of frequent marihuana intake.

In 1991, Elton opened the AIDS combating fundraising organization; this decision was caused by the death of the Queen leader Freddie Mercury. At this time, George Michael and Elton released a new single together.

In 1995, Elton won the Academy Award for his soundtrack to “The Lion King.” The British Queen knighted him; since that period, he has the right to use the prefix “Sir.” Two years later, the musician performed the song “Candle in the Wind” during the mourning ceremony for Princess Diana; for this occasion, the song was rewritten the day before.

In 2002, Elton John “became” the fifth member of the group “Blue” and sang his hit song “Sorry Seems to Be the Hardest Word.” This song was the leader of British charts. The musician also performed together with the rapper Eminem during the Grammy ceremony.

In 2015, a Russian prankster played a practical joke on the musician: he identified himself as the Russian President and made an appointment with Elton John. Later, Vladimir Putin apologized for this incident.

In 2016, Lady Gaga and Elton John performed in the charity concert in Los Angeles and announced the new collection of the fashion brand “Love Bravery.” The income from the collection sales was to be sent to charity funds.

In 1976, the musician called himself bisexual in the “Rolling Stone” interview. This announcement may be considered a compromise: Elton did not dare reveal his homosexuality at once since he was afraid to upset or even shoo away his fans. In 1984, he married Renate Blauel, but they split up four years later. After the divorce, the musician confessed he was gay. In 2005, Elton and his partner David Furnish legalized their relationship.

His husband is a movie director and public activist; he is 15 years younger than Elton. However, numerous photos together prove that age is not a problem for them. The family has two children born by surrogate mothers. The children adore music and often listen to Elton’s songs. 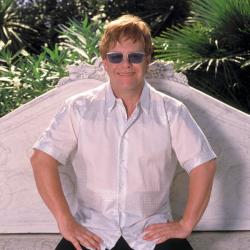