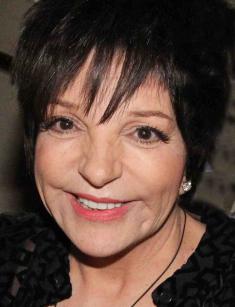 A living legend of the American cinema, the Hollywood icon, who gathered the main awards of world cinema, a great singer and a bright personality. All these stellar qualities are embodied in extraordinary Liza Minnelli.

Liza May Minnelli (we call the actress Liza Minnelli) was born in Los Angeles. The girl turned out to be a real Hollywood child. Her parents Judy Garland and Vincente Minnelli are two of the established stars. Her father is a famous Hollywood director. Her mother is a famous actress and singer. Who else could be the daughter, if not a new star.

Liza appeared at the age of 3 on the screen, under the patronage of her mother. Judy took the girl into the movie, where she played the main role. The film was called In the Good Old Summertime. A creative biography of Liza Minnelli began with this film, which was released in 1949.

After the divorce, Judy, with whom there was a little daughter, constantly took her girl on tour. Liza watches the filming process and life behind the scenes in every detail. Therefore, it is not surprising that the girl decided the way of her star mother.

After her mother's second marriage, Liza had a hard time. The mother was in frequent depression. She had problems with alcohol and then with drugs. Liza had to take care of her born brother and sister. But even it could be dealt, if going on stage with her mother, Minnelli did not feel that next to her was not her mother but Judy Garland, who does not like rivalry and comparison with a young and talented daughter.

In 1963, 17-year-old Liza Minnelli decided to go to New York to make her career and escape from the shadow of her mother. Soon the girl appeared on the stage of the Broadway theater.

In the same 1964, Liza received her first theater award for an excellent role in one production. The star of the actress and singer rises in the sky rapidly. Her roles in the theater became larger. Liza equally loves acting and music in this period, so the actress finds the best way of self-expression – musicals.

In 1965, the artist received the prestigious Tony Award for her work in the musical Flora the Red Menace. A new musical performance called Cabaret was premiered on the Broadway stage a few months later. Liza Minnelli got many prestigious awards and prizes.

The musical Cabaret was filmed seven years later. This musical brought the actress and singer the Oscars, BAFTA Film Awards, a Golden Globe and many other awards.

A cinematic biography of Liza Minnelli began with the film Cabaret. The audience and critics took the released film hits New York, New York, Arthur, Stepping Out, The West Side Waltz, The Sterile Cuckoo and A Time to Live. The last two films brought another Golden Globe and the prestigious David di Donatello Awards.

In the late '80s, Liza was invited to the main role in the action Rent-a-Cop, where the actress played the role of a call girl, an unwitting witness to the murder. The film received the status of a cult film of the end of the decade.

Filmography of the actress has about 40 films. Liza Minnelli starred less and less in the new century. After the appearance in the sitcom Arrested Development in the episodic image, there were minor works in the series Law & Order: Criminal Intent and Drop Dead Diva.

It seems that the only time when Minnelli failed innate flair for star roles was her agreement to play herself in the series Sex and the City. The actress appeared in the 2nd season, which was released in 2010. The artist was awarded the Golden Raspberry Awards for this film. After her appearing in such a significant project, Minnelli appeared on the screens as a cameo twice and she played in musicals – the Muppets and Smash both times.

The musical career of Liza Minnelli developed no less successfully: the singer has 11 studio albums. Liza begins her work on recording music for the first disc at the same time with her first appearance on Broadway. Minnelli released her album "Liza! Liza!" a year after moving.

The artist annually pleased fans of talent with the next studio albums, among which were listed "It Amazes Me," "There Is a Time," "Liza Minnelli," "Come Saturday Morning." The popular songs of the 70s, which instantly made Liza Minnelli famous, were hits "New York, New York," "Money, Money," "Cabaret."

In the late '70s, there was a ten-year break in Minnelli's musical career. In 1989, the singer pleased her fans with the disc "Results," the studio album "Gently" seven years later. The last disc "Confessions" was released in 2010.

Liza Minnelli was awarded her star on the Hollywood Walk of Fame for many years of her musical and acting career.

There are legends about the personal life of the actress. The actress and singer had the official marriage four times. But the number of affairs, which attributed to Liza is much higher than the mentioned number.

The personal life of Liza Minnelli was associated with the singer Peter Allen, the director Jack Haley, the sculptor Marc Giró and the producer David Gest at different times. Named men were spouses of the stars.

In the early 2000s, the celebrity repeated all the mistakes of her mother. Liza was found to be addicted to alcohol and drugs. Minnelli's fourth husband, David Gest, forced his wife to undergo rehabilitation. But she returned to the old way of life after leaving. After her divorce with Gest, the actress again took a course of treatment. Liza managed to stop.

Nowadays, the Hollywood actress helps other drug addicts to escape from the clutches of addiction, donating large sums of money rehabilitation centers.

Since 2013, the actress does not act in films. It is mostly because of the periodic injuries that have plagued Liza since 2011. The first of them was a triple fracture of her leg, which chained the actress to a wheelchair for several months.

In 2014, Minnelli suffered a back injury, after which she needed surgery. Postoperative arising pains provoked Liza Minnelli`s addiction to painkillers and as a consequence potent tools and alcohol. In 2015, the actress had to go to a rehabilitation center once again to take control of bad habits.

In 2016, the artist's friends spread rumors about the deterioration of Liza's condition. The actress published audio, where, according to friends, she said goodbye to them. But in fact, Minnelli thanked her friends for their congratulations, which she received in honor of her anniversary. Judging by the latest photos from the official "Instagram," the actress is still in shape and attends social events.

In 2018, Liza Minnelli announced about her participation in the auction in Beverly Hills. Among the things for sale by the actress were the costume from the film Cabaret, personal dresses, hat, shoes, the script of the film Cabaret with handwritten notes. In addition to her things, there are items from the wardrobe of the mother of Minnelli – Judy Garland at the auction. Liza Minnelli has a net worth of $50 million.