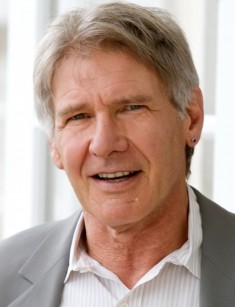 Harrison Ford is a Hollywood film actor. Ford gained his popularity due to his cult roles of the space smuggler Han Solo in the trilogy "Star Wars" and of the archeologist Indiana Jones in the series of the same-name movies. These two cult characters are tightly associated with the actor, so, that in animated movies and comics on these franchises authors continue to use the appearance of Harrison Ford. Offers to restart the universes with other actors in leading roles are met extremely negatively by the admirers of movies.

Nevertheless, the creative biography of Harrison Ford isn't limited to these two franchises. The actor has played roles in more than sixty movies and continues to take part in the movies at present time too. Except for action movies and adventure pictures, the actor also plays in dramas, romantic comedies, thrillers and other movie genres.

Harrison Ford has Russian background - the actor's mother was a Jew of the Russian origin. Harrison was born in Chicago on the 13 of July, 1942, the actor spent his childhood in this American town. Harrison grew a quiet child, he studied well at school. He didn’t have many friends. He often invited girls to the movie theater in hope "to get a kiss in the back row", but this didn’t happen each time.

After school young Ford decided to become a philologist and entered the Ripon College where he came on the theatrical stage in student's play for the first time. This experience impressed the young man so much that Harrison signed up for acting courses.

Being rather shy, Harrison Ford had been unable to overcome stage fright for a long time, but the young actor got through this successfully. However, participation in performances occupied most part of student’s time and he hadn’t enough time for his studies. That’s why the actor was expelled from the college during his last year of studies and Ford set off to conquer Hollywood. By then the guy had finished acting courses and considered himself a professional.

"The Dream Factory" met the young man unfriendly. During 10 years Harrison had to work as a pizza guy and a carpenter, he had to take any job to survive. Despite all the difficulties, Ford didn't give up and continued to attend auditions for actor jobs.

In 1970 Harrison Ford was invited for the role in the picture "Zabriskie Point". It seemed, that luck was with him, but this experience became fatal for the actor: after watching video material, which was shot, directors reached the following verdict - "not suitable professionally". Ford's role was completely cut out from the picture. A disappointed actor decided to leave movie industry.

Who knows how his fate would be if it were not for luck that came to his rescue. Harrison did scenery decorations at the film studio, where he was accidentally found by George Lucas. The director was so impressed that he invited the young guy to shoot in the movie "The American Graffiti". The picture came on the screen in 1973 and radically changed the actor's life.

Next year Ford appeared in the movie "The Conversation". Then he played roles in the movie "Judgment: The Court Martial of Lieutenant William Calley" and in series "Dynasty". But Harrison Ford wanted something more significant.

Soon George Lucas remembered about a talented carpenter and invited him to take part in the new movie. In 1977 the picture "Star Wars: Episode IV – A New Hope" was released. Harrison Ford played the character of the young smuggler and adventurer Han Solo, who helped space insurgents to fight against Empire’s tyranny.

The feature of a new franchise was the fact that counting of series' numbers was started from the fourth episode while the plot assumed the existence of the first movies. The first three episodes representing prequels were released only in 1999 without Harrison Ford's participation as events happened a couple of decades before the picture "A New Hope".

This fantastic action movie was extremely successful but even after this triumph, Harrison Ford was invited to play supporting roles.

However, Harrison Ford established himself in the movie industry much better than his colleagues at the film. Young stars of the trilogy Mark Hamill who played a leading role of the Jedi Luke and Carrie Fischer who performed a role of Princess Leia hadn't received significant roles later. Mark Hamill became the voice actor and Carrie Fischer made a career in editorial business and became a screenwriting editor.

Harrison Ford received global recognition after the role of Indiana Jones in an adventure picture with thriller elements "Indiana Jones: Raiders of the Lost Ark" (1981) directed by Steven Spielberg. Four years later during the shootings of the next part of the film "Indiana Jones and the Temple of Doom," the actor injured his backbone.

But in 1989 Ford returned to this role in the third movie of the franchise - "Indiana Jones and the Last Crusade". In this picture there appeared a father of Indiana Jones whose role was performed by Sean Connery. Actors managed to create an accurate picture in spite of the fact that Connery was only 12 years older than Ford.

In 1995 Harrison Ford presented himself as a romantic and lyrical actor while playing in the romantic comedy "Sabrina". The actress Julia Ormond became Ford's partner in this picture. "Sabrina" - is a remake of the same-name movie of 1954 by Billy Wilder with Audrey Hepburn in the leading role which in turn was based on the play by Samuel Taylor.

With growing popularity, Harrison Ford had got a long-awaited opportunity to choose the roles which could show his talent. His role in the picture "Witness" nominated for Academic Awards became one of them. Directors appreciated his ease, intelligent and skillful acting. From now on the actor was offered to play diverse roles. The actor appeared in the following pictures - "Frantic", "Working Girl", "Presumed Innocent", "Regarding Henry".

In the thriller "Patriot Games" Harrison Ford turned into the CIA agent, and in the crime drama "The Fugitive" he played the character of the surgeon sentenced to an electric chair on a charge of murder of his wife. Movies "Air Force One" and "The Fugitive" featuring Harrison Ford earned a record box office.

In 2008 after long break admirers again saw Harrison Ford as Indiana Jones in the new movie "Indiana Jones and the Kingdom of the Crystal Skull".

In 2015 Harrison Ford returned to his glorifying role of Han Solo in the sequel "Star Wars: Episode VII: The Force Awakens". The movie became both number and subject continuation of the previous part which had been released out 30 years earlier. Also, there have passed more than 20 years between the events of episodes in a new picture and the previous one.

"The Force Awakens " wasn’t shot by Lucas film company, but by Walt Disney corporation which had bought the film company. The blockbuster set records of grosses and became the highest-grossing movie of 2010 and was included in the list of the highest-grossing films of all times of the movie development leaving the major positions to "Titanic" and "Avatar".

In real life, the actor has nothing in common with his desperate heroes. He lives in isolation, he does sports three times a week, enjoys silence and nature. Harrison Ford says that happiness can’t be measured by money, and million dollars fees – just a means to live as he wants.

Harrison Ford had three wives. He got acquainted with the first spouse Mary Marquardt during his student's years. They got married in 1964 and have lived in marriage for 15 years. Mary gave birth to their two children.

Melissa Mathison, a scriptwriter of the cult picture of Steven Spielberg - "E.T. the Extra-Terrestrial" became the second wife of the actor. The couple got married in 1983. Harrison Ford said more than once that his second wife shared his hobbies and his lifestyle too. Two years after the wedding they bought the land in a quiet town of Wyoming and built here a house. Two children were born in this marriage.

Melissa and Harrison seemed to be an ideal couple, but in 2001 they separated. The actor’s new dearie Calista is 20 years younger than he. They also have a child.

Harrison Ford has already been in movie-industry for a half-century but his admirers still want to watch movies with Harrison Ford, and with advances in technologies, fans have received an opportunity to find even old movies with their idol in high quality.

Today there are about 60 roles in an artistic portfolio of Ford and his acting schedule is full until 2019.

Shootings of "Blade Runner 2049" was finished in autumn of 2017. The premiere of this science-fiction movie was set for the 4th of October, 2017. The plot of this picture is partially based on the novel by Phillip K. Dick - "Do Androids Dream of Electric Sheep?".

Harrison Ford played the leading role of Rick Deckard in the picture "Blade Runner 2049". Events of the movie take place in 30 years after the story told in the first part of this movie.

In 2016-2017 there were rumors that movies about Indiana Jones would undergo a global restarting after which the role of the famous adventurer would be performed by a new young actor. This gossip caused a flow of negative reviews of admirers. Later the directors announced that the sequel would become an ideological continuation of the previous parts with Harrison Ford in the leading role.

In 2019 the premiere of the fifth movie of "Indiana Jones" franchise is planned, in which as it is expected Harrison Ford will play the leading role of the archeologist Indiana Jones. The subtitle and the slogan of the picture are kept in secret so far. 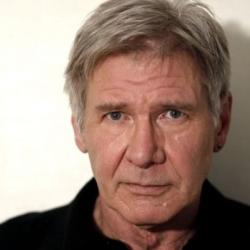