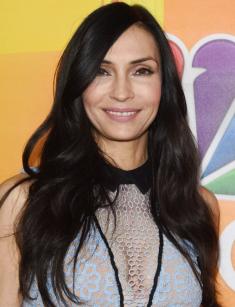 At the age of 54, Famke Janssen is like a "little girl." After all, it is the meaning of the actress’s name in French. The actress rose to fame after the role of James Bond’s girlfriend. She consolidated the success playing Jean Grey in the cult X-Men film series.

Famke Janssen was born on November 5, 1964. The future star spent her childhood and youth in Amsterdam. Famke lived in the capital of the Netherlands until she was 20 years old. She has two sisters.

The girl said in an interview that she was a doorbell baby in the family because her sisters were blond and had blue eyes, but she was a brown-eyed brunette.

Famke does not hide that the family is always her main priority. She was 16 years old when her parents broke up. The girl took the separation heavily because they seemed a perfect couple who loved each other. The divorce left a heavy imprint on her life.

After graduation from high school, Famke Janssen studied economics at the University of Amsterdam. But during the lectures, she dreamed of a modeling career, especially since the girl had the perfect body measurements. She signed with Elite Model Management, and the girl combined modeling work with studies at the university.

At the age of 20, Janssen entered Columbia University and moved to the USA. There she studied literature and tried herself as a dramatic actress. Famke Janssen enrolled in the acting classes of Harold Guskin, which was a good start for many actors, and moved to Los Angeles. This city met the expectations of the young woman.

Famke Janssen got her first bit part in the 1992 film Fathers & Sons. However, she did not make a breakthrough due to unsuccessful directing. Periodically, the directors invited the actress to the shooting, but the roles were insignificant.

The success came in 1995, when one more film in the James Bond series, GoldenEye, was released, in which the actress played the 007’s girlfriend, Xenia Onatopp. This role was followed by several projects: Dead Girl, The Leading Man, Mission: Impossible II, The Faculty.

The role of Jean Grey in the project X-Men increased the popularity of Famke Janssen. After this film, there were several exciting offers, including the part of the wife of a millionaire in House on Haunted Hill and the film Don't Say a Word in which she brilliantly portrayed the wife of a psychiatrist.

Soon the movie I Spy was released, in which Famke proved herself to be a talented comedic actress. Eddie Murphy became her partner. The actress signed a contract to shoot in I Spy after she had to abandon the film Men in Black II, where the woman landed the role of a villainess.

Famke turned down the role in Terminator 3: Rise of the Machines. The actress did not comment on the reasons for this decision.

Janssen returned to the role of Jean Grey in the films X2, X-Men: The Last Stand, The Wolverine, and X-Men: Days of Future Past.

In 2008, the thriller Taken was released, starring Liam Neeson. Famke played the hero’s ex-wife, Lenore. She portrayed the same character in the sequels to the film.

At the same time, she starred in the popular TV series Nip/Tuck, which aired from 2004 to 2010. Critics and viewers warmly welcomed the series and gave Famke’s acting positive reviews.

In 2011, the actress tried her hand at new activities. Janssen worked as a director, screenwriter, and producer of the film Bringing Up Bobby. Famke invited Milla Jovovich to play the leading role.

In 2013, the actress’s filmography included the fantasy film Hansel and Gretel: Witch Hunters, in which she played the role of the powerful grand witch Muriel. Jeremy Renner and Gemma Arterton became Famke’s colleagues on the set.

The same year, viewers saw the series The Blacklist. Three years later, Famke Janssen joined the cast of the project playing the role of Susan "Scottie" Hargrave. In 2017, the spin-off of the TV series premiered, in which Famke’s heroine became the title character. However, the TV show was canceled after the first season.

Famke Janssen does not like to talk about her personal life. She was married to director Kip Williams, whom she met in college. They lived together for 11 years but broke up in 2000. They had no children.

The actress said in one of the interviews that they both were young and broke up when Famke spent a year on the set. She starred in four films and had no time for her family.

Famke Janssen is sure that it is hard for women to pursue an acting career. Men can take wives to the filming, but it is difficult to find a husband who agrees to follow his wife. Famke admits that she had to sacrifice too much for work and success.

She has never thought about kids. The dog has become a replacement for children, girlfriends, and family. She has a close relationship with her sisters and parents. But they rarely see each other. The actress has managed to maintain friendly relations with her ex-husband; she also keeps terms with Kip's relatives.

In 2006, Famke began dating producer and screenwriter Cole Frates. There were also rumors that American actor Anson Mount and Famke Janssen had a long-lasting relationship, although the celebrities did not comment on it.

Unlike many Hollywood celebrities, the actress does not have an officially verified Instagram account. Instead, fans of the actress have registered microblogging, where they post the movie scenes images and Famke's photos found on the Internet. Famke Janssen has appeared in several nude scenes, and there are her hot topless and bikini photos in fashion magazines.

In March 2017, viewers saw their favorite actress playing one of the leading roles in the drama This Is Your Death. The movie All I Wish was quick to follow. It is noteworthy that the film premiered in Russia only in February 2018.

Janssen landed a secondary role in the fantasy comedy Status Update. The story centers on a young man who constantly holds the phone in his hands. But one day all his posts on the Internet are brought to life. This is where the fun begins because it turns out that it is not easy to be in the center of the world.

Three more films with Famke are scheduled to be released in 2018. These are Louisiana Caviar, Primal, and New Amsterdam.

The movies, Every Good Boy Does Fine and American Undercover, go through the production stage.

Famke Janssen has a net worth of $15 Million.