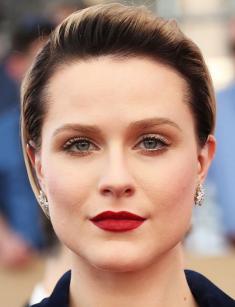 Evan Rachel Wood is an in-demand American actress who began her career as a child and continues to amaze directors and viewers with diverse and profound roles, as well as her musical talent. Her filmography includes a lot of projects, and the woman has an impressive musical career and extraordinary personal life. Viewers remember and love the actress for participating in the drama The Wrestler, for the role of Queen Sophie-Anne on True Blood and the main female character in the HBO series Westworld.

Evan Rachel Wood was born on September 7, 1987, in Raleigh, the capital of the state of North Carolina, USA. She was born in a family of actors who had Jewish and French ancestry. So, the future actress literally grew up in a theater which was headed by her father. In early childhood, she often participated in her father's productions. The actress made her first stage appearance when she was just a few months old.

Although Rachel does not remember it, the relatives say that her first performance was a musical comedy adaptation of A Christmas Carol by Dickens, in which the small talented girl played the Ghost of Christmas Past. At the age of 7, Rachel got the first film role, playing little Susie in the drama Bitter Blood. Her filmography began to include new works quickly, and when she was ten years old, her credentials consisted of 10 films and series.

When Rachel turned nine years old, her parents divorced, and she moved with her mother and younger sister Aden to Los Angeles, while the actress's brothers stayed with her father. It is known that the Hollywood star did not like to study at school, and she did not have good relations with classmates. However, all troubles were compensated by filming in movies.

The young lady became home-schooled due to the busy schedule, so she completed her studies as an external student at the age of 15. In addition to the world of cinema, young Wood had another hobby. She liked martial arts. It's hard to believe, but this fragile-looking girl was awarded a black belt in taekwondo.

Wood made her movie debut in Practical Magic, in which 11-year-old Evan played on the same set with Nicole Kidman and Sandra Bullock.

In 2003, the actress starred in Catherine Hardwicke’s low-budget drama Thirteen. In the film, Evan portrayed 13-year-old Tracy, an exemplary student and daughter, who patiently endured life with an alcoholic mother but changed her priorities after meeting Evie (Nikki Reed), a jadish, light-hearted and cranky peer.

The movie about the challenges of growing up, friendship, and relationships was highly appreciated at the Sundance Film Festival and earned Evan a Golden Globe nomination for Best Supporting Actress.

After that, Wood started to jokingly call her tongue “main celebrity," because after the first night many people asked her if she really made piercing. Although on the film poster the actress is demonstrating her pierced tongue, she wore a special tongue clip during film shoots, while Nikki Reed wore a real earring.

In 2004, Evan had a chance to play in the sensational melodrama Down in the Valley, in 2005 she got the leading role in the tragicomedy Pretty Persuasion, and in 2007 the actress portrayed the schizoid’s daughter in the comedy King of California.

In 2007, the young woman and Jim Sturgess portrayed the lovers, Jude and Lucy, in the film Across the Universe. The action began in 1968, and the heroes’ life is presented as a series of events. The film is shot through with fascinating allusions, for example in one cinema shot Jim and Evan remade a famous photo of Yoko Ono and John Lennon from Rolling Stones cover.

The prominent work was the role of Stephanie, daughter of the great wrestler The Ram in the movie The Wrestler with Mickey Rourke in the leading role. The same year, the actress was invited to the series True Blood, which tells about vampires living among ordinary people since scientists created synthetic blood.

Viewers liked the series for the spectacular action and the unique black humor. In this project, Rachel regularly demonstrated her aristocratic pallor as the vampire queen, Sophie-Anne Leclerq. For seven seasons, the actress chained her heart to her character and later repeatedly stated that she wanted to play a strong, confident woman again.

The movie duo of Wood with Kate Winslet in the miniseries Mildred Pierce is worth mentioning too. The shooting with the world-famous star shocked Evan so much that after filming she declared her bisexuality.

The role of the actress in George Clooney’s political thriller The Ides of March was warmly welcomed. She played Molly, the ally of the Democratic presidential candidate who became the central figure of the scandal, rapidly evolving during the election campaign.

In 2016, Evan played the leading role in the new HBO channel project Westworld. This time, the actress portrayed the sentient android Dolores, and clothes did not bother her, so she often appeared naked in the world of people.

Dolores lived an ordinary life because she was an employee of a theme entertainment park, and her memory was erased every night. But once the program failed, and the android without emotions and desires began to evolve.

From a young age, the actress had a hectic life. On the set of the film Down in the Valley, 17-year-old Evan met Edward Norton, and soon the tabloids discussed the details of the passionate love affair of the colleagues who did not mind a big age gap.

Rachel had a relationship with the outrageous artist, Marilyn Manson, (the actress starred in his music video for the song "Shaped Glasses"). The young people dated, separated and were even engaged. Although the engagement was terminated, according to Rachel, it was the brightest and craziest period of her life.

In 2011, Wood impressed Esquire readers with a showdown of bisexuality. The following year, she unexpectedly married actor Jamie Bell. In 2013, the couple had a son, but less than a year later they divorced.

When she became free, Wood regularly gave the tabloids a reason to write about her new fiancé or girlfriend. The journalists noticed her with Michael Grant, then she spent time with Katherine Moennig, and her photos in the company with Andy Tongren appeared on the Internet.

In 2016, the charming actress admitted that she had been raped twice, and she told more details of the incident in a 15-minute video posted on the Internet. Her former boyfriend committed the first crime, then the owner of the bar did it. It took Evan seven years to admit to herself that what happened was rape. However, the actress did not tell the names of the criminals.

In January 2017, it became known that Wood was engaged to musician Zach Villa, but in September the engagement was broken off.

It is known that at the end of 2017 and the beginning of 2018, the actress’s filmography will include the movies 18 Wheel Butterfly, Viena and the Fantomes, Facing the Wind and Flora Plum. The shooting of the films is already underway, but there is no information about their plots.

Despite the busy schedule, the eminent actress does not forget about her fans, regularly posting photos of shooting and videos of her rest on Instagram.