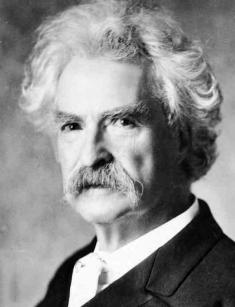 The biography of the American writer Mark Twain, who devoted many of his books to adventures, is itself full of various travels and unexpected twists of fate. The prose writer's full name is Samuel Langhorne Clemens. He was born in the late autumn of 1835, at a time when Halley's Comet appeared in the Earth's orbit. By a strange coincidence, the second flight of the short-period comet over the planet would happen precisely on the day of the writer's death.

The family of the future writer lived in a small village of Florida, Missouri, the U.S. His parents were John Marshall Clemens and Jane (née Lampton). The Clemens experienced difficulties, although his father served as a judge. And soon they were forced to move to the port city of Hannibal, which is located along the Mississippi River. Sam's fondest childhood memories were connected with this place. They formed the basis of the most famous works of the author.

After his father's death in 1847, when Sam was only twelve years old, the family found itself entirely out of money. The children had to leave school and start working. Mark Twain, who fully completed only the elementary school program, got lucky. His older brother Orion had just opened his own printing house, and the future writer got employed there as a typesetter. Occasionally he managed to print his own articles, which did not leave readers indifferent.

At the age of 18, Samuel Clemens went on a journey around the country. He read with an insatiable hunger for knowledge, visiting the best library halls. Mark Twain, who had to drop out of middle school in his childhood, filled the gaps in education in New York's bookstores. Soon the young man got the position of an assistant pilot on the ship.

According to the writer himself, he could have devoted his whole life to work on the Mississippi river, if it weren't for the civil war, which broke out in 1861. For some time Sam got into the ranks of the Confederates but soon went to the Wild West to the gold and silver mines.

The work of mining precious metals did not bring Samuel a lot of money. However, here he shows himself as an observant and witty writer of small essays and stories. And in 1863 was the first time when the writer signed his works with the pen name Mark Twain, taken from the days of his work as a sailor. Mark Twain never signed his books with his real name. Samuel became popular immediately, and his first significant comedy short story "The Celebrated Jumping Frog of Calaveras County" was known in all States.

Several years in a row the newly made writer changed one edition after another where he printed the reviews and stories, improving his skill. Mark Twain performed a lot in front of the public. This revealed another talent of a great speaker and storyteller. During one of his moves around the country, he met his future wife Olivia, the sister of his close friend. It can be seen on the photos from back then that he was a successful and self-assured person. Everything conveys this message: his look, height, and posture. Samuel was having the best time of his life.

The flourishing of creativity

Inspired by the changes in his personal life, the writer easily created several works in the style of realism, which consolidated his name among the classic writers of the XIX century. In the mid-70s, there appeared the famous story The Adventures of Tom Sawyer, which described the childhood of the writer in a slightly different way. Then the novel The Prince and the Pauper saw the light of day and was received very well by the American people. At the same period, Twain released the book A Connecticut Yankee in King Arthur's Court, where the historical events intertwined with the theme of time traveling.

In the mid-80s Samuel Clemens founded his own publishing house, and the first book printed there was the novel Adventures of Huckleberry Finn. In this novel, Mark Twain openly criticized the established order in society for the first time. Twain also produced President Ulysses S. Grant's Memoirs, which quickly became a bestseller. His own publishing house existed until the mid-90s when it finally went bankrupt due to the economic collapse in the country.

The last books of the novelist that were written in a perfected style of a professional did not find the same success among the readers as his first creations. His characters, remaining witty adventurers, now started to get themselves into ambiguous situations, which required a philosophical approach and uncompromising choice. During these years, Mark Twain was awarded several honorary titles from leading universities of the United States. It was very flattering to the man who once upon a time had to drop out of school.

Samuel Clemens cherished his friendship with Nikola Tesla. The age gap of more than twenty years did not prevent them from establishing a creative bond with each other. Together they conducted the bold experiments of the physicist, and in his spare time, Mark Twain often pranked his smart friend as a hobby. But one day Nikola managed to prank Mark Twain back. He suggested to the aged Samuel a particular medicine for rejuvenation. After trying it without any hesitation, Twain felt that he was getting younger every minute. But after a while, he rushed to the bathroom because of severe abdominal pain. According to him, the remedy had a radical cleansing effect on him.

In 1893, fate brought Mark Twain together with financial tycoon Henry Huttleston Rogers, who was known as a great misanthrope and scrooge. But his close friendship with the writer changed him. The banker helped the writer's family to overcome financial difficulties. He also started engaging in charity work and became a philanthropist, which was only revealed after his death. Henry spent a lot of money to support aspiring talents. He also provided employment for people with disabilities.

Samuel Clemens was a very witty person. This was evident in his work as a writer, and in conversation. Many of his statements have become catchphrases that remain relevant to the present day. Here are some of them:

"Giving up smoking is the easiest thing in the world. I know because I’ve done it thousands of times."

"Be careful about reading health books. You may die of a misprint."

"Get your facts first, and then you can distort them as much as you please." Mark Twain's traveling quotes are one of the most famous ones of the author: “Travel is fatal to prejudice, bigotry, and narrow-mindedness, and many of our people need it sorely on these accounts. Broad, wholesome, charitable views of men and things cannot be acquired by vegetating in one little corner of the earth all one's lifetime.”

The dusk of the creative life

The bitterness of irreparable losses poisoned the last decade of the writer's life. Since the beginning of the new century, Mark Twain had to live through the death of three children and his beloved wife, Olivia. At the same time, he finally established himself in his views on religion.

In his last works, The Mysterious Stranger and Letters from the Earth, which were published only years after his death, Twain glorifies atheism in his hallmark sarcastic style. The cause of his death was a heart attack. It took the life of the great writer in the mid-spring of 1910 in Redding, Connecticut. Till this day, the writer is honored throughout the world.

The Mark Twain Library, which contains thousands of rare copies of treasured books of various genres, was founded by Clemens himself in 1908. Since 1998, the John F. Kennedy Center for the Performing Arts annually presents The Mark Twain Prize for American Humor. There is also a Mark Twain's casino, diner, hotel, the museum made out of his apartment and house, a medical center, and many other places named after this classic writer.

At the moment of his death, Twain had nearly $10 million which he lost before filing for bankruptcy at the behest of financier Henry Huttleston Rogers.