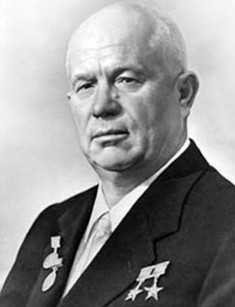 Nikita Khrushchev is one of the most contradictory political figures in the history of the USSR. He was “a son of a peasant” who managed to reach the top of the government and manifested himself with his achievements in “rebuilding” the Soviet society after the suffocating ideological schemes of his predecessor Joseph Stalin. Nikita Sergeevich became a bright Soviet reformуr whose failures and success are still discussed by historians.

Nikita Sergeevich Khrushchev was born on April 15, 1894, into a poor miner’s family in the village Kalinivka, Kursk region. Nikita’s childhood was not happy: the future Soviet leader had to work since the early age to help his parents who lived from hand to mouth.

The boy received his elementary education at a parochial school where he learned how to read and write. In summer, the boy worked as a shepherd; in winter, he studied. In the early 1900s, the family moved to Yuzovka (Donetsk) where Nikita Sergeevich began to work at a machine-building plant at the age of 14. He also learned plumbing there. Four years later, the young man started working in a coal mine and joined the Bolshevik party. He also took part in the civil war.

In 1918, Nikita Khrushchev became the member of the Communist party; two years later, he reached the position of the assistant director for political affairs for the Rutchenkovo mine in Donbas. At this period, the would-be Soviet leader entered Donetsk Mining College, workers’ school (rabfak). As a student, Khrushchev starts his activities within the party which gives him an opportunity to be assigned as a party secretary of the school.

In 1927, Nikita Sergeevich got lucky: he had a chance to see the nitty-gritty of politics. As a representative of Yuzovka, he was invited to AUCP congress where he met “Stalin’s gray cardinal” Lazar Kaganovich who noticed Khrushchev’s political potential and provided some assistance with his rapidly developing career.

Nikita Khrushchev’s real political biography began in 1928 when Kaganovich promoted him to the central office of the Ukrainian Communist Party. In this respect, Nikita Sergeevich had to enter Stalin Industrial Academy: on the republican level, a civil servant was expected to have a higher education.

As he studied at the academy, Khrushchev was actively involved in the party’s practices. Soon, he became the leader of the academy’s political bureau since politics seemed more attractive to him than the educational process. The Soviet authorities appreciated Nikita Sergeevich’s diligence and efforts: he was appointed the second in command (after his protector Kaganovich) in the Moscow city Party organization. In 1934, Khrushchov became the leader of the organization.

In 1938, Nikita Khrushchev came back to Ukraine as the first secretary of the Ukrainian Soviet Socialist Republic. As he gained his first prestigious power trophy, Nikita Sergeevich began to rebuild the Ukrainian administrative staff that had been destroyed by the 1937 repressions. He manifested himself as a merciless fighter against “enemies” – throughout a year, almost 120 thousand inhabitants of Western Ukraine became the target of his repression and were sent away from their home land.

The years of Khrushchev’s governance were marked with the Great Patriotic War in the USSR. The politician was working hard and led the partisan movement behind the enemy lines. By the end of the war, he rose to the rank of the lieutenant general, although some historians believe Nikita Sergeevich should have taken responsibility for some defeats of the Red Army in Ukraine.

After the war, Nikita Khrushchev remained the leader of the Ukrainian SSR. In 1949, he got promoted and became head of the largest party organization in Moscow.

In 1953, Nikita Khrushchev topped the administrative apparatus. While the whole country was mourning Stalin’s death, Khrushchev and his supporters including marshal Zhukov gracefully took advantage of his rivals to the position of the USSR leader. Khrushchev liquidated the main candidate for the position of the secretary Lavrentiy Beria who was announced to be the enemy of the people and executed for his “espionage activities.”

In September 1953, Khrushchev was elected as the General Secretary of the Soviet Union which was a surprise for the majority of Soviet people: Stalin used to represent Nikita Sergeevich as an uneducated simpleton.

Khrushchov’s leadership was marked with significant achievements and failures in the USSR economy. The Corn Campaign was one of the most scandalous events: the Soviet leader decided to turn “the queen of the fields” the main cereal in the country and demanded it should be grown everywhere including the areas where it could not grow and yield a harvest, for instance, in Siberia.

Khrushchev’s reforms should also be mentioned: they were boiling over. This period is known as the Khrushchev’s thaw and associated with destalinization.

Nikita Khrushchev’s reforms are notable for eliminating the catastrophic consequences of Stalin’s repressions in the 1930s, liberation of thousands of political prisoners, some freedom of speech, openness to the Western world, and introducing the relative democracy to the social and political life of the country.

Still, Khrushchev’s economic politics was not just a failure – it was a disaster for the Soviet Union. The ambitious leader of the USSR wanted to “overtake America” and multiply the economic indicators which resulted in the unexpected downfall in the agriculture and starvation.

At the same time, there are several fasinating achievements: Khrushchev developed house-building and accommodated millions of Soviet citizens in their own apartments. The so-called Khrushchyovkas were poorly planned and small, yet they were much more comfortable than communal flats – the population was satisfied.

Besides, it was Khrushchev who initiated the development of the space sphere. During his governance, the first satellite was launched into space and the famous space flight by Yuri Gagarin took place. In addition, Nikita Sergeevich was known as an art patron. He relaxed the censorship in literature, organized TV translation in the majority of the territory, and activated the cinema industry. The movies “Spring on Zarechnaya Street,” “Carnival Night,” “Amphibian Man,” and many other works appeared on the big screen.

Khrushchev’s international politics led to the cold war intensification but simultaneously reinforced the position of the Soviet Union in the world. As he became the country’s leader, Khrushchev initiated signing the Treaty of Friendship, Cooperation and Mutual Assistance that was supposed to oppose the North Atlantic Treaty Organization. The new treaty united the USSR, the Eastern European countries, and East Germany. One year later, there was the first revolt against the Soviet authorities in Hungary.

In 1957, the World Festival of Youth and Students took place on orders from Khrushchev. People from 131 countries participated there. The event had a positive impact on how foreign people view Soviet people but failed to decrease the tension between the USSR and the USA.

In 1961, Germany was undergoing through the political crisis which led to the erection of the Berlin Wall. At this time, the only meeting of Khrushchev and John Kennedy took place, but the next year, the countries exchanged military threats: the USA placed its nuclear weapon against the USSR in Turkey while the Soviet Union did the same in Cuba. This is how the Cuban Missile Crisis began. The danger of the Third World War was more than real. The diplomatic negotiations proved to be effective and decreased the tension. In 1963, the rivals signed the Partial Nuclear Test Ban Treaty.

The decline of Nikita Khrushchev’s political career occurred in 1964. With all his mistakes and miscalculations, the politician was removed from the power by communists. Leonid Brezhnev became the new leader. Nikita Sergeevich was the only Soviet leader who left his position alive.

Nikita Khrushchev is also known for his ambivalent political image. Nowadays, 70 years after his governance, his catchphrases remain recognizable in the society. His “We will bury you” and “Kuzka's mother” are remembered in the USA since the Soviet leader was threatening the Western countries this way. The latter phrase confused the American delegation led by the vice president Richard Nixon: the translation of this idiom meaning “to teach somebody a lesson” was interpreted literary as “Kuzma’s mother.”

Moreover, the picture of Nikita Khrushchev waving his own shoe even became a caricature in the Western media. However, Khrushchev’s son Sergei called this picture a photomontage: in fact, Nikita Sergeevich was trying to get rid of a small stone in his shoe when he was attending a UN meeting on the Hungarian situation.

Nikita Khrushchev’s personal life is as interesting as his political career. The third leader of the USSR was married twice and had five children.

Young Nikita Sergeevich married Yefrosinia Pisareva who died of typhus in 1920. In the six-year marriage, the first five gave birth to two children, Leonid and Yulia. In 1922, Khrushchev lived with a young woman called Marusia who had a child from the previous marriage. The relationship lasted less than two years, but Khrushchev continued to support his stepdaughter financially after the breakup.

The Ukrainian Nina Kukharchuk became Nikita Sergeevich’s second wife. She is known as the first wife of a Soviet leader accompanying him in official meetings. The USSR leader and Nina Petrovna lived in a civil marriage for more than 40 years and married only in 1965.

Nina was a daughter of a peasant and worked as a teacher in the party’s school; this is where she met Nikita Khrushchev. Despite her background, Nina Petrovna was fluent in Russian, Ukrainian, Polish, and French since she graduated from the Mariinsky Female Grammar School. Nina Petrovna used to spend much time on self-education even after the marriage. In the late 1930s, the mother of three children, she began to learn English. The Soviet leader had three children in this marriage: Rada, Sergei, and Elena.

Khrushchev lived with Nina Kukharchuk until his last days. After his resignation, Nikita Sergeevich was sent away from Moscow to the Moscow region dachas, Zhukovka-2. It was difficult for the politician to get used to the asceticism imposed on him. As a former administrator, Khrushchev often criticized the new order that, according to him, was going to lead to the agricultural catastrophe. To his family’s surprise, Nikita Sergeevich got interested in listening to foreign radio stations: Voice of America, BBC, and Deutsche Welle. He also was engaged in kitchen gardening. From time to time, the former leader of the country got depressed which could not but make an impact on his health condition.

He died of a heart attack on September 11, 1971. Nikita Sergeevich was buried at Novodevichy Cemetery, Moscow. Nina Petrovna received words of condolences in telegrams from all over the globe. The monument created by Ernst Neizvestny appeared on the USSR leader’s grave later.

• 1992 – “Weather Is Good on Deribasovskaya, It Rains Again on Brighton Beach” 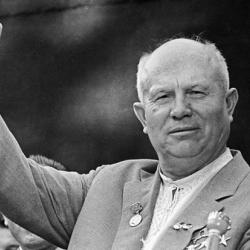