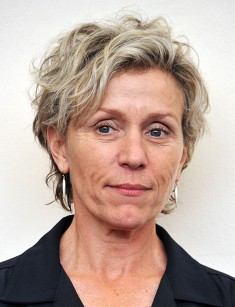 The American actress Frances McDormand (full name Frances Louise McDormand) is known to viewers from different parts of the world. She has been starring in movies, played at the theater, voiced animated movies, produced movies, and acted as a chairperson at the Berlin International Film Festival. Throughout her career, McDormand collected prestigious awards of the world cinematography. She was the laureate of Oscar, Golden Globe, Emmy, and Tony awards; she was also the laureate of Screen Actors Guild Award four times and Independent Spirit Award two times.

The actress created the images of strong, active women: the officer Marge Gunderson, the single mother Mildred Hayes, caring mothers, and troubled teenagers’ instructor. Frances’s play turns even a weak movie into the work of art worth attention. In her youth, McDormand never played boring beauties, and now her characters strike the audience with the strength of their personalities and bright emotions.

The would-be star was born on June 23, 1957, in Chicago. In a year and a half, the baby was adopted by a Protestant couple Vernon and Noreen McDormand. The pastor and nurse’s three children used to spend summer in Christian camps; the eldest daughter Dorothy chose the career of a chaplain.

Frances’ childhood was on the road – the active pastor’s family traveled all over the Southern states. By the time the children went to school, the McDormand settled in the provincial town Monessen, Pennsylvania. The lonely plump girl wearing glasses felt better on the school stage than among people, but she did not get major roles.

In 1975, Frances got her school certificate, in 1979 she became the Bachelor of Arts. During her studies, Frances made friends with Holly Hunter, her roommate. The girls moved to New York where they had enough money to rent an apartment in Brooklyn together.

The actress’s biography began with low-budget performances and shooting in beer ads. She had to work at the cash register in a New York restaurant. 1984 was the turning point for McDormand when Holly Hunter recommended her friend to go to the auditions to the then-unknown Coen brothers.

Frances’s debut in “Blood Simple” brought not only experience – the first movie by Ethan and Joel Coen was positively reviewed by the critics and became the fundament of the long personal relationship between the young actress and Joel Coen. In this art union, five movies appeared; “Fargo” is considered to be the best of them. As the Coen were creating the scenario, they saw McDormand as the leading actress, and she played spotlessly.

For this role, the actress had to get used to speaking with the Minnesota accent and wearing the fake belly. The detective movie released in 1996 was highly appreciated by critics. The role of the sagacious chief of police who, in spite of her pregnancy, successfully finds the kidnapper and murderer, brought four prestigious awards: Oscar, Satellite, Independent Spirit Award, and the title of the best actress in the Screen Actors Guild rating.

2000 was marked with the US critics’ awards; in 2006, McDormand won another Independent Spirit Award. In 2011, the actress starred in the action movie “The Dark Side of the Moon,” played the leading role in the Broadway Theater’s “Good people” for which she got the Tony award in the corresponding nomination.

Having begun at “Blood Simple” shooting, the relationship with Joel Coen turned into the unusually stable for Hollywood family union. In 1994, the family adopted a boy from Paraguay – he got the name Pedro McDormand Coen. Motherhood changed Frances’s life: she started learning Spanish and was fond of the Paraguayan culture. In addition, she was reflecting whether cruel scenes in movies are appropriate.

For thirty years, the actress’s personal life was never marked with scandals. The most criminal information was aired by Frances in the High Times interview: for medical purposes, she smoked cannabis. However, it does not change that it is necessary to bear responsibility for distribution of drugs. The family’s apartment is in the middle of New York, in Manhattan.

In 2012, the star took part in voicing the cartoon “Madagascar 3: Europe's Most Wanted.” In 2015, she voiced the computer fantasy drama “The Good Dinosaur.” At the same time, she was starring in the drama “Promised Land,” the comedy “Hail, Caesar!” and four-part series “Olive Kitteridge” where she was not only an actress but also a producer.

The actress’s fans have the chance to enjoy her new work. On February 1, 2018, the movie “Three Billboards Outside Ebbing, Missouri” was released. Screen Actors Guild has already awarded Frances McDormand for the best actress. The critics of Detroit, Washington, Toronto, Boston, North Texas, and St. Louis hold the same opinion.

In Facebook and Instagram, one can find the actress’s photos in character. In the movie “Three Billboards Outside Ebbing, Missouri,” the strong-willed single mother Mildred Hayes makes the city police to take her daughter’s murder investigation seriously. Martin McDonagh’s scenario and directing gave McDormand the opportunity to show her talent from a different angle and receive the long-awaited Golden Globe. 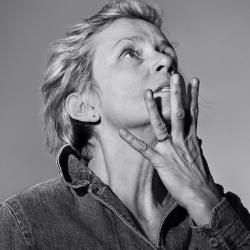