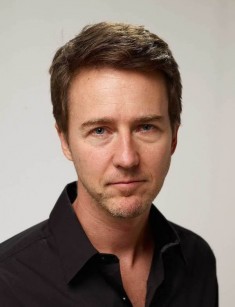 Edward Harrison Norton was born in August 1969 in Boston, Massachusetts, US, but grew up in Columbia, Maryland, US. Since his first day, the boy and his sister Molly led a wealthy life: the mother Robin was a teacher, and the father Edward was a lawyer. The boy’s grandfather was famous for his inventions of supermarkets – he was the architect, the famous lower-income real estate developer, and the creator of many tourist centers in Boston.

Edward Norton began to consider connecting his career with the stage in his childhood. The fell in love with acting at 6 when he watched the play “If I were a princess.” The famous actor admits he could not stop looking at the “magic of theater” – the stage conquered his heart. In the course of time, little Edward started going to Columbia Center for Theatrical Arts under the direction of Orenstein. At 8, he debuted in a local play.

The boy surprised the theater club teachers by his seriousness in acting and sometimes even puzzled them by his questions about the main idea of a character or interesting interpretation of the role played. For Norton, the stage became the place where he could be himself and openly express what he had in his soul. Theater life was more real than mother’s well-balanced breakfasts and father’s lectures about the necessity of the classical education.

Having finished Wilde Lake High School in 1985, Edward Norton entered the Yale University according to his parents’ wish. For the next five years, the prestigious university became the burden for the young man; the only way to escape was to play in performances organized in Yale School of Drama where he enthusiastically developed his acting skills.

Having received the Bachelor’s degree in history, Edward followed his parents’ will again and went to Osaka (Japan) to work in his grandfather’s company “Enterprise Community Partners.” Due to his industry, he became the member of the board of directors. However, as he returned to the US, Norton could not pretend anymore: once, he just did not appear at work. Edward’s action provoked a scandal in the family, but the conversation with the father was brief:

“You can’t just leave everything. Do you understand you’ve betrayed me?”

“I do, but you will forgive me soon. It’s much scarier to betray oneself.”

In a week, Norton went to the one-minute auditions held by the famous playwright Edward Albee and got a role in the play “Fragment”. This is how Edward’s career in the New York theater “Signature” began.

In the 1996 thriller “Primary Fear,” the role of the teenage sociopath Aaron who was in prison became the movie debut of Edward Norton. Norton stole the scene from the main character played by Richard Gere. All awards and nominations of the movie were connected with the young actor one way or another. He received the Golden Globus for this movie and was nominated for Oscar as the best supporting actor.

Later, he was often nominated as well, including the nomination for the best actor award, for the movie about the neo-Nazi “American History X.” Norton played the Nazi who reconsidered his views. The movie was accused of excessive brutality, but at the same time, critics admitted the cruel episodes attributed the special realism to the work.

The next movie became iconic in Edward’s career. The American actor was not nominated for major awards for taking part in the screen adaptation of the novel “Fight Club” by Chuck Palahniuk, but real glory came to him. The faces of Edward Norton and Brad Pitt who played the rebel anarchist with the split personality were appearing on T-shirts, posters, cups, and building walls as graffiti. The screenshot with Norton’s character suffering from insomnia and the iconic list of the fight club rules remain popular on the Internet and have many variations and humorous remakes.

In 2000, Edward Norton tried to work as a director and created the romantic comedy “Keeping the Faith” which was very different from his hooligan’s image. He devoted this movie to his mother Robin who had died of brain cancer in 1997. Answering the journalists’ questions what was special about directing, Edward said:

“Terrible stress. Gray hair. Ill liver. And a lot of pleasure to be like a conductor when you direct many people with their ideas, problems, and solutions.”

In 2006, Norton had a new line of character and took part in the adaptation of “The Painted Veil” by the British classic Somerset Maugham. Naomi Watts became his stage partner.

n the TV series “Stella,” Norton played himself. He also received critics’ positive responses for his acting in the movies “Kingdom of Heaven,” “The Illusionist,” and “The Incredible Hulk.”

In 2010, Norton got the leading part in the drama thriller “Stone.” The actor played the criminal who was ready for anything to be released on probation. Milla Jovovich played his beautiful wife, and Robert de Niro played the inspector who determined the main character’s fate.

In 2014, Edward played a Broadway actor in the comedy “Birdman.” His work was awarded many prizes and good reviews in the world’s movie media. The movie was nominated on 9 Oscars and won 4. Although all the leading actors – Michael Keaton, Edward Norton, and Emma Stone – were nominated, “Birdman” did not win any “actor’s” Oscars.

Together with the producer Bill Migliore and the writer Stuart Bloomberg, Edward Norton created the company “Class 5 Films.”

In May 2015, the comics “Fight Club-2,” the sequel of the book that brought Norton much popularity, was released. Right after the novella appeared, rumors had it that the movie sequel will also be out. According to the media information, Brad Pitt tried to persuade Palahniuk to permit the adaptation. According to the comics plot, much time passed, and the protagonist has a wife and children, therefore, the actors’ age will not be a hindrance to personify the well-known characters. However, there is no information about the possible movie sequel.

In 2016, Norton played in the drama “Collateral Beauty.” Except for Norton, Will Smith and Kira Knightley got the leading parts in the movie about the advertiser disappointed in life.

Now Edward Norton continues to work as an actor, but there were no announced movies with him in 2017. However, Norton joined the comedy cartoon “Isle of Dogs” cast; the movie was released in 2018. The characters are voiced by Scarlett Johansson, Bryan Cranston, Tilda Swinton, and Bill Murray.

Edward Norton had close relationships with popular actresses Salma Hayek and Drew Barrymore. He also dated the singer Courtney Love with whom he toured as a session guitar player in the group “Hole.”

Edward Norton speaks Japanese. He is the fan of the group “Black Flag.”

Norton used to support Eliot Spitzer, the former Governor of New York, and criticized George Bush Jr. He was also the producer of the movie about the US President Barak Obama “By the People: The Election of Barack Obama.”

Norton is often said to be the relative of John Cusack. Indeed, the actors with the similar appearance and height (John’s height is 188 cm, Norton’s height is 183) can be considered brothers, but in fact, they are not related to each other. 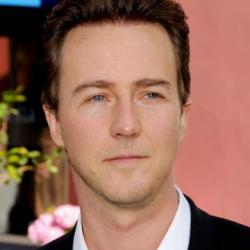