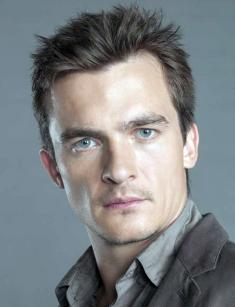 Rupert Friend doesn't like to talk to the press, though journalists consider him as a nice and respectful person to talk to. Whoever meets the actor on the street may get an impression that he tries to avoid getting attention by any means.

However, Rupert believes that people become famous regardless of their own will. They can only control the extent of interference of public into personal.

Rupert William Anthony Friend was born on October 1, 1981, in Stonesfield, England in a wealthy respected family. His mother, Caroline Friend, is a solicitor who is responsible for the preparation of court materials in Turpin and Millar Solicitors. His father worked as a cultural historian. Life in a small town wasn't very exciting, and, like all boys of his age, Rupert often got into fights and spent almost all his free time on the street. The Friends didn't have a VCR, they didn't attend the cinema, and the boy didn't even know about the existence of cinema for a long time. His first movie was about an American archaeologist Indiana Jones, which Rupert watched in the cinema with his uncle.

Young Friend dreamed to travel around the world and do great things as his idol, becoming an archaeologist. But soon after that, he discovered that few archaeologists have such interesting lifestyle as the protagonist of his favorite movie. Then, the future artist drew attention to Harrison Ford, the actor who played the role of Indiana Jones and got a new dream – to become an actor.

Rupert attended the Marlborough located in one of the churches in Woodstock. He also studied at the Cherwell School and d'Overbroeck's College in Oxford.

After school, Rupert secretly from his relatives successfully applied to the Webber Douglas Academy of Dramatic Art in London. Young Friend had the excellent appearance (height 185 cm) and undoubted talent, so even the lack of experience and training wasn't an obstacle for him. Rupert's parents weren't happy with the decision of their son, because they considered acting as a risky business and would prefer that Rupert became a lawyer instead. As Friend admitted, he found himself as a late starter in acting.

In 2010, the actor made a stage debut in a Douglas Carter Beane’s play The Little Dog Laughed, which took place in the London theater.

Friend's career began during his studies. In 2003, the young actor Rupert Friend, who was still a student of the Academy at that time, was invited to the shooting of the British-Australian project Libertine, the leading role of the movie was played by the famous American actor Johnny Depp. The film was the debut for both Friend and Laurence Dunmore, the director of the film.

In November 2004, the film was shown at the cinema. Rupert was named The most promising newcomer and got Satellite Awards as Outstanding new talent for his minor role. The picture was an incredible success, which also affected the popularity of the young actor.

Rupert actively attended castings and got the role of Mr. George Wickham in the historical drama Pride and Prejudice based on Jane Austen's novel. And again, the actor took part in a feature film, starring the famous actors, including actress Keira Knightley. The film was released in 2005 and nominated for numerous awards, including Oscar.

In 2005, American film Mrs. Palfrey at the Claremont was released, in which the actor played the starring role opposite English actress Joan Plowright.

Two years later, Rupert starred in the feature film The Last Legion, based on the events of the collapse of the Western Roman Empire. The actor played a minor role. Although the film wasn't popular, it was a success for the actor. As a result, Friend was frequently invited to American-British projects.

In 2008, Friend made a debut as a screenwriter. Rupert Friend wrote the first film play for a short film called The Continuing and Lamentable Saga of the Suicide Brothers with Tom Mison, his friend and actor. They played the starring roles in the movie.

In 2009, the British actor played a starring role in two films. In a British comedy, Chéri directed by Stephen Frears Rupert played a major role - a spoiled boy Sheri, whose life is closely connected with the character of the legendary American actress Michelle Pfeiffer. The film was warmly received by critics and got three awards for music and costume design.

The second film of 2009 called The Young Victoria is about the life of the young Queen Victoria and her marriage to Prince Albert, whose role was played by Friend with brilliance.

The drama The Boy in the Striped Pajamas is based on the novel by Irish writer John Boyne. The book is published in 50 languages, topped the list of bestsellers by the New York Times, the author is nominated for two dozen awards. In the film, Rupert Friend appeared as a cruel officer of the Nazi army. The protagonist of the film is a 9-year-old boy, whose father was commandant of the concentration camp and who made friends with its inhabitants.

In the film Lullaby for Pi, Rupert played a major role as a man, who turned into a recluse after the death of his wife. Seeing the situation, the owner of the house allegedly mixed up the keys so that a girl with a strange name Pi would get into the apartment of a sad musician, who would be shaken by surprise. As the press wrote, the picture is full of trite clichés, and hardly thought characters. Exactly such a film people would like to see sitting alone by the fireplace with a cup of tea. Renny Harlin, the director of Cliffhanger and Die Hard – 2 presented his vision of the Georgian-Ossetian conflict in 2008, directing the military drama 5 Days of War. Friend played an American journalist who was saved by the Georgian military.

Andy García played the role of Mikhail Saakashvili. A few days before the premiere The New York Times published an article of Anna Neistat who called the film "extremely dangerous" given the geopolitical climate, showing the conflict from one angle.

In 2012, Rupert made a debut as an actor of an American TV-series called Homeland. The project was extremely popular with the audience. By the 3rd season Friend's minor role have become one of the major in the series. The plot focuses on the story of a marine Nicholas Brody performed by Damien Lewis and a CIA agent Carrie Mathison, played by Claire Danes, 4-time owner of the Golden Globe.

In 2015, Pavel Lungin adopted the thriller for the Russian audience and gave the leading roles to Vladimir Mashkov and Victoria Isakova.

In 2014, it was known that Rupert Friend was invited for a role of Agent 47 in Hitman: Agent 47. The actor played the lead character and replaced Paul Walker, who was initially chosen for this role but tragically died. Filming started in March 2014 and took place in Berlin.

The movie is a film adaptation of the popular computer game series about the adventures of an assassin named Agent 47. For the actor, it was the first large-scale and high-budget American film, which is quite able to make him a Hollywood star. The film premiered on August 20, 2015.

The actor attracted the directors' attention, but this didn't mean to bring in the cornucopia of films with his participation. The process of creating a movie is not fast, so the castings of the rating blockbusters of 2016 were completed long before Rupert declared himself as Agent 47. 2016 was calm for the actor.

In 2017, Friend played the role of Vasily Stalin, the son of the leader of the peoples, in the film called "The Death of Stalin" directed by Armando Iannucci. Judging by its name, the film may seem to be a historical drama, but in fact, it's the adaptation of French comics.

In Russia, the film is equal to Alexei Uchitel's "Matilda" by the level of its scandal, it was shown in several cinemas, despite revoking the license. The public strongly criticized the work of British and French filmmakers for misrepresenting facts and insulting human dignity. In 2018, Rupert's filmography was supplemented with a detective film Simple Favor, which is focused on a single mother who earns on blogging. The woman agrees to do a favor for her friend, who then disappears. The character has no choice but to start looking for her. Friend played the husband of the missing girl.

During the filming of the novel's adaptation Pride and Prejudice, Rupert Friend met British celebrity, Keira Knightley. Their relationships developed rapidly, instantly being made public by journalists.

Keira often told the press that she was dreaming of the marriage and family, but Rupert wasn’t much of marrying a star of the British and American cinema. Soon, the actress put up with this situation and started developing her career rapidly.

The relationships between the actors seemed to be so perfect and devoid of scandals that the announcement of the break-up between Keira and Rupert at the end of 2010 was a shock to the public.

The actors broke up suddenly, with no apparent problems and scandals, but they still had the reasons to end the relationships. The initiator of the break was Knightley, who didn't have enough time for personal life. Also, the popularity of the actress and the excessive publicity of the couple, which extremely annoyed Friend, was a considerable reason for such a decision. According to some rumors, Rupert also was very jealous of Orlando Bloom, a Knightley's colleague in the Pirates of the Caribbean. Besides, men are like twin brothers.

When Keira invited the boyfriend to a party with the crew, Friend almost initiated a fight with Bloom. In 2013, Rupert met a Paralympic champion and model Aimee Mullins at a charity event in London. The actor isn't confused that the girl is older than five years and moves on dentures (in infancy Amy lost her legs below the knees because of a congenital disability).

Friend and Mullins became engaged in December 2014 and got married on 1 May 2016.

The couple had a secret wedding. Only a month later, Rupert shared wedding photos on Instagram with his fans.

The actor's wife gives motivational speeches at events for people with disabilities, represented at fashion shows the collection of fashion designer Alexander McQueen, starred in the movie (Twin Towers by Oliver Stone). Aimee enjoys the prostheses of her design. The couple hasn't got children yet.

At the beginning of 2019, the biographical film At Eternity's Gate was released. Willem Dafoe played the role of a brilliant artist. He is also known for the crime drama Mississippi Burning and Platoon directed by Oliver Stone.

Rupert Friend was entrusted to play the younger brother of Vincent van Gogh, Theodorus, who secretly helped the painter with money. The film covers the period of the artist's life in France and his friendship with Paul Gauguin. This role was played by Oscar Isaac.

Now Rupert Friend is starring in the final season of the series Homeland, for which one has already received a nomination for Emmy. The actor is still playing a guy with an uncertain past, whose duty forces him to commit inhumane acts and be responsible for that part of the work, which NSA and CIA prefer not to tell about. Friend will try his luck as a director, filming a sports drama Cornerman. In his debut project, Rupert invited Bruce Willis for the lead role. The film is about the Boxing coach Constantino D'Amato, who raised the Champions Rocky Graziano, Mike Tyson, Floyd Patterson. 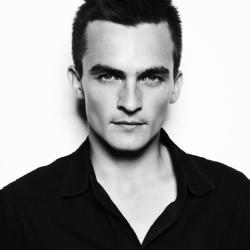