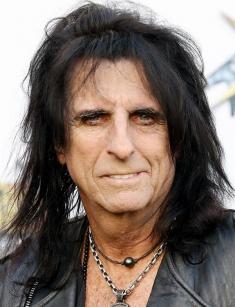 The founder of "The Godfather of Shock Rock," the horror king Alice Cooper, who was born in a family of hereditary clergy of the protestant church. The ancestors of Vincent Damon Furnier's parents Ether Moroni Furnier and Ella Mae were French Huguenots, who once settled in city Detroit.

The boy was born on February 4, 1948. He received his primary education at the Lutheran Church of Detroit. When Vincent was 13 years old, his family moved to Phoenix, where he graduated from high school.

As a child, Vincent found a great love for art. He studied the work of Salvador Dalí together with his friend. At school, the boy took an active role in society and wrote satirical articles in the school newspaper. He dreamed of the glory of "The Beatles" together with his classmates, he creates a teenage rock band, which became famous for its great shock stage techniques. Musicians showed cutting of watermelons using a special guillotine that looked very provocatively during their performances. Vincent became quite successful with his team among school public and the first song "Don't Blow Your Mind," was aired on local radio stations with success.

At the age of 19, Furnier and his band "The Spiders" go on their first small tour, during which he comes up with the idea to change the name to a more sonorous "The Nazz." But it turned out that the team with this name already exists, and you want to come up with something new. Then there was a crazy idea to give the ensemble the name of the fictional heroine of a medieval witch Alice Cooper, who, according to the legend, was executed by burning at stake but her spirit moved into Vincent in the twentieth century and broadcasts from the scene.

So, there was the first character in the history of shock rock, whose followers later became Marilyn Manson, Ozzy Osbourne. They are connected not only by the same musical style but also a great visual similarity in many photos.

Alice Cooper shocked his audience with his antics, all the spectators, whose number sometimes reached 2000, left the concert. The future director Bob Ezrin took it as a good sign and decided to invest in the promotion of a special group. In 1970, the musical group moved to Los Angeles and created the first gold disc "Love It That Death."

The hit "I’m Eighteen" was in the top charts of the country. Three consecutive platinum albums: "Killer," "School's Out," "Billion Dollar Babies" were released. The most popular songs were "Public Animal," "Luney Tune," "Blue Turk" among the singles of this period.

At the age of 26, Alice Cooper begins a solo career. The most successful records of this period are considered "Welcome To My Nightmare," "From The Inside," "Special Forces." A high soloist (Cooper's height is 5,8 feet (177 cm)) with aggressive make-up, rivers of fake blood and electric chairs on the stage, provocative lyrics and aggressive music, it aroused interest in the public. But the audience liked the unusual antics of Vincent. So, after one concert, there was a rumor that Alice tore off the heads of chickens and drank their blood directly from the throat. All of it was so ugly that envious interest.

He was plunged into alcohol and drug addiction for a long time because of his fame. The second half of the 70s flew into oblivion between parties, concerts and moving. The health of the artist was wrong and he decided to undergo treatment in a clinic in New York. It happened in the early 80s. The creative enthusiasm of Alice Cooper diminished during this time. He spends a lot of time in search of new musical material.

In addition to his treatment and recording of new songs, Vincent begins his film career, starring in the films Sgt. Pepper’s Lonely Hearts Club Band and Sextette for the first time. Alice Cooper could be seen on television programs The Muppet Show and Celebrity Squares at that time.

In the 90s, he starred in the cult film about the maniac killer Freddy Krueger, playing his father. And in the early 2000s, Vincent played in the film Prince of Darkness. The director Mike Myers invited his friend in this role, who created the horror comedy Сrossover. Being a colorful character, Alice Cooper starred in several films in the episodic roles. The last work of the musician was his shooting in the popular TV series Supernatural, in which he was invited in 2016.

The other success in the musical biography of Alice began with his victory over the disease of alcoholism and with his return to the big stage. The most significant disc of this period was the album "Trash," on which Alice worked together with such singers as Jon Bon Jovi and Richie Sambora. And the song "Poison" and the video, filmed on it, become the best single of 1989. This hit was the second in world music charts for a long time.

Another creative ensemble brought to Alice Cooper success in the mid-90s. Singing the hit "Hands of Death" together with Rob Zombie, Vincent was included in the nomination for the Grammy Awards in 1996.

The world tour of the star began, during which he visited Russia regularly. He loved the North country. Since the early 2000s, he visited Moscow and St. Petersburg four times. Having a lot of impressions, Alice Cooper creates a record "Dragontown," which was released in 2001.

Cooper gets a star on the Hollywood Walk of Fame two years later. In 2007, Alice was awarded the Mojo Awards. His music videos "Feed My Frankenstein," "Vengeance Is Mine," "Love's a Loaded Gun," "Hey Stoopid" were released during these years.

Since the mid-2000s, the musician has been featured in many outstanding creative duets. In 2007, he sang with his colleague, Marilyn Manson at a festival in the Hungarian capital. Both artists were satisfied with this experience and spoke positively about each other in their interviews.

In 2010, the commercial of the company the Saturn Corporation was released, in which two stars Alice Cooper and the young German singer Bill Kaulitz starred. The clip used humorous techniques and unexpected moves, which delighted fans of both artists.

In 2013, there was a group of stars during the recording of the charity album, which included Alice Cooper, Johnny Depp, and Joe Perry. The supergroup was so fond of musical creativity that the album appeared in the charts, which included cover versions of famous rock songs, including Cooper's hits. And the band was called "Hollywood Vampires."

In his youth, Vincent enjoyed great success with the girls, like any Rock-n-Roll star, so the personal experience of Alice Cooper was quite stormy. He changed his girlfriends for a long time, not thinking about his future. Some love stories were quite tragic. For example, the singer's first girlfriend, the model Miss Christine, who ended her life very quickly, she died of a drug overdose in 1972.

The next civilian wife of Cooper was Cindy Lang, who tried to win money from the star a few years after their breakup. Another passion of the musician was considered Raquel Welch in the mid-70s, who had the title of the first beauty of Hollywood.

But the singer's heart was captured only by the dancer from his show Sheryl Goddard, whom he married in 1976. The girl suffered from her husband`s alcoholism for a long time and then filed for divorce. A few years after Cooper's formal breakup and treatment at the alcohol center, the family is reunited and happy to this day. Vincent was an exemplary family man, who likes to spend evenings with his family.

Sheryl Cooper gave birth to her three children during this time: daughters Calico, Sonora and son Dash. The older children of Cooper are engaged in music and acting as well as their parents.

Vincent is a passionate nature. He is attracted not only by the stage and musical art but also by sports. His hobby is golf. In the mid-90s, he founded his club, in which he holds annual tournaments. Alice transfers all the money from the competitions to the charity fund. The singer took part in the programs, which are dedicated to his favorite sport many times and also wrote the book Alice Cooper, Golf Monster about his passion, which is autobiographical.

Charity is one of the areas, in which the singer is engaged seriously. On the eve of 2017, Alice Cooper invited Jim Carrey to the annual event to raise money for needy Indians, with whom he sang the song "No More Mr. Nice Guy" and "School's Out."

Today, the singer is realized in the musical work completely: he created more than 20 gold discs, sold more than 50 million copies of albums worldwide. Alice Cooper owns a restaurant and hosts the author's program Nights with Alice Cooper. Alice Cooper has a net worth of $40 million.