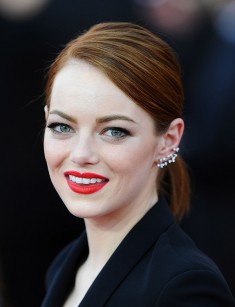 Emma Stone is a Hollywood actress whose talent has been marked with fans’ recognition as well as prestigious prizes: The Golden Globe, The Academy Award, BAFTA, and a number of Screen Actors Guild Awards. Emma has been called one of the most talented actresses of the generation. Besides, she was included in the Forbes list as the highest-paid actress.

Emma was born in the town Scottsdale in Arizona. The would-be actress’s father Jeff Stone was the head of the general contracting organization. The mother Kristina Yeager was a housekeeper. Emma’s brother Spencer is two years younger than she.

The girl went to the Sequoya primary school, the Cocopah secondary school, and the Xavier Catholic school for girls. She studied there a little and continued her education being homeschooled.

At primary school, Emma participated in school performances and took great interest in theater. The mother organized the girl’s studies at the studio held by Valley Youth Theater. Emma played her first role in the play “The Wind in the Willows” at the age of 11. Overall, the girl took part in 16 performances of the youth theater including the shows “The Princess and the Pea,” “Alice in Wonderland,” “The Little Mermaid,” “Titanic,” and others.

At 15, Emma Stone created a computer photo presentation entitled “Hollywood Project,” showed it to her parents, and persuaded Jeff and Kristina that acting career was much more important for her than the standard education. The parents allowed the daughter to quit school and even agreed to move to Los Angeles with Emma where she would go to auditions.

In 2004, Emma and Kristina went to the American movie capital where the young actress almost immediately started working on the staged reality show “The Partridge Family.” The show was not much popular, but the beginning actress was noticed and offered the work on series. In the next three years, Emma took small roles in the series “Medium,” “The Suite Life of Zack & Cody,” “Malcolm in the Middle,” “Lucky Louie,” and “Drive.”

Emma Stone debuted on the big screen in 2007 in the teen comedy “Superbad” where she played a secondary role of the girl Jules. Next year, the actress got the role of a bass guitar player Amelia in the musical comedy “The Rocker” and played a more significant character – the president of the women’s club Natalie in the teen comedy “The House Bunny.”

In 2009, Emma worked on three movies: the melodramatic comedy “Ghosts of Girlfriends Past,” the comedy melodrama “Paper Man,” and the black comedy “Zombieland.” Emma Stone’s roles were secondary, but the latter movie brought her some popularity.

This fact gave the young actress the chance to receive the leading part in a new musical comedy “Easy A.” The image of Olive Penderghast was so successful that Stone was nominated for the Golden Globe Award.

Next year, the romantic comedy “Friends with Benefits” followed. In “Crazy, Stupid, Love,” Emma played the main character’s daughter. At that period, the actress also played the first serious role of the journalist Skeeter Phelan in the drama “The Help” based on Kathryn Stockett’s novel.

The 2012 movie “The Amazing Spider-Man” where she starred with Andrew Garfield increased the actress’s popularity. Emma played Gwen Stacy, the girl the popular American superhero is in love with. The box office of the comics adaptation was good, although the critic responses were just calm. In 2014, the movie sequel “The Amazing Spider-Man 2: Rise of Electro” came out.

Apart from these action movies, Emma Stone played in the crime thriller “Gangster Squad,” the black comedy “Birdman,” the comedy “Magic in the Moonlight” with Colin Firth, and the romantic tragicomedy “Aloha” with Bradley Cooper.

In 2017, Emma Stone won the prestigious Academy Award for Best Actress for her main role in the 2016 movie “La La Land.” The movie was nominated for the recording awards but failed to become the best one – the movie “Moonlight” did. “La La Land” received six Academic Awards altogether.

“La La Land” is the musical comedy and drama that tells the touching story of two creative persons. The movie gained numerous positive reviews of professional movie critics as well as ordinary viewers who shared their impressions on various Internet platforms.

Critics believed that “La La Land” became the second wind in the genre of the musical movies. Emma Stone’s acting was called the substantial reason for watching the movie.

The movie received 92% of public support on the popular website Rotten Tomatoes. Similar percentages are registered on other similar web-sources. The musical became one of the top-grossing movies of the year.

Although viewers are used to seeing Emma’s red hair, she is a natural blonde. At the beginning of her career, she had to have her hair dyed in black for TV movies shooting. The producer of the comedy “Superbad” Judd Apatow insisted on red hair. The actress liked this image so much that she decided to keep it.

In 2008, Emma met the actor and musician Teddy Geiger at “The Rocker” movie set; they were dating for about a year.

In 2010, the actress had a love affair with the famous actor Andrew Garfield; later, they would star in the Spider-Man movies together. The young people were together for five years and even planned the wedding in summer 2015. However, they split up several months before that.

In 2017, the media rumors had it that the actress was seeing Dave McCary, the 32-year-old director and scriptwriter of the popular TV show “Saturday Night Live.” Journalists guessed that the actress had met McCary when she took part in the show at the end of 2016.

Emma and her new boyfriend appeared together in May 2017: for the first time, the lovers came to the SNL afterparty where paparazzi found them kissing.

In 2017, the reputable magazine “Forbes” placed Emma Stone first in the list of the highest-paid actresses in the world. Her annual earning was $26 million.

In 2017, Stone played in one movie only: the sports movie “Battle of the Sexes” became the work of the year. The movie was based on real sportspersons’ biographies and the famous tennis match between Bobby Riggs and Billie Jean King.

Emma Stone played the professional sportsperson Billie Jean King, number two tennis player in the world and the leader of the equal medal place movement. The Wimbledon winner Bobby Rigs played by Steve Carell was laughing at the movement demands and believed that female sport was worse than male sport a priori. To prove himself right, Riggs challenged Billy Jean; the upcoming tennis battle was widely advertised by media as the “battle of the sexes.”

In 2018, Emma will appear in the series “Maniac” and the biographical drama “The Favorite.” 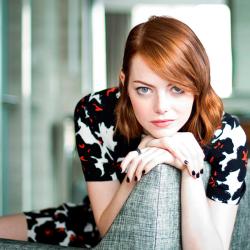