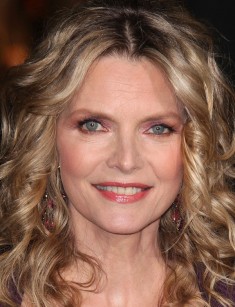 Michelle Pfeiffer is a famous American actress who became famous after the crime drama "Scarface" had been released. Michelle gained world popularity due to such pictures as "Dangerous Liaisons", "Frankie and Johnny" and "The Batman Returns".

Michelle was born in Santa Ana, California where her parents had moved from North Dakota. Her father Richard Pfeiffer was involved in the delivery of household appliances, and her mother Donna Taverna was a housewife. Michelle has a brother Rick who is 3 years older than she and two younger sisters Dedee and Laurie who also became actresses.

The family of Pfeiffer changed their residence for several times. From Santa Ana, they moved to Midway City and then settled in a cozy town of Fountain Valley. There Michelle attended comprehensive school and later, in 1976 she entered the Golden-West College in Huntington Beach, and alongside with this, she worked partly as a cashier at the supermarket. She had studied at the college for 2 years, specializing in Law as when matriculating to higher education she planned to become a court stenographer. But, when she had got a degree, Michelle Pfeiffer decided to begin acting career.

In 1978 Michelle became the winner of the Miss Orange County beauty pageant what enabled her to take part in Miss California contest where she took the 6th place. Having considered these achievements quite successful the girl employed herself a personal agent and started to do the auditions and castings in Los Angeles.

The actress began her creative career step by step, there was no sudden take-off. First movie roles of Michelle Pfeiffer were rather small. She took part in commercials, several TV movies, and little-known pictures. According to the actress, at the beginning of the career, all the directors tried to use only Michelle’s appearance. Then she began to take acting lessons at Beverly Hills Playhouse school to work on the body mobility and scenic speech.

The result wasn’t long in coming. In 1983 the crime drama "Scarface" where the actress played together with a legendary star Al Pacino was released. Film critics rigidly criticized this movie for a large number of violent scenes, but the picture was commercially successful and at the present time it is considered one of the best gangster movies in the movie history.

The screen adaptation of the sensational novel written by John Updike "The Witches of Eastwick" became the next significant movie hit with Michelle Pfeiffer's participation. It’s amusing that after the private screening of the movie, having seen discontent of the audience with the final, the director shot a couple of alternative endings of the picture. As a result "The Witches of Eastwick" became one of the highest grossing pictures of 1987.

In the musical melodrama "The Fabulous Baker Boys" the actress got the role of the carefree call girl Susie Diamond who discovers that she a talent for singing. Michelle not only managed to embody the screen character of the girl who transforms from the

Lady of the night into the stage star but also performed songs in this movie on her own.

By 1992 Michelle Pfeiffer was already a popular actress. But after the movie "The Batman Returns" in which Michelle played a role of the Catwoman Selina Kyle Michelle became world famous. To present a character of the super-hero in a great way, Michelle especially took martial arts' course and went in for kickboxing. With the help of the specialists, she got into the habits and movements of the predators from the cat family. Critics unanimously called the image of Selina Kyle performed by Michelle Pfeiffer the best representation of this character in the history of cinematography. The picture had huge grosses and had earned over 266 million dollars.

At the beginning of the 21st century, the actress took a break in her work for several years. In 2007 Michelle returned to the movie industry by acting in the musical movie "Hairspray" which was directed by the well-known Broadway musical. Pfeiffer played the character of Velma von Tussle – a wicked headmistress of the TV channel.

The same year a fantasy comedy "Stardust" came on the screens and became popular very soon. In this picture, Pfeiffer took the part of the malicious ancient witch Lamia.

Also in 2007, the actress played a leading role in the comedy melodrama "I Could Never Be Your Woman" in which Michelle Pfeiffer appeared as a character of the single mother who was mutually in love with the young actor. The main problem for the woman is the fact that her beloved man is ten years younger than she.

In 2008 the actress played the major female role in the drama "Personal Effects" based on the story by Rick Moody "Mansion on the Hill".

In 2009 Michelle Pfeiffer played the role of Lea de Lonval in the German-British melodrama "Chéri". The romantic drama shows Paris of the 20-s and tells a life story of the young son of the courtesan who is making his way to the high society.

In 2011 the actress performed the leading role of the introverted woman Ingrid in the romantic comedy "New Year’s Eve". The plot of the comedy is divided into fragments and independent storylines which characters are intersected and unexpectedly become connected.

In 2013 the actress appeared in the leading role in the crime comedy "The Family", the screen adaptation of the novel written by Tonino Benacquista. Pfeiffer played a role of the wife and mother of the family with the appearance of which strange and criminal incidents have begun in a quiet town. Robert De Niro played the head of the family - the writer Blake. After a while, the inhabitants of the town understand that a seemingly successful family with two children and a dog turns out to be a family of the mafia boss who hides from the U.S. authorities’ prosecution.

In general Michelle Pfeiffer took part in more than 50 movies, and it is known that the actress refused leading roles in such famous pictures as "Pretty Woman", "Evita", "Basic Instinct" and "The Chronicles of Narnia: The Lion, the Witch, and the Wardrobe".

During her studies at acting courses in Beverly Hills, Michelle Pfeiffer got acquainted with the actor Peter Horton. In 1981 they got married and they had been together couple for 7 years. They divorced because Peter blamed his spouse for the fact that she had been more concentrated on her work than on her family.

After Michelle had broken up with Horton she was meeting during three years with the actor and the director Fisher Stevens whom she met at New York Shakespeare Festival. Also, the actress had love affairs with John Malkovich, her partner in the movie "Dangerous Liaisons", and with the actor Michael Keaton.

In 1993 the actress married again. The scriptwriter David Edward Kelley became the second husband of Michelle Pfeiffer. They first met on a blind date. In 10 months they became husband and wife.

Before the acquaintance with David, Michelle filed an application for the adoption of the child. In March the actress adopted the girl Claudia Rosa. In 1994 Michelle and her spouse became parents of their son, Michelle gave birth to the boy John-Henry. Her new family became more important than her career, therefore, Michelle had twice taken breaks for several years.

In the nineties, Michelle Pfeiffer was many times called the most beautiful Hollywood actress and also was included in the list of "50 most attractive women of the planet" according to the "People" magazine.

The actress is involved in charity work and supporting Association against cancer. Pfeiffer was especially touched by this issue when her niece got sick with leukemia. After more than 10 years of smoking addiction, Michelle gave up smoking and also stopped eating meat products and became vegetarian.

Every year admirers are more and more interested in the question whether the actress had plastic surgeries. The web- critics collect selections of the photos of the appearance "Plastic surgery: before and after", convincing the public that he sharp nose and young skin – is a result of the doctor’s work. Michelle claims that she didn't avail herself of the plastic surgeons. According to the actress, her shape of the nose is natural, and slow aging is not a merit of a plastic surgeon, but of her dermatologist whom the actress regularly consults.

Besides, the actress keeps slim (Michelle is 170 cm high and weighs 57 kilos ) that also positively influences her health and appearance. In one of her interviews, Pfeiffer confessed that during present days she bothered about her appearance less than years ago. By the words of Michelle, as time unfolds the public pressure upon the appearance of the actresses weakens what allows them to depart from the tough standards.

Michelle Pfeiffer doesn't have an account on "Instagram", but since 2011 the photos of the actress appear on this platform by the efforts of the official fan-site of Michelle.

In 2016 the actress took part in the festival movie. In January of 2017 the drama "Where is Kyra?" was premiered at Sundance Movie Festival. In this picture, Michelle performed a leading role of a secretive woman Kyra who starts cheating no to be moved out from the apartment.

In May of 2017, Michelle Pfeiffer appeared in the biographic drama "The Wizard of Lies". This movie is a screen adaptation of the book written by Diana Henriques, which told about the life of the businessman Bernard Madoff and the creation of the Ponzi scheme. The businessman invented the criminal scheme which allowed to create the world's largest financial pyramid disguised as an investment fund. The actress played the part of Ruth Madoff.

The actress appeared in the detective thriller "mother!" on the 12th of October, 2017. Also, in November of 2017, Michelle Pfeiffer appeared on the screens as Mrs. Hubbard in the detective story "Murder on the Orient Express", the screen adaptation of the same name novel by Agatha Christie about adventures of the famous detective Hercule Poirot.

At present time the actress is involved in shootings of the tragicomedy "Man Under". The picture shows the life of a dysfunctional family which members became famous overnight after the art gallery hung out the photos with them.