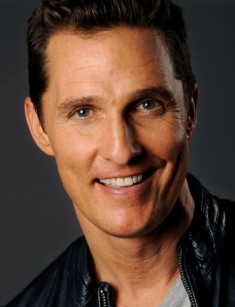 Matthew McConaughey is an American actor. McConaughey gained popularity as a comedian, but later showed a dramatic flair in the films The Lincoln Lawyer, Mud, Killer Joe and Interstellar, thus, the actor got prestigious film awards. In addition, McConaughey tried his hand as a screenwriter, filmmaker, and producer.

The third son, Matthew, was born on November 4, 1969, in the family of a kindergarten teacher and the owner of the gas station. His parents hardly knew that an ordinary boy from Texas would become a famous actor, the Oscar, and Golden Globe Winner.

Matthew McConaughey dreamed of a lawyer career at the school. Classmates adored him. They did not offend and harass a nice boy, therefore, he went to school with pleasure.

Both his brothers joined the family business after graduation. They helped their father at the gas station. But such work did not attract Matthew. Instead of working at a gas station, he went to Australia for a year, where he acquired a strong accent and could not get rid of it for a long time.

By the time he returned to Texas, the guy knew for sure that he would become an actor. McConaughey strengthened acting skills at the University of Texas. He made his living by shooting in commercials.

The creative biography of McConaughey began with a chance encounter. In his student years, Matthew met Don Phillips. Don offered him a role in the movie Dazed and Confused, the shooting of which was about to begin. McConaughey gladly agreed. The producer and director were so impressed with the student's talent that they decided to expand the episodic role of David Wooderson. The premiere of the movie took place in 1993 and received the acclaim of critics.

In 1993, the film My Boyfriend’s Back with Matthew McConaughey was released. The following year, the actor starred in the youth horror film Texas Chainsaw Massacre: The Next Generation.

While studying at the university, Matthew starred in the films Judgement, Angels in the Outfield and Boys on the Side. That period did not bring him outstanding roles, that could make the movie stars talk about him.

After graduation, McConaughey moved to Los Angeles. In 1996, fate was on the side of the talented actor because he played the lead role in the movie A Time to Kill, and he won the MTV Movie Awards for it. Matthew attracted the attention of filmmakers after the release of the film. The same year, the actor starred in four films. His popularity grew with each new role.

In 1998, The Rebel, Making Sandwiches, The Newton Boys were released. A year later, EDtv, U-571 and The Wedding Planner appeared too.

Matthew McConaughey worked without rest. The film How to Lose a Guy in 10 Days, where he played with Kate Hudson, was a stunning success. The movie Sahara with Penelope Cruz was no less popular. In 2008-2012, viewers steadily saw Matt in two or three new films a year.

The role of Ron Woodruff in the movie The Dallas Buyers Club became a significant point in the life of the actor. He won the Oscar and the Golden Globe. Matt managed to show the strength of his hero’s character, an HIV-infected electrician who did not accept his fate and managed to prolong his life with untraditional treatment.

The actor lost weight for the role. Matthew looked like two different people before and after the shooting because McConaughey lost 22 kg and began to look like a seriously ill person. Shortly after the release, McConaughey could return to his normal weight and subsequently weighed 79 kg with a height of 183 cm.

The series True Detective with Matthew McConaughey in the lead role was released on January 12, 2014. The main roles in the detective series were also played by Woody Harrelson and Michelle Monaghan. The series begins with a mysterious murder, and the main characters of the detective are forced to investigate it.

The TV ratings of the series were higher than the ratings of Game of Thrones. In April of the same year, the authoritative Time magazine included the actor in the TOP-100 of the most influential people. In addition, screenshots with Matthew McConaughey spread across the Internet as memes.

Matthew McConaughey played a major role in the science fiction film Interstellar of Christopher Nolan on October 26, 2014. McConaughey appeared in the image of an astronaut and researcher, whose crew went through the discovered space-time tunnel in order to be on the other end of the universe.

Critics have found drawbacks in the plot and scientific data in the blockbuster. Nevertheless, fans have recognized Interstellar as one of the most reliable science-fiction box-office films of recent years. The directors invited some famous scientists to the camera crew to advise on controversial issues of the cinematographic universe.

The star of McConaughey appeared on November 17, 2014, on the Hollywood Walk of Fame.

Matthew is a heartbreaker. His numerous love affairs constantly became a newsworthy information for journalists. In 1994, he had a romantic relationship with actress Patricia Arquette. In 1996, Matthew got romantic with Ashley Judd. He met her on the set of A Time to Kill.

The actor dated with Sandra Bullock for almost two years. When they broke up, Matthew did not have new love affairs for a long time. But he could not resist sexy Penelope Cruz. Their relationship lasted for two years, but also ended in a breakup.

He met his future wife in one of the restaurants in Los Angeles. Matthew McConaughey saw Camila Alves at a banquet in her honor and immediately fell in love. The girl also loved him. The couple had a son Levi in the summer of 2008, a year and a half after the beginning of the relationship. A year and a half later, Camila gave birth to the daughter, Vida. However, two children could not force the actor to marry.

The actor made a marriage proposal only when Alves was pregnant for the third time. In the summer of 2012, the couple exchanged rings in the estate in Texas. The third son was called Livingston.

Nowadays, Matthew McConaughey is absolutely happy. He has a family, a home, his own production company, the charitable foundation. The actor firmly follows his motto, which says: "Just keep living".

McConaughey does not have an official account on Instagram. There is no verified actor profile there, as well as no account similar to the real one or McConaughey’s fan page according to the number of subscribers and personal photos of the actor.

In June 2016, McConaughey played a major role in the drama The Free State of Jones. The film tells about the civil war in the US and focuses on a group of deserters from the Confederate States Army. The deserters settled in Jones County, where they advocated the abolition of slavery, and the resistance leader, whose role was performed by McConaughey, even married a former slave, creating a precedent in the region without mixed marriages.

In January 2017, McConaughey played in the drama Gold. The film was based on true story and told about the fraud of the Bre-X company in 1993-1997. The speculator, whose roles were played by Matthew McConaughey and Edgar Ramirez, faked the results of gold discovery, forcing the company, politicians, and stock exchange players to invest in a non-existent business.

On July 28, 2017, the premiere of a fantastic film The Dark Tower is planned. The film is based on the series of novels under the same name by Stephen King. The film is positioned as a mixture of fantasy, horror, science fiction and western. Matthew McConaughey played the role of Walter Padick in the film. 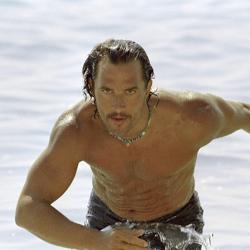