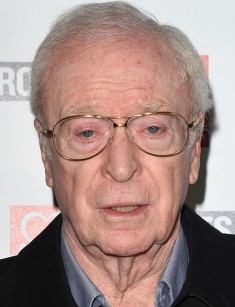 Michael Caine is one of the most popular and demanded actors of the 60-90-s. Now the filmography of this eminent British actor is estimated in hundreds of movies, and he has two prizes of Academic Awards and three Golden Globes in his asset of prizes.

Maurice Joseph Micklewhite (the name given to the actor at the birth) was born in the slums of London on the 14th of March, 1933.

The mother of the future actor worked as a cleaner, and his father was a porter. At school Maurice wasn't a diligent pupil, he often skipped the lessons, preferring to getting knowledge - viewing of the movies at the local movie theater. Basketball was the only reason for which the actor went to school. It is known, that during the teenage years the master of transformations played for school basketball team and even took part in the competitions for a couple of times.

At the age of 16 Caine, in spite of the bans of the head of his family, left the school and went to serve under the contract in the British Expeditionary Unit in Korea. When Michael came back to his hometown he managed to try himself in different fields of activity. The actor worked as a dishwasher at the restaurant, and as a barker in the bar, and also as a porter at the warehouse. Then the hardworking guy had got a job of the assistant administrator in the theater.

Having been inspired by the atmosphere which reigned in the theater, Caine signed up for the acting courses which he finished in 1955. After that, for a few years, the actor performed as a part of provincial theatrical companies on the boards of various theaters and even participated in the TV plays. At the beginning of his creative career, the actor had chosen and taken himself a pseudonym of Michael Scott which he soon changed to Michael Caine.

There are two versions of how Maurice Joseph Micklewhite had become Michael Caine. The version in which it is said that the actor called himself in such a way in honor of the movie "Citizen Kane" - is wrong. In fact, during the telephone conversation with the agent the actor saw the poster of the military drama "The Caine Mutiny" and after seeing it this pseudonym appeared in his imagination.

The feature film by the director Cy Endfield "Zulu" which came out in 1964 became the debut film for Caine. In this picture, which plot was based on the real historical event (the Battle of Rorke's Drift) Michael transformed into the character of the lieutenant Gonville Bromhead.

In a year the actor received the leading role in the espionage detective "The Ipcress File". It should be noted that Caine was recommended to the director Sidney J. Furie by Sean Connery. In this picture, the actor tried on himself the image of the sergeant Harry Palmer, the ladies’ man and a thunderstorm of the international crime, who later became a prototype for the creation of the character by the name of Austin Powers.

In 1966 the picture "Alfie" was released, which brought to Michael Caine his first nomination for Academic Awards in his life. The actor played the polygamous man Alfred Elkins in this film. The same year Caine acted in the American comedy movie "Gambit" in which the actor appeared before the audience as the elegant robber Harry Dean.

In 1971the master of the embodiments had shown to the viewers the versatility of his creative nature, having played in the detective drama "Get Carter" directed by Mike Hodges, shot by the novel written by Ted Lewis. Michael played the leading role in this movie – the character of the gangster Jack Carter.

In the tragicomedy "Sleuth" which was released a year later, Caine acted together with Laurence Olivier, and 35 years later Jude Law became the workmate of the actor in the remake of the movie "Sleuth", which also came out under the title of "Sleuth".

The movies in which the eminent actor played since the second half of the 70-s, caused negative responses from critics and these pictures failed in a hire one after another. During this period movie, fans accused Michael of illegibility at the choice of characters after each new role. It’s worth noting the image of Dr. Frank Bryant in the movie "Educating Rita", which was among the successful works of the actor in the 80-s. In this picture, a well-known actress Julie Walters became actor's partner on the shooting stage.

In 1986 there was released the movie directed by Woody Allen in "Hannah and Her Sisters" in which Caine had got a supporting role of Elliot - the husband of the main character. In 1988 the actor replenished his trophies with the prize of the Golden Globe Awards. He received this prize for the role in the adventurous comedy "Dirty Rotten Scoundrels" in which Steve Martin became his partner on the movie set. The same year the actor acted in the series "Jack the Ripper".

In 1992 the eminent actor enriched his filmography with the pictures " The Muppet Christmas Carol", "Blue Ice" and "Noises Off…". In the late nineties Caine played in the movies "Little Voice" and "The Cider House Rules", the roles in which brought the prizes of Academic Awards and Golden Globe Awards to the actor.

The year 2000 was marked by the release of the movie "Miss Congeniality" with the actress Sandra Bullock in the leading role. In this picture narrating about the employee of FBI who by a whim of fate became an undercover agent at the annual prestigious competition "Ms. United States" the actor turned into the character of the stylist Victor Melling. Two years later the admirers saw their favorite actor in the movies "Austin Powers in Goldmember" and "The Quiet American".

In 2005 there came out the superheroic fighter "Batman Begins" based on the DC Comics directed by Christopher Nolan. In this movie where the leading role was played by the actor Christian Bale, Caine embodied the character of the Batman's butler - Alfred Pennyworth. Michael also appeared in two sequels of the trilogy: "The Dark Knight" (2008) and "The Dark Knight Rises" (2012).

The year 2010 was signed by the release of the science-fiction thriller "Inception" based on the idea of conscious dreams. Such stars as Leonardo DiCaprio, Ellen Page, and Joseph Gordon-Levitt took part in this movie together with Michael Caine.

In 2013 there were premiered the detective thriller "Now You See Me" and the picture "Mr. Morgan’s Last Love" which was shot by the same name book of the scriptwriter and writer Françoise Dorner.

During the period from 2014 to 2016, the actor added to his filmography the roles in the following pictures - "Kingsman: The Secret Service", "Stonehearst Asylum", "Interstellar", "Now You See Me 2" and "The Last Witch Hunter".

For the first time, the actor married in 1955. Then the actress Patricia Haines became his darling. In this marriage which had lasted for 7 years, their daughter Dominique was born. In 1973 Michael officially registered his relations with the model Shakira Baksh. It is known, that in 2017 the marriage of Shakira and Caine is still strong and unbreakable. The spouses live in perfect harmony and bring up their joint daughter Natasha.

In 2000 Caine was knighted by Queen Elizabeth II, and since then it is obligatory to add "Sir" to the name of the actor while addressing him.

In April of 2017, there was held the world premiere of the American comedy of Zach Braff "Going in Style" (a remake of the movie "Going in Style" of 1979). This picture tells a story about three retired men, who, despite their solid age, haven't lost the youthful speed. At the end of their life, having strayed from the path of righteousness decided to rob the bank. Caine along with the actors - Morgan Freeman and Alan Arkin received the leading role in this picture.

Also in 2017, the military drama "Dunkirk" directed by Christopher Nolan came on the big screen. In the movie, it is told about the rescue of hundreds of thousands of English, Belgian and French soldiers during the Dunkirk operation which took place at the beginning of the World War II. It is known that Michael hadn't appeared in the shot, but his voice was used when voicing the broadcast message.

Moreover, the actor is involved in the work on the movies "Four Kids and It" and also "Harry and the Butler". There is still no information concerning the plots and the release dates of these masterpieces on the big screens.

It is authentically known that Caine has an account on Twitter. Also, fans of the actor can easily find the materials (interviews, photos from the shootings) connected with the creative biography of the Hollywood star both on various web sources and in printing editions. 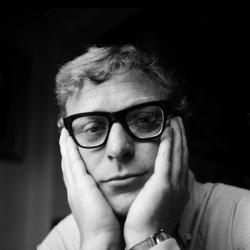