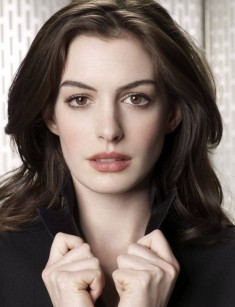 Anne Hathaway is a Hollywood actress and Academic Award winner. The audience remembers her as the symbol of originality and love of freedom. The majority of the actress’s characters, from the young successor to the throne in “Princess Diaries” to the professional journalist in “The Devil Wears Prada,” had to choose between obeying the external circumstances or standing for their preferences and rules. Hathaway did not limit herself to the touching nonconformist figure: she also played historical and lyrical characters, witches, queens, and thieves.

The American actress and singer Anne Jacqueline Hathaway inherited her bright, unusual appearance from her Irish ancestors; she was named after William Shakespeare’s wife – her name was also Anne Hathaway. The future Hollywood star’s father Gerald Hathaway served as a lawyer; the mother Kate McCauley worked at the theater and fostered the daughter’s love of art since the early age. The girl’s education was based on the Montessori method created by the famous Italian educator: a child’s own abilities are developed without imposing knowledge.

When Anne was born, her family lived in New York; they moved to Melbourne, New Jersey, when the girl was 6. Ann grew up there, took up vocal classes, fought with her brothers Michael and Thomas, and finished the high school. She entered the Vassar College of the New York University to study English Literature. The future actress sang in a choir in her spare time and performed on the most prestigious stage of the world, Carnegie Hall.

The mother of little Anne dreamed about the acting career more than the girl herself: when a kid, the future Hollywood star wanted to devote her life to serving God. The Hathaways were very religious people; they would go to the Catholic church with children to celebrate holidays. Small Anne was so impressed by the fascinating church atmosphere that she decided to stay there forever and become a nun. However, the future actress realized at school that art was her personal temple.

Anne Hathaway appeared on the professional theater stage at 10 – it happened with the mother’s assistance. The girl sang in a musical play based on Charlotte Bronte’s novel “Jane Eyre.”

Inspired by her acting success, Anne decided not to squander her talents on trifles and went to sing in Broadway musicals. The talented young woman with a beautiful voice was not accepted because of her appearance: she was too tall to play child characters while her face was too childish to play adults. The failure was difficult for Anne: she thought she was ugly and had no chance to succeed on the stage so she should forget about acting forever.

Fortunately, the bad luck did not break down one of the most beautiful Hollywood actresses and make her reject the movie actress career. As Anne Hathaway recovered from the defeat, she restarted acting and went to the symbolically-entitled series “Get Real” auditions. She was accepted. The audience did not like the series very much, and the multi-series project was soon taken off the schedule because of low ratings. Still, Anne’s acting talent was noticed by critics and directors.

Soon after her debut, the young actress came to a fairy tale: the famous American movie director Garry Marshall who created the famous melodramas “Pretty Woman” and “Runaway Bride” offered Anne Hathaway the leading part in the Disney movie “Princess Diaries.” The master saw Julia Roberts, Audrey Hepburn, and Judy Garland in the yesterday’s school girl – Marshall compared the then-unknown Anne Hathaway with these stars, and he was right. After “Princess Diaries,” the beginning actress became popular.

In 2005, Anne Hathaway played the secondary role in “Brokeback Mountain” that won three Academic Awards. The actress performed the cowboy’s wife whose family life was ruined by her husband’s gay love. Heath Ledger and Jake Gyllenhaal played the leading parts in this movie.

In 2008, Anne played the main role of a psychiatrist who helped air crash victims in the thriller “Passengers.”

In 2011, the actress demonstrated that she looked authentic not only in mysterious and drama projects but also movies showing ordinary life. Anne played the leading part in the American-British melodrama “One Day.”

In 2012, Hathaway starred in the dark screen version of Batman comics. The actress played the enigmatic thief Selina Kyle, the Catwoman and the classic character of ВС Universe, in the third movie of Noland’s trilogy “The Dark Knight Rises.”

The actress’s acting was fascinating in any movie, whether it was the crime drama “Crazy” or the romantic tragicomedy “Love & Other Drugs” that makes cry almost all lovers. In the latter movie, Anne collaborated with Jake Gyllenhaal once again. The movie contains abundant sex scenes, yet it remains a touching story of the terminally ill girl. Anne an Jake supported the movie by the naked photo session for the magazine “Entertainment Weekly.”

The actress received the professional recognition after the musical “Les Misérables.” For this project, the beauty sacrificed her wonderful hair and had it cut. However, she never regretted it. Anne Hathaway got BAFTA, the Golden Globe Award, and, finally, the Academy Award for the role of Fantine.

The fantastic movie “Interstellar” by the famous movie director Christopher Nolan was a smashing hit. Matthew McConaughey was Hathaway’s partner in this work.

Anne Hathaway had her first serious relationship with the successful real estate businessman Raffaello Follieri. Everything ended with a huge scandal: Follieri was accused of stealing $50 million from the Catholic church fund that the actress founded. Anne Hathaway was a witness in the case; her diaries became a circumstantial evidence. The breakup accompanied by the criminal proceedings was difficult for the actress; she refused to give interviews and hid from paparazzi.

In 2010, the actress was said to have a love affair with her colleague Jake Gyllenhaal: the actors starred in a project together, and their fans hoped that there was some chemistry between Anne and Jake. However, the actors denied these rumors: Gyllenhaal was dating Taylor Swift, and Hathaway was still going through her breakup.

When Anne Hathaway’s moral wound’s healed, the actress was getting courted by her colleague Adam Shulman. The actor and jewelry designer tried to achieving Hollywood star’s hand and heart. In 2011, the couple announced their engagement. On September 29, 2012, Adam Shulman and Anne Hathaway married in a small California town Big Sur; only relatives and close friends were invited to the ceremony. Yifat Oren called by Hollywood stars “a kind fairy” organized the event. She created the atmosphere on wedding ceremonies of many Hollywood stars: Cameron Diaz, Reese Witherspoon, and others.

Anne Hathaway does not like journalists and social events. She enjoys walking with her dog Esmeralda; the actress tries to spend her spare time with her husband and family.

Anne is a vegetarian; she likes broccoli. The actress does not diet herself – she just prefers healthy meals and training. With her 173 cm. height, she weighs 53 kg. Ill-wishers claim her body is too thin and recommend her to gain more weight. In her turn, Anne states that her body is not subject to fashion: she feels comfortable with this weight, and she just takes care of her health without trying to slim down.

In 2016, Anne Hathaway starred in “Alice in Wonderland” sequel, “Alice Through the Looking Glass,” and played White Queen.

In the same year, the Canadian-Spanish project “Colossal” starring Hathaway came out. The movie combined action, comedy, and sci-fi genres.

In 2018, the premiere of the movie “Ocean's 8” with Hathaway is scheduled. Anne played one of the leading parts – Ocean’s friend in the company of the eight. Critics and viewers have been discussing the movie. The project is notable for the star cast: the main roles are played by Sandra Bullock, Cate Blanchett, Helena Bonham Carter, and Rihanna. Critics have two weird complaints about the movie whose plot is still unknown: it is another remake and women took the leading parts. 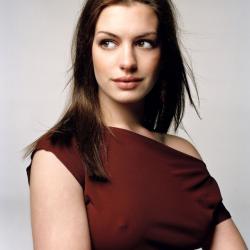