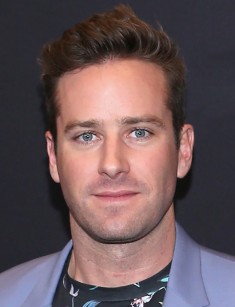 Armie Hammer is an American actor who is known to the audience due to his roles in the movies The Social Network, The Man from U.N.C.L.E. and Mirror Mirror. Hammer is the representative of American "preppy," but at the same time, he isn't spoiled by money. He honors family traditions, and he feels proud of his Russian roots.

Armand Douglas Hammer was born on the 28th of August of 1986 in Los Angeles. His father Michael Armand Hammer is a financial tycoon; he is an owner of Knoedler Publishing publishing house and Armand Hammer Productions film company. It's surprising, but his mother Dru Ann came from the ordinary family and worked as an employee in the bank. Armand has a younger brother called Victor.

Armie Hammer has Russian roots what he repeatedly mentioned in the interviews. He is proud of his ancestors and background.

His great-grandfather Armand Hammer was a well-known businessman, he was the owner of Occidental Petroleum oil company. He had Jewish roots; he was born in the family of Jewish emigrants from the Russian Empire. Even though he was living in the USA, he was successful in business in Russia as well. The great-grandfather found the first plant of the writing things in the USSR and began the construction of World Trade Center in Moscow.

In his assets, he has many awards, prizes, and orders. He was even nominated for the Nobel Prize. By the way, the boy received his name in honor of his legendary great-grandfather. His wife - Armie's great-grandmother is a Russian actress and singer Olga Vadina.

In such a way, the future actor was brought up in a rich and intelligent family. When the boy turned seven, all his family relocated to the Cayman Islands. Here the boy studied in Faulkner's Academy and regularly went to Christian school. They have lived here far from "civilization" for five years, and when the boy returned to Los Angeles, the boy told about his wish to become an actor.

Armie began to have this desire, not by chance. Once he saw the picture Home Alone and then all night long, he saw the dreams that he was on the place of Macaulay Culkin. He thought that he could cope with unlucky robbers not worse, than the leading character. In the morning he announced to his parents about his desire to become the actor. Though until this day he was planning to follow in the footsteps of his father and to become a businessman.

Already at school he together with friends organized some business – the children stole Playboy magazines from the adults and sold in the set with the hand lotion. Soon the director learned about it and then opened the personal locker of Armie where he found tens of lotion bottles. The boy answered that he just had very dry skin on his hands.

Armie’s first roles were episodes in the series Arrested Development, Desperate Housewives, Veronica Mars, and others.

In the youth series Gossip Girl the young actor has received the more remarkable role, he appeared in three episodes of the series. What about the first leading role, Armie received it in 2008 in the picture Billy: The Early Years. He performed the role of Baptist Billy Graham - a spiritual mentor of the U.S. presidents.

The actor became popular after the picture The Social Network directed by David Fincher. Armie was lucky to play in this movie two characters at the same time – twins Cameron and Tyler Winklevoss. This movie was nominated for 8 Academic Awards and 6 Golden Globe Awards. As a result, this picture received 3 Academic Awards and 4 Golden Globe Awards.

The picture J. Edgar directed by Clint Eastwood became the actor's next movie. The actor worked together with Leonardo DiCaprio on the movie set.

The role of Prince in the movie Mirror, Mirror became one more bright role of the actor. Armie has turned into the real prince – blue-eyed, with a height of 196 cm. Lily Collins has performed the role of Snow White, and Julia Roberts played the angry Queen. It was a great experience for the actor.

For the next time, the actor appeared in the duet with Johnny Depp in the movie Lone Ranger. Hammer played the character of the officer of the law. His character wears a black mask which suspiciously looks similar to Zorro's mask. Even though the comedy western turned out to be funny and was even nominated for two Academic Awards, it received Golden Raspberry Awards as Worst Sequel, Remake or Rip-Off.

In 2015 the movie The Man from U.N.C.L.E directed by Guy Ritchie was released. Hammer received one of the leading roles – the KGB agent Illya Kuryakin. The actor of the "Superman" Henry Cavill became his partner on the movie set. After the appearance in this movie, the actor was showered with the offers of the roles.

In 2016 there came out four feature movies with the participation of the actor – The Birth of a Nation, Nocturnal Animals, Free Fire, Mine.

In 2017 Armie Hammer voiced-over the character in the animated series Cars 3 and got the major role in the movie Final Portrait. But the picture Call Me by my Name directed by Luca Guadagnino became the most remarkable project of 2017 for the actor.

In 2008 the actor met the TV host and journalist Elizabeth Chambers. By the words of Armie, he fell in love at first sight. During two years he was courting Elizabeth. They got married on the 22nd of October of 2010. To prove his love Hammer had made a tattoo on his ring finger with the initials of his wife.

By the way, it's not the first tattoo of the actor. On his wrist, the man has a phrase in Cyrillic – Hammer. He has made to pay tribute to his Slavic background. Each man in their family has such a tattoo; they make it when they reach the age of majority. At the same time with this event, the man receives the watch to hide the tattoo. This is a tradition in Hammer’s life.

Elizabeth is four years older than Armie Hammer for four years. Though, this fact doesn't influence their relationship in any way. Armie does not keep it in a secret that he adores his wife. They look good together. As it is said, they are a perfect match.

On the 1st of December of 2014, Armie and Elizabeth became parents. Elizabeth gave birth to their daughter called Harper Grace Hammer. And in the summer of 2016, the couple attended the Toronto Film Festival where everybody could notice Elizabeth's rounded tummy. On the 15th of January of 2017, Elizabeth gave birth to their son Ford Douglas Armand Hammer. The spouses often publish the photos of their children on Instagram and don't hide their faces.

Moreover, the actor regularly writes posts on Twitter. By the way, in 2017 he disappeared from the social network for two months. It happened after the scandalous the publication of Buzz Feed under the title "Ten Long Years of Attempts to Make a Star of Armie Hammer."

The author of the article was wondering why Hammer continued to take part in the movies even though the pictures with his participation weren't very successful in the hire. Armie read the content of the article and even retweeted it, but soon he decided to delete his account. However, in January, of 2018 he appeared on Twitter again.

The picture of the young scientist Oliver in the movie Call Me by my Name has become the most scandalous role in Armie Hammer's movie career. The film was premiered in the world hire on the 22nd of January of 2017 at Sundance Film Festival. This movie was nominated for 4 Academic Awards.

The plot of the movie takes place in 1983. The seventeen-year-old Elio Perlman whose character was performed by Timothée Chalamet lives in Italy with his parents. The young scientist who is an assistant of Elio's mother comes to them to stay at their house. They began to have romantic relations, but they aren't destined to be together. The actor himself shared in the interview with British GQ that it was difficult for him to play the gay. Before the shootings, he was very nervous though he took efforts not to show it.

The movie critics have highly appreciated the movie and nominated Armie Hammer for the Golden Globe Awards in the category Best Supporting Actor.

In April of 2017 Armie together with his wife visited Moscow. He became the guest in the Evening Urgant show in which he told about the forthcoming premiere of the movie Free Fire and his son's birth. In production there are four with Hammer's participation – On the Basis of Sex, Freak Shift, Sorry to Bother You, Hotel Mumbai.