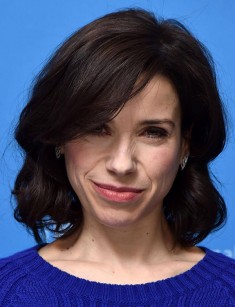 Sally Hawkins is spoken about as an intellectual actress from Great Britain and Mike Leigh’s muse. Her fans know her due to her roles in “Godzilla,” “Happy-Go-Lucky,” “The Shape of Water,” “Maudie.”

Sally Cecilia Hawkins was born in London in spring 1976. Her parents Jacqui and Colin, who were a book illustrator and children’s author, had already had a son Finbar.

Sally finished James Allen’s Girls’ School and Royal Academy of Dramatic Art in 1998. Her dyslexia did not prevent her from having a diploma of the prestigious educational institution – reading scenarios aloud helped solve the problem.

The successful graduate took part in classical Shakespeare’s and Chekhov’s plays and occasionally starred in movies and television. In her filmography, there are episodes in “Star Wars: Episode I – The Phantom Menace” and TV projects “Doctors” and “Catastrophe.”

Sally played a significant role in “The Longest Yard” by the British director Mike Leigh. He also offered the actress to star in the social comedy “Happy-Go-Lucky.” The role of the merry teacher Poppy was created specially for the actress.

Apart from the warm reviews by the audience and critics, the movie received The Silver Bear on the Berlin International Film Festival and Golden Globus for best actress. The movie also received two British Independent Film Awards, the nomination for Oscar for Best Original Screenplay, and two nominations for European Film Awards.

Before she was included in the cast of such a popular movie, for three years, Hawkins worked on the show “Little Britain.” The show “Nasha Russia” was based on the analogy with this satiric project.

In 2004, as the thriller “Layer Cake” Hawkins worked together with Sienna Miller, Tom Hardy, and Daniel Craig. In the same year, the actress took part in another Mike Leigh’s project “Vera Drake.” The movie won The Golden Lion at the Venice Film Festival, three BAFTA awards, and was also nominated for Oscar three times. In this story about a woman performing illegal abortions, Sally played Susan.

The further career of the actress is more or less steady. In 2005, she starred in the series “Fingersmith” based on the novel by Sarah Waters. The movie was nominated for BAFTA award. In this movie, the actress had the leading role of Suzanne Trinder.

Hawkings had already starred in another screen adaptation of this writer’s novel – “Tipping the velvet.” The movie was marked as the best feature on the festival Dallas OUT TAKES and won Television and Radio Industries Club Award as the best TV drama in 2003.

In 2006, the director John Curran turned Somerset Maugham’s novel “The Painted Veil” into a movie and invited Edward Norton and Naomi Watts. Unfortunately, the episodes with Sally Hawkins were not included in the final version of the movie.

However, she was brilliant in “Persuasion,” the screen adaptation of Jane Austen’s novel under the same title, and played Anne Elliot. The leading actress got the Golden Nymph Award on Monte-Carlo Television Festival and Royal Television Society Award for best actress.

Sally had a hand in creating the scenario of the comedy “Everglades” with Miranda Hart and James Corden. The critics had a chance to assess Sally’s acting in Woody Allen’s “Cassandra's Dream” where the actress performed with Colin Farrell and Ewan McGregor. The reviews on the movie were not so favorable.

The actress’s work in three movies was highly appreciated in 2010 – the drama “Made in Dagenham,” the comedy “Submarine,” and the fantastic anti-utopia “Never Let Me Go.” The latter was marked with five Saturn nominations, American Independent Movies Award, and British Independent Film Award.

In 2010, Hawkins took part in “Mrs. Warren's Profession” on the Broadway stage. Next year, Sally played Mrs. Reed in the screen adaptation of the cult novel “Jane Eyre.” Cary Fukunaga was the director; the actress cooperated with Mia Wasikowska, Michael Fassbender, and Judi Dench.

For the secondary role in the drama “Blue Jasmine” by Woody Allen, Hawkins was nominated for Oscar. In 2014, Sally’s career path was reinforced with the comedy “Paddington” and the leading role of doctor Vivien in the blockbuster “Godzilla,” the first movie of Universal Monsters.

In 2016, the actress starred in the movie “Maudie” with Ethan Hawke and got into the character of Maudie Lewis. Later, the actress got back to the funny story about Paddington. According to critics’ reviews, the sequel “Paddington-2” is as good as the first movie and will be of interest not only to children but also adults.

Sally Hawkins has no husband or children. The actress used to make an arrangement with her friend and colleague James Corden that in case none of them would get engaged before 35, they would marry. However, in 2012, James married another woman. The actress has no Twitter or Instagram account. The pictures from movie shootings, events, and news are published on the websites created by her faithful fans.

In 2016, the director Guillermo del Toro offered Sally to star in his movie “The Shape of Water” without auditions. The movie telling the story of a mute woman and a monster was out in a year and received The Golden Lion in Venice, Golden Globe for best director and best original song, National Board of Review Award for Best Film, Music, Best Director, and Production Design.

According to Producers Guild of America, “The Shape of Water” is the best movie of the year. Besides, Hawkins made an announcement about the cooperation with Craig Roberts in a new movie.

In 2019, the “Godzilla” sequel is to come out. Gareth Edwards refused to take part, and it is Michael Dougherty who is going to develop the topic of the fantastic monsters. Vera Farmiga, Bradley Whitford, Kyle Chandler, and Millie Bobby Brown will join Sally Hawkins. 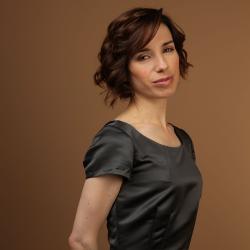