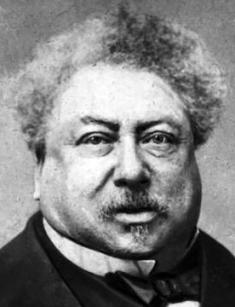 It is not a secret for anybody that artists tried to spiritualize the dead matter in all times. Sculptors carved statues, made of marble, the mixture of minerals turned into paintings under the brush of artists and writers did not only describe the world of the future in their works but also helped ordinary people to look at the events "with different eyes."

The works of one of the most famous French authors, Alexandre Dumas turn people's perception of the world upside down to this day.

On July 24, 1802, the "black devil" of Napoleon's army, Thomas-Alexandre Dumas and his wife Marie-Louise Élisabeth Labouret had a son named Alexandre. The privileged family lived in a commune in the north of France, Villers-Cotterêts.

The father of the future novelist was in the service of Buonaparte and was considered a close friend of the Imperial. They stopped being friends at a time when the commander did not support his decision on the entry of troops into Egypt.

Napoleon, who did not tolerate criticism, took revenge on his friend in his usual manner. In 1801, when the General was captured, his high-ranking friend did nothing to release his friend from prison. Thomas was exchanged for the Austrian General only two years later.

The man returned home exhausted and sick. He had deafness and blindness in one eye and stomach cancer. Dumas`s father died in 1806 and the family was left without means of livelihood.

The future world-famous writer spent his childhood in an atmosphere of ruin and poverty for this reason. His mother, who tried to get a scholarship to study at the Lyceum, introduced the beloved child to the basics of grammar and reading and his sister instilled a love of dance.

The young genius managed to enter the college, where the guy mastered Latin and developed his calligraphic handwriting.

Dumas`s first place of work was the office of the notary, in which the young man tried on the role of a clerk. The young man was tired of the same type of orders, despite the steady income. The young man gathered his things and went to the capital of France. He acquired a position at the Palais Royal in the office of Louis-Philippe, Duke of Orléans.

Alexandre met with local writers and began to create his first works of art at the same time. In 1829, his play «Henry III and His Courts» was published, after the production of which the novelist became famous. More than seven performances were staged in less than 16 months.

His biography developed in such a way that Dumas took every part in society. In addition to the fact that the writer led the excavations of the city of Pompeii, he was also a member of the French Revolution (1830). There was a false message in the press that the novelist was shot after the next revolt among the population. The creator of the trilogy of " The Three Musketeers " left Paris and went to Switzerland on the advice of his friends, where he prepared an essay for a publication.

Dumas had the passion first and then indifference to literature like with women. Alexandre was fond of poetry.

In 1838, Dumas made his debut as a writer. The novel "Le chevalier d’Harmental" was published in the newspaper, which required an exciting intrigue, speed, action, strong of passion and the location of the heads, where the passage promised to be even more impressive in the next issue.

Few people know but the author of "Le chevalier d’Harmental" was another novelist but Alexandre modified it and it was published under the name of Dumas. It was made on the requirement of the customer, who believed that only a famous name would provide the real success of the novel.

The historian traveled in Europe a lot and dreamed of going to Russia. In 1840, he published his novel "The Fencing Master", whose main character was the Decembrist. Even the Empress Alexandra Feodorovna read this scandalous masterpiece secretly from her husband, although his work did not pass censorship on the territory of the Russian Empire.

When Nicholas I died, the playwright was allowed to enter the Empire. The novelist was pleasantly surprised when he was in the homeland of Alexander Pushkin because the local audience knew about French literature and had an idea about his work. The famous writer visited Moscow and St. Petersburg, Kalmykia, Astrakhan, even the Caucasus.

The publicist was a cook too. He described the preparation of individual dishes in detail in many of his works.

His book "Great Dictionary of Cuisine," containing 800 short stories on the culinary theme, was published in 1873, after the death of the writer. Alexandre Dumas was neither a gourmet nor a glutton. The man led a healthy lifestyle, without drinking alcohol, tobacco and coffee.

The famous publicist was engaged in hunting, fencing and even architecture. But his greatest love was the female sex. He had a lot of affairs.

One woman was special for the artist among his mistresses and wives.

Dumas lived on the same street with Ida Ferrier, who was the actress, she was famous for her frivolous temper. The young people were neighbors: she occupied the apartment on the second floor and an aspiring writer had three rooms on the fifth floor.

The playwright went to a ball one evening. The man slipped and fell into a puddle on the way to the ball. The disgruntled publicist returned home. He was covered in mud, he went to his wife's apartment and went into the flat of his wife an hour later. Alexandre worked a lot to forget this unpleasant case.

The astonished writer saw the naked man on the threshold, who said: "It is enough, I'm completely chilled!" in less than half an hour. Dumas was furious. The famous journalist said that his education does not allow him to stand out the unexpected, but a guest.

They all slept at home. Alexandre took the hand of the lover and put it on the intimate place of his wife and declared solemnly:

"Make peace like the ancient Romans did in a public place."

The first passion of the historian was the dressmaker Marie-Laure-Catherine Labay, who lived in the same house with him. The woman was eight years older than Alexandre. It was not difficult for him to win the heart of Marie. She gave him a son Alexandre on July 27, 1824, who is known for his novel "La Dame aux Camélias". His father recognized the child seven years after his birth. On May 26, 1864, the former lovers met at the wedding of their son. Dumas had the idea to marry his elderly parents but it did not happen.

According to biographers, the creator had about 500 mistresses. Dumas repeatedly said that he changed women as gloves because if he had to be limited to one young lady, the poor woman would have died in a week.

The famous novelist died on December 5, 1870. The son of the classic of world literature made the reburial of the remains of his father next to his parents.

Biographers hypothesized after the death of the publicist that the Frenchman Dumas and the Russian poet Alexander Pushkin was the same person.

Despite the resemblance and the vast number of "white spots" in the biography of both creators, there was not an official statement.

Dumas`s bestsellers are published to this day. So, ABC Publishing House published a masterpiece of world literature " The Three Musketeers " in 2016 and " Le Comte de Monte-Cristo " in 2017.

One of the streets of the city of Lomonosov, the district of St. Petersburg is named after the publicist.

Smiling bronze Dumas sits on top of a majestic granite block. This monument is located on the square of Malesherbes in Paris.