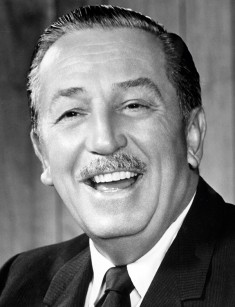 Walt Disney is an American cartoonist and movie director, the founder of the studio “Walt Disney Productions” that has turned into the powerful media empire “The Walt Disney Company.” It was Disney who created the first talking cartoon. Throughout his career, he created more than a hundred movies for which Oscar was awarded 26 times; he was also a winner of dozens of other prestigious movie awards.

Walt Disney was born in Chicago, but his parents moved with him and his elderly brother Roy to the village in the state Missouri when he was 5; in several years, the family moved to Kansas City. Since childhood, Walt liked painting, but he did not have a special training.

As a teenager, he had to work to help his family survive in the challenging epoch – it was the First World War. By the way, before the end of the war, Disney worked as an ambulance car driver in France for a year.

Having returned home, the young man got hired as an artist at the movie studio where his job was to create ad videos. At that time, Walt began to experiment on painted animation and even founded his own studio “Laugh-O-Gram” which, however, went bankrupt.

Still, Disney was not stopped by this event. He involved his elder brother in his business; they moved to Los Angeles and established a Hollywood studio “The Walt Disney Company.” It was a small organization in which the brothers and their friend, the artist Ub Iwerks, were the key employees.

The first experience of the Disney studio was the cartoon series “Alice’s Wonderland.” Walt created more than 50 short silent stories about Alice, the main character of Lewis Carrol’s tale. At that time, the unique style of Disney products started up.

The first original character created by Disney was not the famous Mickey Mouse – it was Oswald the Lucky Rabbit; in 1927, the cartoon about him came out and turned out to be quite popular. The legendary mouse appeared in a year in the movie “Plane Crazy,” and his name was Mortimer.

In the same year, Mickey Mouse got his real name and sparked furor since the cartoon “Steamboat Willie” where he appeared became the first talking cartoon in the history of the cinematography. By the way, Walt Disney himself voiced the mouse.

Later, a large collection of more than 70 musical stories under the general title “Silly Symphonies” followed. In this collection, the audience got acquainted with the future favorite characters – Donald Duck, Goofy, Pluto, and many others.

Soon, Walt Disney had an idea to create the first full-length cartoon. It was the screen adaptation of Brothers Grimm’s “Snow White and the Seven Dwarfs” that brought the author the title of the cartoon king.

The success was reinforced with other full-length animated movies – “Pinocchio,” “Dumbo,” “Bamby,” “Cinderella,” “One Hundred and One Dalmatians,” and many others. The last cartoon released in Walt Disney’s lifetime was the story about Mowgli – “The Jungle Book.” After his death, artists finished “The Aristocats.” The work of Disney and the great artist Salvador Dali “Destino”, unfortunately, remained unfinished.

In the late 1940s, the studio “Walt Disney” began to expand its opportunities. While they used to be limited to cartoons, feature movies also began to appear; they were oriented mainly on children. Disney’s acting educational movies about wildlife were intended for children and teenagers: “The Vanishing Prairie,” “The Living Desert,” and others.

Walt worked as a producer of the adventurous movies “Treasure Island,” “Robin Hood,” and the famous musical movie “Mary Poppins” that won 5 Oscars.

One cannot but mention that for Disney, not only the pictures, but sounding was also significant. He always thoroughly selected the musical accompaniment so that it would underline and multiply the effect of the events perception. Besides, the cartoonist was often a movie pioneer.

He produced the first talking cartoon, the first movie with stereo sound, the first full-length animated movie, used the filming on three film footages at the same time. Except for this, he was giving bonuses to any employee who suggested an interesting idea, so his colleagues were always encouraged to work productively.

Once, going for a walk with his daughters, Disney thought about creating a special place for children to amuse themselves and spend time with their parents around their favorite cartoon characters.

In 1953, he finally persuaded 17 families to sell him their land; 50 km from Los Angeles, he built the amusement park whose size and technical opportunities were striking. The park was opened in two years, and now it is globally known as Disneyland.

Walt Disney was married only once. Lilian Bounds, the secretary in his studio, became his beloved woman with whom he lived to the death. They married in 1925 and dreamed about a child for a long time. However, for 8 years, each pregnancy ended tragically. Walt and Lilian suffered a lot. Finally, in 1933, their daughter Diana Mary was born.

Four years later, the couple adopted an abandoned girl and named her Sharon May. As all people used to notice, Walt was an exemplary family man and spent all his spare time with his wife and children.

It is funny, but the creator of Mickey Mouse was afraid of mice for all his life.

Politically, Walt Disney was an avid anti-communist. He cooperated with FBI and wrote reports on his Hollywood colleagues allegedly inclined to the red. In the declassified documents, one more detail was revealed: during the Second World War, Disney supported the idea of anti-Semitism and saw the German politics in the positive light.

Walt Disney died in 1966 of lung cancer. Because of this, the movies and cartoons of Disney portray no smoking characters. The cartoonist’s body is often said to be frozen in a special camera so that he could be revived in future. In fact, Disney’s ashes were buried in the Forrest Lawn cemetery in Los Angeles.

Two movies have been devoted to the legendary man. In the biographical drama “Saving Mr. Banks,” Tom Hanks played Walt. In the documentary movie from the series “Geniuses and Villains of a Passing Epoch,” the Russian actor Dmitriy Filimonov played the cartoonist. 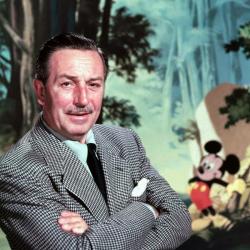