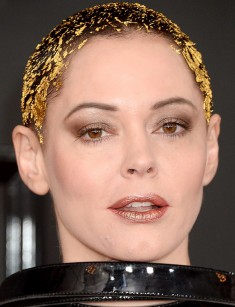 With such an unhappy childhood, life should have given Rose good luck and carefree time. However, one would not wish the events that the actress had survived in 2007 to one’s worst enemy: the star had an accident. At that time, the woman was wearing sunglasses whose pieces hurt the actress’s eyes.

Surgeons had to work delicately and return the splendid beauty of the “famous witch.” Comparing the photos before and after the accident, some fans complain that “the Charmed” has lost her former sexiness. Still, despite numerous surgical operations, 43-year-old McGowan looks gorgeous.

The future Hollywood star Rose Arianna McGowen was born on September 5, 1973, in Florence, the sunny Italian city on the Arno. Her mother Terri was of the French origin and wrote books; her father Daniel was an Irish artist. Except for Rose, there were six more kids in the family. The creative McGowens were traveling all over Europe, and the girl got acquainted with new cities and countries.

Even though Rose grew up in an intelligentsia family, the future star’s childhood cannot be called happy. It all began when Daniel joined the cult “Children of God.” The new religious movement members associated the real world with the concept of “system” and believed in Apocalypse and “spiritual revolution” that should dominate over the external life: in this sect, reading books and watching TV were forbidden. To make the cult members more obedient, they were kept in darkness.

Although Rose believed in God, she did not worship the brotherhood; the attitude toward women who were perceived as a sexual object was particularly strange to her. The little girl dreamed that she will grow up free of this destructive cult.

Later, the family left “Children of God” since the leaders stared encouraging incest.

When the girl turned 10, her parents divorced, and Terri and her children moved to Washington. The sect activists were against “the American lifestyle,” so Rose did not know a single English word. In spite of the colloquial language problems, the would-be actress liked living in America. Perhaps, Rose’s life in the USA could be happy, but one of the mother’s numerous lovers spoiled the stepdaughter’s life. He had a great influence on Terri: because of his pleading, 14-year-old Rose was sent to a substance abuse clinic – as the stepfather falsely stated, the young lady was an avid drug abuser.

The would-be star managed to escape the clinic: at 15, she legally dissociated herself from the parents’ guardianship and found shelter in her grandparents’ house.

The next year, McGowan left the relatives to start living independently. The girl settled in her boyfriend’s house. Who could have thought that the future Paige Matthews was serving coffee in a restaurant, worked with transport tickets, and tried to work in an office? However, after Rose’s lover died, the girl was alone. Sometimes, the rebel had to camp out.

Despite life ordeals, McGowen graduated from school and entered the College of the Arts in Seattle at 17.

The actress’s filmography includes more than 50 works. The pale brunette with brown eyes and gothic appearance rarely took part in comedies and played “good girls” in mystical thrillers or horrors.

After the action movie ‘The Doom Generation” (1995), the actress became popular among directors who began to entrust the pretty woman the main characters.

Rose’s early brightest roles included the charming antihero in “Jawbreaker” (1999), the sexy beauty in “Scream” (1996), and crafty Georgia in the movie “Lewis and Clark and George” (1997).

The actress became famous due to the series “Charmed” that was broadcast in 4 countries from 1998 to 2006.

It is the mystic story about three completely different sisters who used to live ordinary girls’ lives in their deceased grandmother’s mansion.

However, after the youngest sister finds the ancient spell book, the beauties’ fates change dramatically: Piper, Phoebe, and Prue acquire magic abilities that become a supernatural instrument in the unequal struggle against evil.

In 2001, McGowen changed Shannen Doherty and become the new sister – Paige Matthews. Rose’s character is a rebel who made her lifestyle “right” after her parents’ death and began to help people.

Rose appeared only in the 4###sup/sup### season of the series, but the sexy brunette Paige capable of telekinesis caught the audience’s fancy and captured men’s hearts. In 2005, the young woman even won “The Best Sister” Award for her role in “Charmed.”

It would be surprising for such a “mystical” girl to fall in love with an ordinary guy. In 1998, the most bodacious king of the American rock Marilyn Manson appeared in the beauty’s life. The outstanding lovers complemented each other perfectly, and the excited fans believed that the crazy show-business figures could not exist separately. Rose was similar to the singer who enjoyed shocking the public: the lovers would appear on the red carpet in extravagant clothes together.

For example, at MTV Video Music Awards, the audience’s eyes were drawn to the tiny (163 cm) woman, not the “great and terrible” Marilyn Manson. The actress was wearing the dress that journalists called “the most provocative dress ever.”

The dress was made of small beads and demonstrated the star’s naked body. This spectacular look has not been surpassed 19 years later by Lady Gaga, Rihanna, and even the weir Miley Cyrus.

The eccentric lovers split up in 2001. The real cause of the breakup was announced by Rose only in 2015: it was Manson’s drug addiction.

Although “the witch Paige” is cute and charming, she is not lucky in love. After the relationship with Manson, she had love affairs with men, but all of them were short-term. Rose’s last boyfriend was the artist Davey Detail. The lovers’ affair evolved into the marriage in 2013, but two years later, it ended. In 2016, the star filed divorce papers.

It is known that the single 43-year-old actress has not any children.

Rose likes to shock her fans. While the fans were more or less positive about her short haircut, her bald head made quite negative impressions. In each new Instagram video, the followers split into two fractions: for and against. By this action, the woman drew attention to sexism. She told the audience that she was raped by a producer (his name was not announced) who remained unpunished.

The viewers get acquainted with the writer Kelly Johansson who is going to destroy the myth of supernatural phenomena existence. 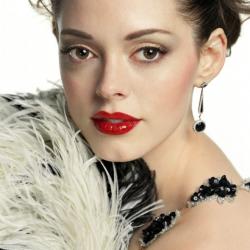