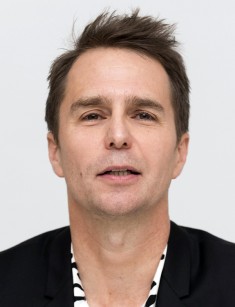 Sam Rockwell is a talented actor, fancied by his admirers for his roles in the movies "The Green Mile", "Frost-Nixon ", "Box of Moonlight " and also in other movies, that became cult. Rockwell's talent and charm helped him not only to attract the attention of millions of fans in the world but also to become the winner of the prestigious Golden Globe movie awards.

The future idol of movie men was born on the 5th of November of 1968 in Daly-City, California. His parents – Pete Rockwell and Penny Hess were the beginning actors at that time. That’s why it’s not surprising that the biography of Rockwell Jr. was connected with the movie industry. When Sam turned 2 years, his family moved to New York, because his parents saw better chances of getting significant roles here.

In 1973 the boy’s parents decided to separate. Sam lived with his father, who moved to San-Francisco after the divorce. Little Rockwell saw his mother only during holidays and his father’s vacation. His mother was constantly taking him to the theater or to the movie set, that’s why Sam got an idea about actors’ routine since his childhood.

Sam Rockwell is obliged to his mother for his first stage appearance. She took a lot of efforts so that her son could get a small role in the comedy sketch. Sam wasn’t even 10 years old at this time. It was found out, that the boy inherited his parents’ acting talent: young Rockwell was like a duck to water on the stage.

After this event, Sam's father sent him to the school of arts to develop his talent. Sam Rockwell was studying in the same class with Aisha Tyler (a popular actress and comic) and Margaret Cho (this girl became an actress, singer, and designer).

It seemed that there was a favorable learning environment. Though Sam couldn’t avoid the difficulties of the tender age: for some time he even didn’t attend his lessons, because he was carried away with parties, was rolling with people and was into his first romantic relationship. The things went so far, that Rockwell was dropped out from the school.

But some time later the young man pulled himself together and finished another school "Urban Pioneers ". At the same time, Sam Rockwell remembered about his interest in the acting career. Being a student of the graduating year, the young man began his own filmography with the first role in the horror movie "Clownhouse" (1989). The movie received a couple of awards and the aspiring actor understood, that he had found his calling.

Sam Rockwell graduated from school and moved to New York to begin a serious career in the movie industry.

During two years Rockwell was studying the basics of acting in "William Esper Studio " - New York Drama School. Eminent Terry Knickerbocker became his master. Sam was a talented young man and soon he was noticed by the teachers and directors. During his studies, Sam managed to play roles in the episodes of the series "Law & Order", "The Equalizer", "NYPD Blue".

Later the actor confessed that these years were the hardest in his life. All the time Sam Rockwell lacked money and he had to work as a waiter, to film in numerous commercials and deliver food to the clients. Everything changed in 1996 when Sam received the role in the movie "Box of Moonlight". This movie let the actor present himself to the public.

A year after the new movie featuring Rockwell came on the screen. It was a touching movie "Lawn Dogs", where the actor appeared as the character of the lawn mover Trent, who made friends with the little girl. The audience really fancied that character. Mischa Barton was his partner in this movie.

His next significant work was the role in the movie "The Green Mile" directed by Frank Darabont. This screen adaptation of the Stephen King’s novel received a great number of awards and nominations and the actors, who took part in the movie almost became famous overnight. Sam got the role of the violent maniac, who killed two little girls. Such famous actors, as Tom Hanks, Michael Clark Duncan and Doug Hutchison took part in this movie.

Following this success, Sam Rockwell expanded his filmography every year. The actor filmed in such movies as "The Charlie’s Angels", "Confessions of a Dangerous Mind", "Matchstick Men", "A Midsummer Night's Dream", "Seven". The spectators especially appreciated the movie "Iron Man".

It is noteworthy, that the leading role of Tony Stark, performed by Robert Downey Sr. could have been the role of Sam Rockwell. But the destiny was elsewhere and Rockwell appeared only in the second part of the epic movie "Iron Man 2" (2010) as the character of the villain Justin Hammer.

The roles of Sam Rockwell are absolutely diverse, what highlights his acting talent one more time. The man takes part not only in commercial movies but also in independent films for art admirers.

Handsome Sam Rockwell (the height of the actor is 175 cm) has never suffered from lack of attention of the girls in the romantic mood. Though no one of these girls managed to formalize their relationship with Sam. Rockwell repeatedly stated that family life was not for him.

Nevertheless, the actress Leslie Bibb, with whom Rockwell began a relationship in 2007, managed to enchant the charismatic actor. It's possible that in some time the fans will be happy to see wedding photos of the couple in "Instagram" and other social networks or at fan-pages of Rockwell.

In 2017 the lovers were asked to tell about the secret of such long-lasting and strong relationship.

Leslie Bibb answered that good sex was the key answer. Sam added modestly that the secret was their constant sincere communication.

At the beginning of 2018 actor received the desired Golden Globe for the Best Actor in a Supporting Role in the movie "Three Billboards Outside Ebbing, Missouri". This movie directed by Martin McDonagh tells a story about the single mother Mildred Hays (actress Frances McDormand ) and her life tragedy.

The daughter of this woman was raped and killed, and the police weren't eager to solve this case. Then Mildred took charge of the investigation. Sam Rockwell played the role of the police officer Jason Dixon.

At present times Sam Rockwell is working in the new movie under the title "Blaze". It is already known that this movie directed by Ethan Hawke will tell the audience a story about the complex life of the real musician Blaze Foley. 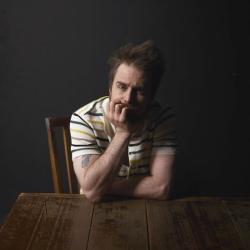