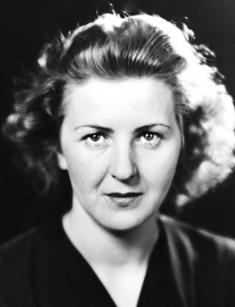 The woman worshiping the tyrant and dictator Adolf Hitler was modest, nice, and submissive. The whole world was fearing him, and he was spreading death and destruction everywhere – Eva worried about his health and dreamed of marrying the man. The innocent heart’s hopes came true, yet she had to pay a high price for that.

Eva Anna Paula Braun was born into a typical Aryan family of the early 20th century: a silent mother and a despot father who wanted a son and got three daughters instead. Eva was the second child in the family. She was born on February 6, 1912; her elder sister Ilse was born in 1909; the youngest one, Gretl, was born in 1915.

Eva’s family was quite wealthy. The father, Friedrich, worked as a school teacher; the mother, Franziska, used to be a tailor but devoted herself to the family after her daughters appeared. The girls were brought up with the iron fist: they had to be obedient in everything and lacked parental warmth and tenderness. They were prepared to become the women of their epoch whose destiny included the three Ks: Kinder, Küche, Kirche (children, kitchen, church).

Despite the conservative worldview of the epoch, Eva Braun had a good education. She went to an elementary convent school, a Catholic lyceum, and the Convent of the English Sisters in Simbach am Inn that people called “the smithery of future wives”.

As long as the 17-year-old woman learned typing, some French, accounting, and housekeeping, she returned to Munich where the parents helped her get hired at Heinrich Hoffmann’s photo studio. Eva gladly learned the basic principles of photography.

The relationship with Hitler

Young Eva dreamed of overwhelming mutual love. Life turned out to be different: the middle-aged authoritative man, not a prince charming, grabbed the woman’s heart. Promising and self-confident, Adolf Hitler was one of the studio owner’s friends. Soon, Hitler noticed the photographer’s cute assistant. Eva was not interested in politics and did not know what kind of person he was; she threw herself in the romance.

Hitler’s biographers emphasize he could charm anyone and make them see things just like he did; the politician was like a magnet for people. Naïve and romantic Eva Braun could not resist the handsome 40-year-old man who showered her with sophisticated compliments.

Eva fell in love madly. Were her feelings mutual? Hitler was flattered by the pretty girl’s attention; he liked her athletic body, height, and slightly foolish facial expression. According to Hoffmann, Eva’s naivety, narrow-mindedness, and political apathy inspired the notorious politician.

The Aryan leader’s quote confirms that idea: “A highly intelligent man should always choose a primitive and stupid woman”. He stayed away from smart, self-sufficient women who could influence his political career. Eva Braun did not play any role in the history of Germany. She just loved the tyrant and was ready to sacrifice her life for him.

Hitler was decisive and pushy in politics; however, he lingered in the relationship with his girlfriend. They often spent time together: walked in a park, went to the cinema, discussed books and sports. However, Hitler loved another woman, his close relative, Geli Raubal; he visited social events with her and rushed to her in the evening.

Braun knew about Geli and tried to conquer the tyrant’s heart for two weeks. After his half-niece’s mysterious death, Hitler saw Eva in a different way; a new period in their romance began. However, there are theories that Geli remained the only woman who could awake the Fuhrer’s emotions.

Adolf’s attitude toward Eva was ambiguous. He could be attentive and caring and then disappear from her life for several days or even months.

There were many rumors about the politician’s affairs. Eva was suffering, yet she forgave his adventures silently. This man’s demonic charm often made women so crazy they were ready to give up their lives for him.

It was hard for Eva, who had been brought up strictly, to deal with her ambiguous status: the lover and fancy girl, not the wife. However, she did not even try to break the vicious circle and devoted herself to Hitler totally. Neither the parents’ prohibition nor the politician’s affairs and rudeness could change that.

Eva tolerated Adolf’s whims and suffered from his indifference and cold attitude; she had two suicide attempts. In 1932, she tried to shoot herself with her father’s gun; in 1935, the woman took pills.

A documentary about Braun’s life emphasized she lived in her imaginary world as if she were playing her role; suicide attempts were also called planned and ostentatious. Thus, she deprived Hitler of balance, made him worry, and took her tiny bits of attention.

The wedding in a bunker

When Hitler learned everything about Braun’s ancestry, it was the first sign of his serious intentions; he did not want to have a Jewish wife. In 1935, the Fuhrer bought a house for Eva and her sister Gretl. The woman’s position of the tyrant’s lover was something to be jealous about: she could have anything and frequently changed her dresses.

Still, isolation oppressed Eva. She could not participate in meetings even if they were held in her own house. When the Fuhrer made her a secretary, she began to accompany him during official events.

In 1944, the situation for the country changed for the worse, and Hitler forbade her to appear in the capital. By that time, he had made a will and considered Eva’s interest in the first place.

If was the first time when Eva, trembling with fear, did not listen to her beloved one. On February 8, 1945, she went to Hitler; she realized she was going to face her death. The dream of her life came true: touched by her actions and sacrifice, the tyrant proposed to her right in the bunker.

The wedding ceremony took place on April 29, 1945. The bride was wearing a black dress according to the groom’s wish. There were candles, wine, and songs played by a gramophone.

On April 30, 1945, the newlyweds committed suicide together.

Why did the loyal and lovely woman have to die? It was her love for her husband; she did not want a life without him. As soon as Hitler’s evil empire collapsed, there was no other way for Eva but to follow him in death.