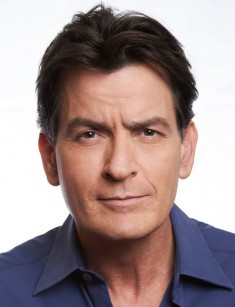 Charlie Sheen is an American actor, who became famous for the roles in the films Red Dawn, Platoon, Wall Street and Hot Shots!. Sheen won a Golden Globe Award for his work in the sitcom Spin City. In 2010, Charlie Sheen was named the highest paid actor, since he earned $ 1,8 million for each episode in the TV series Two and a Half Men.

Charlie Sheen (his real name is Carlos Irwin Estévez) was born in New York City in the family of Martin Sheen (Ramón Gerardo Estévez), a Hollywood actor and director. Actress and producer Janet Templeton was the mother of the future celebrity. Charlie has two elder brothers, Emilio and Ramon, and also a younger sister, Renée. All children became actors, but only Carlos performs under a pseudonym, similar to the stage name of his father. The brothers and sisters film under their real surnames.

When the boy was four years old, the family moved to the town of Malibu, California, where Carlos went to Santa Monica High School. There he showed an early interest in sports. He became a baseball player of the first team and later was a school star, as a pitcher. At the high school, the young man took a great interest in cinematography and even shot his amateur short films together with Sean Penn and Rob Lowe, his friends, who also became well-known actors.

A few weeks before graduation, Carlos Estévez was expelled from the school for poor grades and attendance. Later, the young man took the stage name Charlie Sheen and went to conquer Hollywood.

For the first time, Charlie Sheen appeared on the screen at the age of 10, when he played a bit part in the movie The Execution of Private Slovik, where his father starred too. The fantasy action movie Red Dawn about the Third World War and the invasion of the Soviet troops in the USA received negative reviews from critics because of a strange plot. In Russia, the actor is still called "kinoklyukva" (an actor in a fantasy film), and in Germany, the film was even banned in the cinema. Nevertheless, the acting of Charlie Sheen and Patrick Swayze, his partner in the movie, was appreciated.

In 1986 Charlie Sheen appeared in the war drama Platoon. The film tells about internal conflicts of the American military unit. According to experts, this film could show the real events of the Vietnam War. The movie was named the best in the actor’s acting career. Initially, Emilio Estévez, Charlie's elder brother, was cast for the title role. But before they started shooting, the director had chosen Charlie Sheen. The actor and other members of the crew attended basic combat training which was conducted by Dale Dye, a veteran of the Vietnam War, retired Marine Captain. Charlie Sheen says that the advice and training of the former military man helped to create a historically accurate film.

Beyond the Law was the next film, which viewers also liked. In this film, the actor played a leading role.

The film The Chase (1994) was called one of the American actor’s box-office flops. The movie received negative reviews from critics, and its rating was 29% on Rotten Tomatoes, the site which collects online reviews from writers who are certified members of various writing guilds or film critic-associations.

It was soon followed by the film The Arrival. The film is very unusual in the career of the actor because Sheen got the role in a fantasy thriller about extraterrestrial civilizations.

But the actor played not only in action films, thrillers, and war dramas. In the artist’s filmography, there are several comedic roles. The most famous film in Russia is the comedy Hot Shots!. It is noteworthy that the title character (Charlie Sheen) is called Topper Harley, and in the humorous sitcom Two and a Half Men, where the actor starred from 2003 to 2011, his character is called Charlie Harper, and according to the screenwriters of the television series, it is an anagram with this name. Later, it was the comedies and series that made the actor famous.

The film Two and a Half Men is also known for the fact that after the shooting of the 8th season, the managers of the series had to pay Charlie Sheen a forfeit since they decided to fire the actor because of the scandal involving the alcohol and drugs abuse. Thanks to this payment, the American set a Guinness World Record for "Highest Paid TV Actor Per Episode — Current."

The actor, as well as many show business stars, had a lot of romantic relationships. Cassandra Jade Estevez, Sheen’s daughter, was born in 1984, although he was not married. Her mother was Charlie's school friend, Paula Profit.

In early 1990, Charlie Sheen was engaged to actress Kelly Preston, but when he accidentally shot her in the arm, the woman broke off the relationship. Later the actor had love affairs with adult film actresses, Ginger Lynn and Heather Hunter.

The man has been married three times. Charlie Sheen’s first wife was actress Donna Peele, and they lived together for less than six months. In 2002, the man married actress Denise Richards, who gave birth to his daughters Sam and Lola Rose. The marriage lasted four years, and in 2006 Charlie and Denise divorced.

The third wife, actress Brooke Mueller, lived with him for three years and gave birth to twins Bob and Max, and in 2011 filed for divorce, citing the abnormal behavior of the husband because of alcohol abuse.

In the spring of 2011, Sheen was concurrently living with pornographic actress Bree Olson and model Natalie Kenly. In February 2014, Charlie Sheen became engaged to Scotty Ross, better known as Brett Rossi, the adult film star. They wanted to marry, but in November of that year, the engagement was broken off with an announcement that the two had "mutually decided" to separate.

Charlie Sheen is the owner of a clothing line for children, called Sheen Kidz. In 2011 the actor also set a Guinness World Record for Twitter as the "Fastest Time to Reach 1 Million Followers", adding an average of 130,000 new followers per day.

In 2015, Charlie Sheen’s fans found out that the actor was sick. On November 17, 2015, the actor publicly revealed that he was HIV positive on NBC's "Today" show. According to Sheen, he said this information to get rid of unknown blackmailers, because by that time he had paid extortionists approximately $10 million to keep his HIV status secret.

The famous Hollywood actor soon frankly told reporters how he caught HIV. The man said that the reason was his carelessness because he had casual sex.

In 2017, the actor told the media that his state of health improved after receiving the experimental HIV medication, PRO-140. Charlie Sheen agreed to undergo this course of treatment at the beginning of 2016.

Earlier, the actor had weekly injections but soon refused taking pills. According to the celebrity, antiretroviral therapy caused severe side effects and symptoms of dementia.

According to Sheen, when he gave up drugs, he felt "a physical and emotional transformation."

In April 2017, the media reported that Charlie Sheen in a condition of drug intoxication was detained on the border with Mexico. RadarOnline reported this information and had photos of Sheen's arrest.

In the pictures, the actor was with his hands handcuffed surrounded by immigration service. At San Diego International Airport, law enforcement officers opened the actor’s suitcase, suspecting that the actor was transporting drugs, but the information turned out to be false. When officers searched the actor, there were no drugs.

In January 2017 Charlie Sheen was involved in another scandal. The actor insulted singer Rihanna at Watch What Happens Live with Andy Cohen.

The TV host asked the artist to comment on the quarreling with Rihanna on Twitter. The actor replied that the singer did not know the basic rules of courtesy.

"Sorry we're not KOOL enough to warrant a blessing from the Princess…" the actor joked on Twitter.

In turn, Rihanna answered Charlie, posting a photo with an image of her signing an autograph for a fan with Sheen's head superimposed. 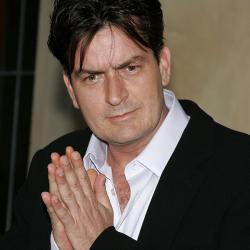