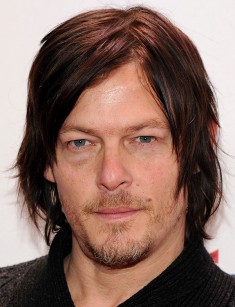 Norman Reedus is an American actor. He is famous due to his role in the series The Walking Dead. Norman Reedus was born in the town of Hollywood which is situated in the territory of Florida State. Norman Reedus Sr. and Marianne Reedus became the parents of the future celebrity. Moreover, Norman has a younger sister.

The boy spent his early childhood in the Californian town of Los Angeles. When Norman turned twelve, his parents decided to divorce. The children stayed with their mother, and in future, they rarely saw their father. To support her children and to earn for her living Marianne had to relocate a lot from one place to another, not only to the American cities but also to other countries. They lived in San Francisco, in the states of Texas and Colorado. They even tried to settle their life in Spain and even in Tokyo, the capital of Japan.

Having come back to the U.S., Norman received the job of the sales-assistant in Harley Davidson motorcycle shop in the Californian town of Venice. Sometime later the young man relocated to Los Angeles — the town where he spent his childhood. In California Reedus was working partly as a photo model and also took part in the fashion clothing displays.

The handsome man (Norman is 178 cm tall) cooperated with the popular brands. Reedus was offered by the brand representatives to cooperate with Prada, Alessandro Dell'Acqua, Durban, Levi's and Lexus. Later, Norman tried himself as an actor and performed the role in the play Maps for Drowners staged in Tiffany Theater which is situated in Western Hollywood.

Norman tried to get to the movie industry for a long time, but he managed to do this only in 1997 when the beginning actor was approved for the shootings in the episode of the horror movie under the title Mimic. The role of the guy called Jeremy turned out to be successful, and Reedus was invited to play the role of the leading character Harold in the comedy Six Ways to Sunday directed by Adam Bernstein.

Later the actor received the roles in the pictures 8mm, I'm Losing You, Trouble Maker, Davis Is Dead and Floating. In 1998 there was released the psychological picture Dark Harbor in which the British actor Alan Rickman became the partner of Norman Reedus on the movie set.

In a short time there came out the crime thriller with the black humor elements under the title The Boondock Saints which became a real breakthrough in the career of Norman Reedus. The public and movie critics began to discuss the actor everywhere. For the role of one of the cultist brothers of Murphy MacManus, the American actor has received a lot of enthusiastic reviews and positive comments from the movie admirers and critics.

Then the actor had many roles in the movies which weren't appreciated by the TV spectators. Nevertheless, in the list of the actor's successful works of that period, the movie critics note the drama Gossip, mystical fighter Blade II, the comedy in punk style Luster, the drama thriller Antibodies, the thriller of the Russian production Moscow Chill, the musical Cadillac Records and the historical picture The Conspirator.

Besides, during this period Norman Reedus began to appear in the TV series. The actor took part in the series Masters of Horror, and appeared in the TV series The Soup and also performed the role of one of the demons in the mystical family picture Charmed. Further, the actor will receive the majority of his roles in the series.

The acting experience in the series had helped Reedus when he began to take part in the post-apocalyptic TV series The Walking Dead. The actor performs the role of the unsociable hunter Daryl Dixon. This picture was considered the best one in the creative career of the actor. Moreover, the fans of the series have noted the acting skills of Andrew Lincoln and Melissa McBride.

Norman Reedus doesn’t limit himself with the acting only. He tried himself in other spheres of cinematography. In 2006 the American actor had demonstrated his talents and skills as a scriptwriter and director when he presented the biographical movie I Thought of You about the jazz musician Miles Davis.

In 1998 Norman Reedus met the model Helena Christensen who is well-known due to the shootings in the video of Chris Isaak under the title Wicked Game. The couple was in a civil marriage, and in 1999 Helena gave birth to Norman’s son Mingus Lucien. But the young people didn't become the official wife and husband and separated five years later after their acquaintance.

After the break-up with Helena, the actor brought up his son on his own. He says that his son is the main treasure in his life. By the words of the American movie actor, he tries to spend more time with his son and quite often loses to Mingus in computer video games. Moreover, there was reported in the American press that Norman Reedus had relations with the actress Emily Kinney. The movie celebrities haven't approved this information.

In 2005 the actor had had the hardest car accident on the roads of Germany. Norman lost his left eye and a part of his face. Instead of his injured parts of the face, he has an artificial titan limb and a couple of bolts. Though, due to the high-level plastic surgery, it's almost impossible to notice any surgical interventions on the man's appearance.

Norman is an absorbed painter. Reedus often presents his works at the art exhibitions. Also from time to time, the American actor takes part in the shootings of the music videos of pop-singers with world-famous names.

In 2017 Norman Reedus appeared in public with the German actress Diane Kruger. Right after this Diane received The Palme d'Or at 70th Cannes Film Festival and Norman posted the photo of the movie actress on his Instagram. The web users began to think that the celebrities have a love affair. Before Diane and Norman together took part in the shootings of the picture Sky. At present, the movie stars haven't announced their relationship yet.

Reedus keeps taking part in the shootings of the movies. In 2016 there came the movie Triple 9 featuring the actor. There is information that the actor Gabriel Luna whom the spectators remembered due to his role of Ghost Rider Robbie Reyes in the series Agents of S.H.I.E.L.D. told in the interview to the journalists that he would like to see Norman in this movie. Reedus told more than once that he was interested in this personage and he would take part in this project with great pleasure if he had such an opportunity.

In 2016 there came out the movie under the title Ride with Norman Reedus. This documentary series is dedicated to the trips by motorbikes or motorcycles. In spirit, the pictures remind Top Gear project, but the movie is not saturated with extreme challenges which are regularly demonstrated in the British TV show.

Together with various celebrities, Norman has realized some trips around the picturesque places in the USA to learn more about the bike culture, to test the motorcycle for power and also to feel the reckless life of the biker. The admirers of the movie actor have become interested in the new picture. The TV spectators have admitted that the first series of the program was very interesting as the creators of the project have shown the real life of the people who were captivated by the freedom and romanticism of the big road. 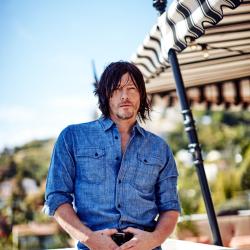