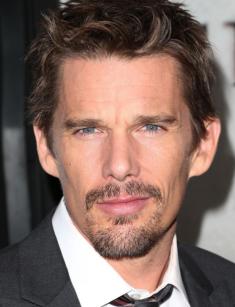 Ethan Hawke is an American actor who has also proved himself to be a talented screenwriter, director, and even writer. Hawke became famous as an actor playing in the movie Training Day and as a director shooting the project Boyhood.

Ethan Green Hawke was born in November 1970 in Austin, Texas. Ethan's mother, Leslie Green, gave birth to the boy when she was only 18 years old. The early marriage to his father, an insurance actuary, ended immediately after the birth of their son.

In elementary school, Ethan Hawke became interested in literature. The boy even dreamed of becoming a novelist and writing thick books. But his priorities changed when he visited a theater group by chance and got a role in the play. So, young Hawke turned it into his dream and wanted to become an actor, shining on stage.

In high school, Ethan Hawke performed on the stage in amateur performances. When the teenager was 14 years old, Hawke was offered to play a bit part in the documentary film Explorers. Then Hawke finally decided to pursue an acting career. The young man began to attend the famous McCarter Theatre. Later, he studied acting at the British Theater Association and Carnegie Mellon University.

Hawke continued to develop his acting career when the young man turned 18 years old. Ethan appeared in the full-length film Dead Poets Society. The project was very successful and became cult. It helped the young actor to reach the cinema stardom. This movie was the start of Ethan Hawke’s stellar career.

Hollywood producers paid close attention to the young actor. Hawke landed a new role in the project White Fang in 1991. Ethan portrayed the hero, Jack Conroy, brilliantly and convinced all those who doubted him that he had real talent. He began to receive offers to play in new exciting projects. These are the films Waterland, Rich in Love, Mystery Date, and Reality Bites. The last project was very successful and made Ethan Hawke famous.

It should be mentioned that the actor tried to play diverse roles, even if similar characters brought him fame. Hawke filmed in dramas, comedies, and historical projects in which he portrayed the heroes of a different era. But viewers especially appreciated Ethan’s roles in romantic movies and melodramas. The most prominent films of this genre are Before Sunrise and Great Expectations. Each of them is a film masterpiece.

In 2001, the actor was first nominated for the Academy Award. It happened after the release of the great movie Training Day. It is noteworthy that Hawke received the Oscar nomination for Best Supporting Actor in this project.

The same year, Ethan proved himself to be not only a talented actor but also an outstanding director. His debut film, Chelsea Walls, was so good that it was shown at the Cannes Film Festival. Hawke worked as a screenwriter in the sequels, Before Sunset and Before Midnight. The first film earned Ethan the Academy Award for Best Screenplay.

The Hollywood star managed to show his versatile talent creating the project The Hottest State. Ethan Hawke wrote the novel of the same name, created the script, based on this book, and then directed the film.

Another prominent work directed by Hawke is the movie Boyhood. Ethan took up this project in 2002 and finished shooting in 2012.

As for literary activity which was Ethan Hawke’s first dream, the man could also realize his potential. In addition to the above-mentioned novel, he wrote one more book "Ash Wednesday."

For the past ten years, Hawke has mainly appeared in thrillers, action movies, and horror films. The prominent projects are Doomsday, Assault on Precinct 13, Sinister, and Brooklyn's Finest.

The vampire science fiction movie Daybreakers in which Ethan Hawke played the leading role attracted special attention of fans. The film shows a dark world where a plague has transformed most of the world's population into vampires. Daybreakers shows the problems of both survivors and the new vampire society that suffers from a lack of blood necessary for survival.

In 2012, Ethan Hawke played a bit part in the sci-fi action movie Total Recall, a remake of the famous film with Arnold Schwarzenegger. Hawke played the title character before plastic surgery only in the director's cut of the film. Viewers of the final version complained that the behavior of the hero’s old friends looked illogical without the scenes with Ethan’s participation.

In 2014, the actor played a leading role in the science fiction film Predestination, the film adaptation of the story "—All You Zombies—" by Robert A. Heinlein, and in 2015 in the thriller Regression. Ethan appeared as Chet Baker in the 2015 drama film Born to Be Blue.

When the Hollywood actor played in the film Gattaca, he met the incomparable actress, Uma Thurman, who was not only beautiful but also surprisingly smart. She became known as one of the most intelligent women in Hollywood. The love affair of two stars soon turned into marriage. Hawke and Thurman’s wedding took place in 1998. The couple had two beautiful children: daughter Maya and son Levon.

But at some point, two bright and charismatic people could not live together anymore, and they broke up.

Ethan Hawke could improve his personal life in a new marriage. His second wife is Ryan Shawhughes who worked as a nanny to his children for a while. Ethan has felt more comfortable with this modest and ordinary woman, than with bright and tough Uma. The couple has two girls, Clementine and Indiana.

There were rumors that Ethan Hawke had a love affair with Angelina Jolie. The couple allegedly met on the set of Taking Lives. Two stars hid this brief and bright fling from everyone because at that time Ethan was the husband of Uma Thurman.

In 2016, Ethan Hawke joined the main cast of the western The Magnificent Seven. It is a remake of the 1960 film of the same name, which in turn is a reimagining of the 1954 cult film Seven Samurai, based on traditional Japanese folklore.

The protagonists of the western are mercenaries, adventure and head hunters, and even criminals who are hired by desperate villagers to protect them from the gun thugs of the local industrialist who keeps the village under control. Hawke landed the role of sharpshooter Robicheaux.

In 2016, Ethan Hawke also played a leading role in another western film In a Valley of Violence. The actor got the role of a drifter who took revenge on the bandits who killed his best friend. Hawke's partners on the set were Taissa Farmiga, James Ransone, Karen Gillan, and John Travolta.

In 2017, the actor played a bit part in the fantasy action movie Valerian and the City of a Thousand Planets directed by Luc Besson and also portrayed Reverend Ernst Toller in the drama film First Reformed.

The actor landed a leading role in the mystical thriller 24 Hours to Live. The film focuses on the assassin who is mysteriously brought back to life for 24 hours to seek redemption.

In January 2018, the romantic comedy movie Juliet, Naked premiered at the Sundance Film Festival. The actor played the role of a musician who was famous in the past and had a love affair with the title character (Rose Byrne). The same year, he also starred in the biographical drama film Blaze.

In 2019, the actor returned to Broadway in the revival of Sam Shepard's True West.

Ethan Hawke has a net worth of $55 million.