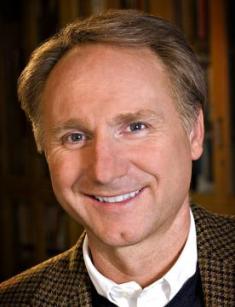 According to Forbes magazine, the author of the bestseller about Leonardo da Vinci is among the top 16 most "expensive" world writers. Fans of Dan Brown's talent love his works for the genre "composition" of thriller and intellectual detective.

Opponents call the writer a mystifier and adventurer, masterfully inventing "secrets" and "riddles" where they do not exist. But Brown's novels are sold in excessive amounts, filmed, and a multi-million army of fans is waiting for new exciting works.

The writer was born in American New Hampshire in the summer of 1964. He grew up in an intelligent family, where organically intertwined music and mathematics. The head of the family, Richard G. Brown, was a teacher of mathematics at the Phillips Exeter Academy. Richard Brown's textbooks are used to teach children in American high schools. His mother, Constance Brown, in the same elite educational institution, worked as a teacher of music and played the organ in the Episcopal church.

Dan together with his brother Gregory and sister Valerie grew up in a warm atmosphere of parental love and attention. The parents made the life of their children rich and fascinating, and children loved puzzles from an early age. At Christmas, the guys did not take gifts under the tree, but found them, focusing on the map with tips. Having solved the poetic charades and "secret ciphers," they guessed about the place where the parents had hidden the "treasure."

Dan Brown graduated from a private school at the academy, and then the academy itself, where his father and mother taught. The atmosphere in the independent private school was like a closed society. And the town itself was famous for several public organizations, similar to the Order of Freemasons.

After graduating from the Academy, Dan Brown continued his education at Amherst College in Massachusetts, where he was a member of Psi Upsilon fraternity. Brown completed his last year at the University of Seville in Spain where he chose linguistics. He received a bachelor degree in 1986.

The first years after graduation, Dan Brown was making a musical career. He wrote the lyrics and music for songs himself. Soon Brown's CDs were released, but the young singer had no success in giving concerts and tours, and he moved away from musical activity.

Dan Brown moved to Hollywood, closer to the place of many dreams, and got a job in the Beverly Hills Preparatory School. But after two years, in 1993, Brown returned to his native Exeter, where he taught languages.

The first page of Brown's creative biography was written in 1995. Dan wrote a comic book called 187 Men to Avoid: A Survival Guide for the Romantically Frustrated Woman. Later Brown called it a silly humorous book and was glad that the publishers had not printed it.

Brown's fascination with the history of religious orders and societies, the work of intelligence agencies and cryptography led to the writing of the second book and the first novel created in the genre of thriller. Digital Fortress is a work about secret work of specialized services and the thinnest border separating personal freedom and state security.

The idea of the novel came to Dan Brown when secret service agents visited the closed school. Presenting the certificate, they said that a Phillips Exeter's student was a threat to the state. The NSA found an e-mail with a threat to kill the president.

Dan Brown was interested in the details of electronic surveillance, intelligence gathering, and searching methods. The writer was so carried away by writing the novel that he got up no later than 4 in the morning and managed to compose a dozen pages before classes. He wrote the book in less than a year.

In 2000, he created the second conspiracy novel called Angels & Demons. Brown wrote it, mixing the genres of detective and thriller. The story of the creation was an accident. At the Vatican, the guide showed Dan and other excursionists the secret corridor of the residence, where the Patriarch of Rome could leave the room if his life was in danger. The guide called the Illuminati the worst enemies of the Vatican. Soon the novelist saw a rare folio of a Jesuit theologian, which described the secrets of the rite of the election of the Pope. The writer knew whom he would make a protagonist in a future book.

A year later, Dan Brown took to publishing an action-novel Deception Point, which raised the issue of the morality of politics.

The first three books did not bring the novelist fame, so Dan Brown had hopes for the fourth. The idea of The Da Vinci Code came to the writer during his studies in Spain. At the lecture on the history of art, the teacher, telling about the work of the genius Leonardo, drew the attention of students to inexplicable details on the canvases of the master, similar to the codes of messages. After the lecture, 21-year-old Brown, who since childhood had been passioned about puzzles and charades, felt a storm of emotions and a desire to unravel the "coding."

The Da Vinci Code was published in 2003 and sent shock waves throughout the country. On the first day, readers purchased 6 thousand copies of 230 thousand printed. Publishers responded to the unprecedented demand, translated the book into 40 languages and printed 81 million copies of the novel. The New York Times and The Wall Street Journal called The Da Vinci Code a book hit number 1.

After three years, the largest film company Columbia Pictures and Sony Pictures released a film adaptation of Brown's novel, investing in filming $125 million. The American writer, according to various estimates, earned from $250 to $300 million from the release of the movie.

The excitement of The Da Vinci Code aroused demand for the writer's previous novels. Publishers printed modest editions of Digital Fortress, Angels & Demons and Deception Point. Dan Brown earned $260 million on the publication of four detectives. In total, the writer has a net worth of $160 million.

It is noteworthy that in The Da Vinci Code can be traced the connection with the previous thriller Angels & Demons. The novels are connected by a common protagonist - Professor Robert Langdon. Some readers drew a parallel between Langdon and Harry Potter, calling the professor a grown-up character of the cult novel by Joanne Rowling.

Dan Brown gained worldwide recognition. The magazines like Time, People, New Yorker, and Forbes began interviewing the new star. But the novelist also had plenty of critics. Some skeptics called his novels pseudoscientific, and writers ridiculed Brown's style of writing. The famous English poet and editor Tom Chivers criticized the prose of the American, and scientists to the nines carried the claims of the novelist in the preface to his works that the basis of the detectives were historical facts. For example, in Angels & Demons, the author writes that Catholics burned Nicolaus Copernicus at stake, while the astronomer lived to old age and died of a stroke.

There are other inconsistencies and false statements that sound to the ears of educated readers. Dan Brown "buried" Raphael in the town of Urbino in Eastern Italy, while in reality the ashes of the artist always rested in the Roman Pantheon. The writer "introduced" Galileo Galilei in the occult order of the Illuminati, although the society appeared a century after the death of the Italian scientist.

In 2009, Dan Brown pleased the army of fans with a new novel called The Lost Symbol. The protagonist is the same Harvard Professor Langdon. On the first day, readers swept off the shelves of bookstores a million copies. The American publishing house Doubleday has printed 6.5 million books, beating the previous record of printing.

In May 2013, Dan Brown presented to the readers a detective novel Inferno. The plot of the book takes place in the twenty-first century, but the events are intertwined with the plot of the poem The Divine Comedy by Dante Alighieri. And again the main character of the novel is Robert Langdon.

Inferno is Dan Brown's third novel that has a film adaptation. The movie of the same name was released in 2016. The director Ron Howard entrusted the leading roles in the thriller to Tom Hanks and Felicity Jones.

There's a place for mystery and conspiracy in Brown's private life. The fact that the wife of the writer (Blythe Newlon) plays the first violin in the works of the novelist, the public learned at the trial in 2007. Brown was suspected of plagiarism, and the court ordered to disclose the details of working on novels. It turned out that the idea of The Da Vinci Code belongs to his wife. The writer's wife collects and systematizes the information used by her husband in his works. Moreover, she participates in the process of writing novels. Dan Brown admits that he is not very good at details, and the wife helps him.

Blythe Newlon was born in California. The couple met in Los Angeles when art historian and artist Blythe was 39 years old, and Dan was 27. That's all we know about Newlon's past.

After a setback in his music career, Dan Brown returned to Exeter with his girlfriend who is 12 years older. Brown and Newlon got married in 1997. The woman became a wife, a mother of two children and a colleague (some claim – the co-author) of Dan's bestsellers.

There are also those who call Blythe the author of novels, saying that she deliberately went into the background for selfish reasons as in the patriarchal world, more success belongs to the works written by men. But this is a rumor and speculation version. However, Dan Brown dedicates all the novels to his beloved wife.

The Brown family bought a plot of land in a remote area of Hampshire, in the woods. The house, built by spouses, looks like a fortress and is equipped with the latest alarm system.

In the autumn of 2017, the world saw a new novel by Dan Brown called Origin. The book belongs to the Robert Langdon series, and we can easily guess who the protagonist is.

The readers again could dive into the world of codes, secrets, scientific theories and get the answer to the oldest questions which do not give peace to humanity for thousands of years.