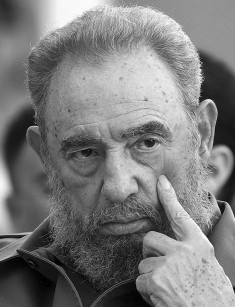 Politician Fidel Castro is a well-known comandante and a revered Cuban leader who ruled Cuba for more than half a century. There are many legends about his activities and life, which often contradict each other. It is difficult to give a specific characteristic to a "great and terrible" politician since one part of the world community considers him to be a people's ruler, but the other think of him as the most rigid dictator of humankind.

Fidel Castro’s biography is full of various events. He survived more than 600 assassination attempts, became the leader of the Cuban revolution and was the most terrible enemy of the United States, entering into a nuclear and economic union with the USSR.

Fidel Castro was born on August 13, 1926, in a small provincial town of Biran in Cuba in the family of a small landowner and a household servant. The parents of the future ruler were uneducated people, so they tried to provide their children with a decent education. Fidel was the best pupil in the school because, since childhood, he had an uncanny memory. In addition to his learning ability, Castro distinguished himself as an ambitious person, showing a revolutionary temper. At the age of 13, he already took part in the workers' revolt on his father's plantation, is one of its leaders.

In 1941, the future Cuban leader graduated with honors from high school and entered the privately funded school, where he gained a reputation as a vainglorious student and a participant of all scuffles. After school, Fidel Castro became a law student at the University of Havana. During his student years, he was especially fond of revolutionary books, which engendered a revolutionary spirit in his soul. At that time, he did not sympathize with the Communists, but he was ready to join their ranks if they would make him a leader like Stalin.

In 1950, Fidel Castro graduated as a Doctor of Law and founded a legal partnership, which catered for legal problems of poor people. The future comandante became a people's lawyer and provided legal services for free to the population, which won considerable support in society.

The beginning of Fidel Castro's political career has a revolutionary nature. At first, he became a member of the Party of the Cuban people and tried to make it into the parliament. But the first attempt was unsuccessful as his candidacy was not approved because of radicalism. Then he took more desperate steps and became the leader of fighters against dictatorship. In 1953 they conspired against the Cuban leader Fulgencio Batista.

This attempt to seize power also failed. As a result, many of Fidel Castro's comrades were killed, and the revolutionary was sentenced to 15 years' imprisonment.

Two years later, the future head of Cuba was amnestied and released from prison, where he stayed for 22 months. The released prisoner left the country and moved to Mexico, where he organized the revolutionary "26th of July Movement" in memory of the revolt against Batista. Many famous revolutionaries of the time such as Ernesto Che Guevara and brother of the future Cuban ruler Raul Castro joined the movement.

Fidel Castro's return to Cuba was life-changing for him and the Cuban people. He together with the insurgent army could capture Havana and overthrow the Batista regime and became the first Commander-in-Chief of the armed forces, and later Cuba's Prime Minister.

President of the Council of State of Cuba

For nearly 20 years of Fidel Castro’s reign, he completely changed the state. The country reached the flourishing economy and experienced an unprecedented rise for a short periodtime. The Cuban leader especially took care of social sphere, making medical care free for the population and increasing the level of education up to 98%. He also nationalized private enterprises and established the friendship with the USSR.

In 1962, the Soviet Union installed nuclear missiles on the island, which worsened the relations between the United States and Cuba. The West’s Hostility provoked the Caribbean crisis, and many of Castro's supporters fled the country and took sides with the Americans. Despite this, the Cuban leader continued to act to overthrow world capitalism, support foreign revolutionary movements in Angola, Afghanistan, South Yemen, Ethiopia, Syria, Algeria, Nicaragua, Libya and other third world countries.

Economic growth and stability in Cuba stopped in the early 1980's when the USSR ceased to provide financial support to the country. It led to an economic crisis. As a result, Cuba became the most impoverished country in the world. People tried to leave their homeland by any means and move to the USA, while in Cuba the opposition started organizing a movement to overthrow the Castro regime.

In 2006, for health reasons, the Cuban leader was forced to transfer his responsibilities to his brother Raul, who was elected to the presidency in 2008, as Fidel Castro was not in a physical condition to rule the country and lead the Cuban army.

Assassination attempts of Fidel Castro are the most widely discussed chapter in his biography. There is information that during the reign in Cuba and cooperation with the USSR, the American CIA attempted about 600 times to kill the Cuban leader. However, for unknown reasons, all attempts were aborted at the last moment and entirely suppressed by the special agents of the island. They tried to kill Castro during the underwater hunting, to shoot him with a pocket pistol fixed into the camera of a reporter and treated Castro’s favorite cigars with a lethal poison.

In 2006, Fidel Castro’s health deteriorated dramatically and became the national security information of the island. Despite this, the public was aware of the Cuban leader’s health problems after declassifying one of the reports of the American CIA.

Since 1998, Castro began to suffer from Parkinson's disease, which made him paranoid and jealous of famous people. A local doctor who escaped from Cuba said that the politician had rectal cancer and in 1989 he had an operation because of bleeding of the brain. As a result, the legendary Cuban comandante was "buried" in the media several times, but he suddenly appeared in public and disposed of widespread rumors about his death.

Fidel Castro’s personal life, as well as his health, is a secret topic in society. It is a well-known fact that three beloved women in his life gave birth to seven children, but only one son is legitimate. Fidel Castro’s first wife, Mirta Diaz-Balart, was the daughter of the Minister in the cabinet of Fulgencio Batista. She gave birth to the only legitimate heir, Fidelito, who was married to a Russian woman for some time.

Fidel Castro’s second wife was the legendary Havanan beautiful woman of the 1950's, Naty Revuelta, who gave birth to his daughter Alina. In her youth, the daughter of the Cuban leader immigrated from Cuba to the United States with a fake Spanish passport. According to Alina, Castro also had at least five children with his beloved woman, Dalia Soto. The third wife of the Cuban revolutionary Celia Sánchez was Castro's assistant for many years, but in 1985 she committed suicide.

In 2005, Fidel Castro’s fortune was $ 550 million, and a year later, it reached almost one billion. Therefore, according to the Forbes magazine, he became one of the wealthiest people on the planet. At the same time, the Cuban ruler denied his state enterprises income, but he loved luxury, as evidenced by his numerous yachts, residences and security guard. The extravagant politician did not spoil his children with much attention. He provided them only with food ration and security staffs.

Fidel Castro died at 22.29 on November 25, 2016 (06.29 Moscow time on November 26). The Cuban revolutionary died after a long illness. After death, Fidel Castro's body was cremated, according to his will. 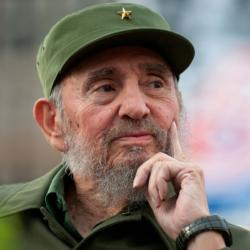