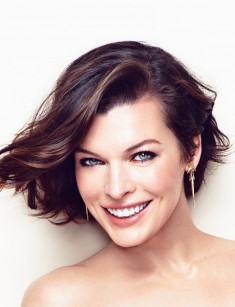 Milla Jovovich is an actress, who has ancestors from different countries. She was born in Ukraine, achieved love and recognition in Hollywood thanks to the efforts of the French director. By nationality, Jovovich is Russian and Serbian. The actress made an excellent career in music and modeling business: her photos are published in the most prestigious editions of the world fashion industry.

Milla was born on December 17, 1975, in Kiev. Her mother, Galina Loginova, was a famous Soviet actress. She married a simple Serbian doctor Bogich Jovovich. He came to the Ukrainian capital from Montenegro under the student exchange program.

The young family lived in Dnepropetrovsk, where the future Hollywood star went to the kindergarten. But those years were not very peaceful, and the Jovovich family was forced to leave the USSR. They lived in London for some time. The Soviet emigrants spent there only 7 months. Then they went to Los Angeles. The town became their new home.

Life in the US turned out to be very difficult for the young family. Frequent quarrels and difficulties put an end to this marriage. Bogich Jovovich soon got married. Milla has a little stepbrother Marco, whom she saw only a couple of times in her life.

Galina Loginova worked as a cleaner to make ends meet. She did not know the language and thus she could not get a better job. Because of her Soviet origin, employers didn’t want to work with the woman. In childhood and adolescence, Milla Jovovich also suffered because of her origin: classmates mocked her, calling her "Russian spy". She was a stranger at school, although she mastered English only for 3 months.

Her classmates’ cool attitude forced the girl to focus on the modeling career. But Galina Loginova understood that her daughter is an actress and sent her to the Professional School of Actors in California.

In adolescence, Milla was rebellious during her early teens: she was engaged in shopping mall vandalism and credit-card fraud. At the same time, her father Bogich was arrested for illegal operations with medical insurance. In one of her interviews, the movie star told that 5 years in prison had a positive impact on her father.

Once, Galina Loginova brought her 11-year-old daughter to the famous photographer Carlos Reinose. He admired the unusual beauty of the young Milla Jovovich so much that recommended her to the Prima agency. They signed a contract with the girl and made a photo shoot under the direction of Herb Ritts. In 1986, Jovovich appeared on the covers of the Italian magazine Lei and the London edition The Face.

She was noticed by the legendary photographer Richard Avedon, who invited the young model to shoot for the Mademoiselle magazine. The owners of the magazine banned the publication of the photo of Jovovich because the girl was only 11 years old. Avedon even wanted to refuse to work with the publishing house, if they did not publish Jovovich's photos.

This scandalous story had a very positive impact on Milla’s popularity. Her name and photos could be seen in the popular tabloids. For several months the problems of attracting young girls to show business were discussed, referring to the incident with the pictures of the young model.

Milla Jovovich signed two profitable contracts with the legendary Vogue and Cosmopolitan magazines. She became the face of many famous brands, from Revlon cosmetics to Christian Dior, Calvin Klein, and others.

In 2003, the legendary fashion designer Gianni Versace called Jovovich his "favorite supermodel". And a year later Forbes placed the girl's name on the list of the world's richest models.

Milla is 1.74 meters. She is still in excellent physical form and from time to time she accepts offers to appear in photo shoots for fashion magazines.

The world fame in modeling business opened for Milla the door to Hollywood. At the age of 13, she made her debut in the movie “The Night Train to Kathmandu”. Thus her acting career began. In the same year, the film "Two Moon Junction" by Zalman King was released, where the actress played the role of Samantha Delongpre.

A real breakthrough in the movie for Jovovich was the sensational American drama "Return to the Blue Lagoon," in which she played Lilly, the main character of the film. Under the scenario, she had to appear naked.

The actress became successful with a scandalous aftertaste. In 1991, Milla Jovovich was nominated as "Best Young Actress Starring in a Motion Picture" and "The Worst New Star" at the Golden Raspberry Award. After starring in the comedy "Dazed and Confused," the girl was discouraged and decided to move to Europe, where she started the music.

The actress returned to acting and it was truly impressive. In Europe, Milla Jovovich met the director Luc Besson. He was looking for an actress in his new film "The Fifth Element." Among the three hundred other actors for the role of Lillu, he chose Jovovich, who later helped Besson to create a new language for her heroine. "Divine Language" consisted of only 400 words. But it was enough to communicate with the director.

The partner on the set of Milla was a cult actor and Hollywood star Bruce Willis as well as the legendary Gary Oldman. For the sake of her role Milla Jovovich completely refused to perform on stage, go to clubs and other joys of life, concentrating on work. As a result, "The Fifth Element" brought her world fame and the status of a star.

Milla Jovovich received many nominations as well as criticism. James Berardinelli called her game "Jovovich makes an impression, although her effectiveness has little to do with acting and less to do with dialogue."

Further cooperation with the director Besson was less successful. The actress played the role of Joan of Arc in the eponymous film of the same name. Six months before the filming began, it became known that another actress was approved for the role of Joan and the director left the project. After the trial in connection with the failure to fulfill the terms of the contract Besson rewrote the scenario and began work on his version of the picture called “The Messenger”. For her role Milla Jovovich was again nominated for the "Golden Raspberry" but she was lucky to play with such stars as Dustin Hoffman, John Malkovich, and Vincent Cassel.

One of the most successful films with the participation of Jovovich was the film "Resident Evil" based on the computer game of the same name. It was released in 2002. Milla Jovovich was a longtime fan of the game and, learning about the upcoming shootings, said that she is the only actress worthy to star in this film.

To play Alice, Milla Jovovich spent a lot of time studying martial arts. Almost all the tricks in the film she performed on her own. The fantastic horror film "Resident Evil" was released in 2002 and immediately gained commercial success. Its fees exceeded the budget many times over. For this work, the star was nominated for the Saturn Award as the best actress.

In 2005, Milla Jovovich starred in the sensational American-Italian project by Francesco Vezzoli "Caligula". She appeared along with her famous colleagues as Helen Mirren, Benicio del Toro, and Gerard Butler.

Then, Milla Jovovich appeared in several sequels "Resident Evil", which was warmly received by the audience in the world box office.

The actress continued her cooperation with the director Paul Anderson. In 2011, she appeared in the adventure film based on the works of Alexandre Dumas "The Three Musketeers." Milla Jovovich played the role of the insidious Milady de Winter, who, together with Duke of Buckingham (Orlando Bloom), confronts the main characters.

Despite the very cool reviews of critics, the film was successful. The famous director Quentin Tarantino even put it on his list of the best films of 2011.

Milla Jovovich also starred in Russian films. In 2010, the comedy "Freaks" was released, in which the actress appeared with Ivan Urgant and Konstantin Khabensky. To promote the project, the Hollywood star took part in the humorous TV show "Prozhektorperiskhilton".

In 1988, Milla Jovovich sent her demos to SBK Records studio and signed a contract with them. But because of a very busy schedule, her first album called The Divine Comedy was released only in 1994.

Recording the debut album, Jovovich was inspired by Ukrainian folk music, as well as musical works based on the "Divine Comedy". The album was highly appreciated by critics and warmly received by music lovers, which allowed the singer to continue working in this direction. In 1998, Milla Jovovich published her second album, The People Tree Sessions.

A year later, the singer, together with the musician Chris Brenner, founded the experimental group Plastic Has Memory, in which she worked not only as a vocalist but also wrote lyrics for new songs and played electric guitar. The team took part in many shows but never recorded a full-length album.

The personal life of Milla Jovovich in many ways is connected with her career in the cinema. For some time she was married to her colleague in the film "Dazed and Confused" by Sean Andrews but their relationship was short. The marriage was annulled by her mother two months later.

After "The Fifth Element" Milla impressed the French director Luc Besson, who after the premiere offered her to become his wife. They played the wedding in 1997, but 2 years later they divorced.

For a long time, there were only rumors and gossip about the personal life of the Hollywood star. They stopped after she met the director Paul Anderson in 2002. In 2007, their daughter Ever Gabo was born.

The parents of a small Ever decided to get married only in 2009. In 2015, the second daughter Dashiel Edan was born. Milla Jovovich gave birth to a baby at the age of 40.

The couple lives in Los Angeles and brings up children together, trying to give them as much time as possible.

Today, the American-Russian star, beloved by millions, is happy in her personal life as well as in profession. In 2016, the paparazzi took a picture of the whole family. Milla Jovovich, her husband, children and two pets were walking together. She had a stressful shooting season as well she starred in the new film "Shock and Awe: The Story of Electricity", in which she starred along with Alec Baldwin, Jessica Biel, and Tommy Lee Jones. The filming of the project took place in New Orleans, so the star for a long time was forced to leave the family.

In December 2016, Milla Jovovich visited Tokyo at the premiere of the new film "Resident Evil: The Final Chapter". At the premiere, the actress came not alone but along with her beautiful daughter Ever Gabo and her husband Paul Anderson. The premiere was especially memorable for the 9-year-old Ever since in the final part of the "Resident Evil" she played her first role in the cinema.

In February 2017, Milla Jovovich visited the show "Evening Urgant", where she told about the last series of "Resident Evil", how to raise a child when you are shooting a movie about zombies, and what hobby turns her into a real Russian wife.

The actress speaks Russian and is proud of her Slavic origin. "The most Russian American actress," as Milla is often called, regularly posts fresh pictures on the Instagram, which has 1.8 million subscribers. 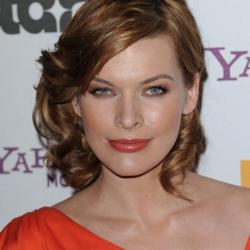