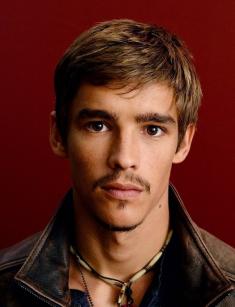 Unfortunately, there are unknown facts in the biography of Brenton Thwaites. The actor has not told the details of his childhood and youth in interviews.

It is known that the young man grew up in sunny Australia in Queensland. He was born on August 10, 1989, in the tourist town of Cairns, located at the bottom of the mountain. The place has a lot of sights, humid tropics, and sandy beaches on the coast of the Coral Sea. The boy was often in the open air, sunbathed and liked surfing. He did not depend on gadgets or computer games and preferred to spend time with friends outside.

Thwaites grew up with his sister Stacey. His father's name is Peter, and his mother is Fiona. It is unknown where the parents of the actor worked.

According to Brenton, he was a creative child, but all the same, dreamed of the heroic work of a firefighter or police officer. The boy could make adults laugh telling funny stories and loved to shoot short films using his father's old camera, but he thought that it was just a hobby. One day Brenton desired to conquer the cinema. At one point he realized that only the film industry could allow a person to take on the role of one or another character and also experience someone else’s fate.

When the young man was 16 years old, he made his acting debut on the theater stage in the classic production of Shakespeare's play Romeo and Juliet. According to the man, the first acting experience was not easy for him. Brenton was worried so much that a few minutes before the play he had begun to feel nauseous, and he forgot his lines completely. However, during the performance, the guy picked up his spirit, became confident in front of the audience, and later began to feel at ease.

Therefore, after graduation from school, Thwaites did not hesitate and entered the Queensland University of Technology to study acting. During his studies, Brenton managed to play a bit part in the independent film Charge Over You (2010), but the little-known project did not make the young actor famous.

Although Brenton Thwaites does not have many projects in his filmography unlike other Hollywood stars, the actor has appeared in quite remarkable films that became popular with both Western and Russian viewers.

At the beginning of his acting career, the brown-eyed man took part in the famous TV series Sea Patrol (2007-2011), in which he got a bit part. In 2010-2011, Thwaites portrayed Stu Henderson in the Australian longest-running and most ambiguous soap opera Home and Away, which premiered in 1988.

In 2011, Brenton played Luke Gallagher in the series Slide, which told about the life of ordinary 17-year-old teenagers. This multipart film is still popular with young people, some of them even draw an analogy with the excellent TV series Skins.

In 2012, director Mikael Salomon delighted movie lovers with a remake of The Blue Lagoon, in which Thwaites played the leading role of handsome Dean. In the adventure story, Dean and Emmaline (Indiana Evans) were left alone on an uninhabited island in the Caribbean where they tried to survive for a hundred days.

Brenton proved that he could play not only in romantic dramas and comedy series. In 2013, he appeared in Oculus, one of Mike Flanagan's most exciting horror films. The guy got into a character and showed anger, fear, and despair brilliantly.

The plot focuses on the sinister mirror, which supernaturally induced hallucinations. Software engineer Alan Russell brought the antique to the new house, after which strange and scary things happened in the family.

In the mystical film, the actor played Tim Russell, who was in a psychiatric hospital after the death of his parents. He and his sister Kaylie (Karen Gillan) vowed to destroy the mirror that caused many troubles.

In 2013, Thwaites portrayed the title character in the film Son of a Gun directed by Julius Avery. In the action movie, the handsome guy played a skinhead gangster who craved for a giant gold heist but changed his views after meeting his lover.

Brenton worked on the same set with Ewan McGregor, Alicia Vikander, Matt Flannagan and other famous actors. According to rumors, the tall man (his height is 6.13 ft. (187 cm)) had to audition ten times to get the cherished role.

In 2014, Thwaites starred in the family film Maleficent, a new adaptation of Charles Perrault's original fairy tale, Sleeping Beauty. In this film, the young man played the role of Prince Phillip, and Angelina Jolie played the main villain.

The young actor does not like to open up about his personal life. It is known that after filming in Blue Lagoon: The Awakening, Dean and Emmaline's on-screen love turned into real feelings. Brenton began dating his colleague on the set, Indiana Evans. However, a month later, their relationship failed.

When the man broke up with the blonde, the paparazzi did not see the actor with a new girlfriend for a long time. Therefore, the media representatives who craved for sensations began to spread rumors about Brenton’s non-traditional sexual orientation.

But Thwaites dispelled these rumors, as it soon transpired that his girlfriend was Chloe Pacey. The lovers live in a common-law relationship, and in 2016 the actor became a father when his lovely daughter Birdie was born.

In 2016, Brenton Thwaites got the leading role of thief Bek in Alex Proyas’s fantasy film Gods of Egypt. His colleagues were Geoffrey Rush, Gerard Butler, Nikolaj Coster-Waldau, Élodie Yung and others.

In 2017, the actor pleased sophisticated screen fans with the leading role in the film Pirates of the Caribbean: Dead Men Tell No Tales. In the adventure film, Thwaites played Henry Turner, the son of Will (Orlando Bloom) and Elizabeth (Keira Knightley). Charming Kaya Scodelario also appeared in this film.

The actor has also performed remarkable roles in several movies that are in post-production status: An Interview with God, Office Uprising, and Ghosts of War. The actor posts interesting photos and videos of filming on his Instagram page.

Brenton Thwaites net worth is $8 million.