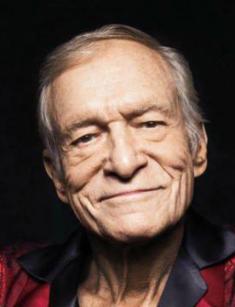 Hugh Hefner is an American journalist, publisher and founder of the popular magazine Playboy and just a lover of beautiful women, who began a new era of the sexual revolution in the world of media.

Hugh Hefner was born on April 9, 1926, in the cultural capital of the Midwest, in the famous city Chicago, located in Illinois. According to rumors, Hugh is the cousin of the former United States President George Walker Bush.

We cannot say that Hefner had a happy childhood: the boy grew up and was brought up in the average and strict family. It is ironic that the parents of the well-known publisher were Grace Caroline Swanson and Glenn Lucius Hefner, who adhered to the harsh of manners, which were written in the Protestant religion.

For example, Puritans led a reclusive life, limited their needs, worked hard and condemned intimate relationships, believing that intimacy between a man and a woman is needed only for the continuation of the human race. Hefner recalled that the family had a taboo on cigarettes and alcoholic beverages because his mom and dad said the only phrase: "God wants it!".

Hef (he had this nickname as he was a child) admitted that his father`s love to God was so great that the man even turned for advice to the local pastor for the smallest household matters. It is not a surprise that the God-fearing husband and wife raised the future creator of Playboy according to religious rules. They controlled every step of their firstborn, trying to promote the boy's selfless and ascetic life. His parents forbade to make friends because they believed that new acquaintances do not lead to anything good.

Therefore, when the neighborhood boys played in the yard from morning till evening, young Hugh watched them through the window and dreamed of spending at least a day without any strict adult supervision. Also, Hefner was forbidden to go to the movies, as, according to Glenn and Grace, the passion for films was a sin although the ethical code acted in the American film industry at that time, according to which those movies were impermissible, which undermined the moral foundations of the audience.

Young Hefner read a lot of books, which saved him from the monotonous boredom. He studied the works of the school program but the boy could carry the book Haunt of Horror: Edgar Allan Poe secretly from his parents, which made a lasting impression on him. When Hef got older, he studied the works of Alfred Kinsey and Sigmund Freud.

It is well known that Hugh attended Chicago high school. His teachers immediately noticed the guy's love of literature and his writing talent, so they predicted the journalistic future. However, it was difficult for him to study the exact science because of his lack of diligence and perseverance.

After graduating from high school in 1944, the future publisher joined the army, where he worked as a war correspondent. He realized there that postcards with half-naked women are popular with soldiers. Hefner studied the University of Illinois at Urbana–Champaign after his service.

Hefner had an interest in publishing in his student years. Then he had the idea of Playboy Magazine. Hugh managed to earn extra money in the magazine Shaft, in the local art studio and even published his satirical comic book That Town Toddlin, which tells about the life of large and noisy Chicago. But the creative profession of the comic book quickly bored the guy, so he got a job as an advertising manager in a local company for the production of plastic containers.

Later, in the winter of 1951, Hugh was the editor of the department of the famous men's magazine Esquire, which tells the readers about business, politics, fashion, etc. But Hefner had to give up a career in this publication because he received a sharp refusal on the request for a salary increase. Hugh resigned from the post of an editor and began to make his dream true, the creation of "Playboy" after unsuccessful negotiations with the chief of Esquire.

Playboy is a men's magazine, published by Hugh Hefner and his colleagues since 1953. The edition with naked beauties, fictional articles and sensational photos of Hollywood stars is very popular in many countries to this day. The word "playboy" has become a household word for the ladies ' man and designers around the world widely use the permanent rabbit logo with a bow tie.

Few people know that the way of Hugh Hefner was long and thorny to the periodic publication of his magazine. Hef worked in the bank, where he received $ 600 and he borrowed $ 9000 from investors and from his mother to realize his dream.

It is well known that he originally wanted to name his magazine Stag Party but he long thought what kind of girl will adorn the cover of glossy magazines. But he saw an old army postcard with naked Marilyn Monroe, who seemed to wink at him from the picture.

Hugh came up with a new name of the magazine - Playboy, inspired by the beauty of the famous blonde and the black and white photo of Monroe began to decorate the cover of the debut edition. Hugh wasn't sure that his publication will be censored and will have a success of the male audience before the circulation of the first issue of "Playboy" magazine (70,000 copies). Therefore, Hefner did not number the debut issue, strongly doubting about the next issue.

But there was the success of Playboy: there was sold a quarter of the circulation in the first week. Thus, the era of "a sexual revolution" came in the media. Hefner never considered Playboy a magazine about sex because the publication with the rabbit was radically different from the pornographic press of Hustler, Penthouse and Screw.

Erotica was only a beautiful wrapper for Playboy Magazine: both fiction and interviews appeared on the pages of glossy magazines and the severe topics were discussed, for example, the articles were published, where Martin Luther King Jr talked about the problems of segregation in America and Fidel Castro spoke about the revolutionary struggle.

Also, short stories of writers: Vladimir Nabokov, Stanislaw Lem, Stephen King and other literary figures were published in the columns of Playboy. It's no secret that the star beauties appeared before readers "in all glory" on the pages. They were Elizabeth Taylor, Pamela Anderson, Cindy Crawford and many other lovely ladies.

Williams gave the journalist two children: the daughter Christie was born in 1952 and the son David Paul in 1955. In 1959, Hefner's family idyll collapsed and Millie, taking her son and daughter, filed for divorce, saying that the publisher of Playboy was a domestic rapist and tyrant.

Hugh lived the life of a desirable bachelor and had promiscuous sex for 30 years after parting with Williams. In 1989, he married the model Kimberley Conrad. They were together for about ten years. Since 2000, he lives in a large cottage with seven beautiful girls, arranging loud parties.

In the winter of 2010, it was known that Hugh prepared for the wedding with blonde Crystal Harris but Hefner said on Twitter that Crystal changed her mind shortly before the celebration. But in 2012, the 86-year-old man married the 26-year-old woman.

The chief editor of "Playboy," Corey Johnson offered to modernize the publication to remove completely naked girls from the glossy pages to increase the audience. But in 2017, the magazine returned to its original image.

Hefner continued to enjoy life in the mansion with his wife Crystal and arranged noisy parties despite his advanced age. It is known that Hugh was an active user of Instagram, you can see various photos of old times and weekdays on his official page. Also, in 2017, the documentary series American Playboy: The Hugh Hefner Story was released, telling how the millionaire made his fortune.

On September 28, Hugh Hefner died at the age of 92. A well-known publisher died in his home. He was surrounded by his native people. Hugh Hefner had a net worth of $50 million at the time of his death in September 2017.