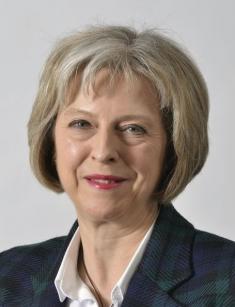 Theresa May is the new Iron Lady of the United Kingdom, who has become Britain's second female Prime Minister after Margaret Thatcher. She is known for her heavy-handed policy which helped the woman to build a successful political career and gain the support of the British people during national changes associated with the UK's withdrawal from the EU.

Theresa Mary May (née Brasier) was born on October 1, 1956, in Eastbourne, Sussex, in the family of priest Hubert Brasier. She attended two schools, a state school and Roman Catholic independent school, where she graduated with honors. Upon graduation, the future politician entered the University of Oxford where she read geography, graduating with a bachelor's degree in 1977.

Theresa May began her career at the Bank of England, where she worked as a financial consultant. After almost ten years, the career of the future politician took off when she began to work at the Association for Payment Clearing Services. There she made her way from a simple analyst to a senior advisor in International Affairs.

Theresa May began her political career in the early 1980s. For several years, the future Prime Minister of the United Kingdom managed to develop the image of a politician. She served as a councilor for Durnsford ward on the London Borough of Merton, where she was Chairman of Education.

In 1992, Theresa May began to participate in the general elections. However, she stood several times unsuccessfully and was elected to sit in the House of Commons only in 1997. Then, she held various minor positions in the conservative government, and in 2002 she was appointed the first female Chairman of the Conservative Party.

Being involved in the technical supply of the Conservatives party, the future Prime Minister of the United Kingdom was also appointed Shadow Secretary of State for Transport and Food, and later for Sport, Media, Culture, Pensions, and Work. In 2005, May was made Shadow Leader of the House of Commons, and she held this position until 2010.

When David Cameron became Prime Minister of the United Kingdom, Theresa May was appointed Home Secretary and Minister for Women and Equality. As Home Secretary, she proved herself to be a tough and cold-blooded politician, advocating the invasion of Iraq, granting same-sex couples equal rights.

Besides, Theresa May was one of the few political opponents of the further European integration and actions on climate change, and also opposed the restriction on smoking in public places.

Prime Minister of the United Kingdom

Theresa May reached the political stardom after the European Union membership referendum. She opposed Brexit and supported Cameron, who was personally critical of changes in the country. Nevertheless, after the resignation of Cameron, she decided to run for the leadership of the Conservative Party and announced her candidacy for Prime Minister of the United Kingdom.

On July 13, 2016, Theresa May was appointed Prime Minister by Queen Elizabeth II. As Prime Minister, the politician promised to continue David Cameron’s policy in the country and preserve the unity of the United Kingdom, restoring social justice in the country.

Her election campaign had taken place before the famous Brexit referendum (British withdrawal from the European Union). As a result, the Euro-skeptics won, and Theresa May submitted to the popular will and launched the exit from the EU.

On March 29, 2017, Donald Tusk, President of the European Council, received an official letter in which the United Kingdom notified the European Union that it was no longer part of it. Besides, Britain demanded to return its share of profits (from $ 9 billion to $ 10 billion) from the European Investment Bank.

Theresa May's personal life is as successful as her political career. In 1980, she met the love of her life, Philip John May. The new Prime Minister has been married to her husband for over 35 years, although the couple has no children.

It is known that Theresa May has health problems. In 2012, she was diagnosed with diabetes mellitus of type 1, which is treated with daily insulin injections.

The British media call Theresa May the most glamorous politician of the House of Commons because of her love for designer clothes and shoes. The fashionable outfits of this slim woman (the height of the Prime Minister is 5.34 ft. (163 cm)) have been repeatedly subjected to criticism. People consider it inappropriate for the politician to wear plunge dresses at business events.

In April 2017, Theresa May announced plans to call a snap general election in the UK in June. The Prime Minister justified this decision saying that the UK’s withdrawal from the European Union was a complicated procedure that would require a strong and well-organized government that shared the same vision of Brexit. At that time, she appointed several of the most prominent advocates of Brexit to key Cabinet positions, including Boris Johnson as Foreign Secretary, and David Davis as Brexit Secretary.

The British Prime Minister delivered the party conference speech and reminded people that the country would face a struggle not only for names and agreements but for control of national borders, currency, laws, and economical choice.

So, Theresa May was reelected MP. Moreover, partial election results put the Conservative Party in the lead. However, in the end, no single party has won a parliamentary majority, and the Conservatives won only a little more than 50% of seats.

This situation led to a hung parliament. Theresa May had to ask for permission to form a new cabinet, which turned into a difficult coalition government. In 2017 there were even rumors about the imminent resignation of the Prime Minister, but this information was not confirmed.

After confirming the withdrawal from the European Union, the UK began to establish relations with both members of the EU and other countries. The Prime Minister became the first foreign leader to pay an official visit to the USA after Donald Trump had taken office.

In February 2018, Theresa May visited China to meet Xi Jinping. The Prime Minister told the press that the “golden era” of UK–China relations had begun.

In February 2018, May also met Angela Merkel, Chancellor of Germany. The main topic of the talks was the withdrawal of the UK from the EU, which was a point of concern for the Europeans and British. Moreover, the leaders discussed security issues as well as selling arrangements.

Nowadays, Theresa May has an estimated net worth of $2.5 million. Although she has become one of the most famous Prime Ministers, Theresa May has failed to deliver a workable Brexit and has an approval rating of just 33%.