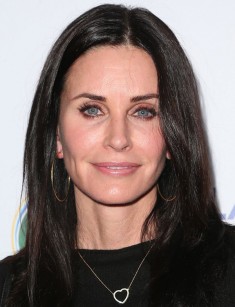 Courteney Cox is a famous American actress, TV host, producer, model who became popular due to her roles in the series "Friends" and in the Hollywood horror movie "Scream".

Courteney Cox was born in the family of a housewife Courteney Bass (the younger daughter was called in honor of her mother) and a businessman Richard Cox. The childhood of the girl who had two elder brothers and a sister passed in a small southern town of Birmingham. When she turned ten years, her parents divorced. Richard had gone to Florida, and her mother got married for the second time to the businessman Hunter Copeland.

The new marriage of her mother brought Courteney not only a wealthy stepfather but also nine whole stepbrothers and sisters (Hunter's children from his first marriage). Later the actress remembered that for long years she had been blaming her mother for parting with her father. And only when she became adult she understood that her parents didn’t match each other completely, though they had lived for whole nineteen years of marriage.

Courteney finished a secondary school in Alabama and she managed not only to study well, but also she had a fancy for sport. The girl played big tennis, went in for swimming and was a member of school team of cheerleaders. Afterward, her previous sports training resulted to be of great help in her career of a model and an actress, but at that time Courteney didn't even think of it.

After school, the girl entered Mount Vernon College at the local university in Washington. She dreamed to become an interior designer and she had been studying at the relevant faculty for the whole year. However, life had other plans for her. According to some information, in youth, Courteney began to meet her stepfather's nephew, Miles Copeland.

Friends of the young man worked in the model business and persuaded Courteney to try herself in this sphere. Soon a young beauty signed the contract with the model agency "Ford" and left the university. Having left her dreams of designing career, the girl signed up for drama courses to get rid of her characteristic southern accent which had been disturbing her in work. In such a way model business became for Courteney Cox a peculiar bridge, a step to her future popularity.

A young aspiring actress didn't become famous at once. After shootings in various commercials, she had danced in the song video by Bruce Springsteen. Then Courteney began to be invited to play supporting roles in movies and TV series, she also had worked as a TV host.

The role in the comedy "Ace Ventura: Pet Detective" became the most significant role at the beginning of Courteney’s career. In this picture, a famous actor Jim Carrey became her partner. After the movie had been released in 1994 she finally got her dream ticket: she was invited to audition on NBC channel which was launching the new series "Friends" at that time. At first Courteney was auditioned for Rachel's role, but finally, directors considered Jennifer Aniston for this role and Cox received none the less vivid character of Monica Geller.

The actress didn't leave series for the next ten years and had been playing her role in all seasons. The actress took part in this series in a company of Jennifer Aniston, with whom they became close friends and together with Lisa Kudrow, Matt LeBlanc, Matthew Perry and David Schwimmer. This series and its participants have been nominated for Emmy Awards and for the Golden Globe. Unfortunately, Courteney didn't receive awards, but she and other actresses of this series were included in the Guinness Book of Records as the "highest-paid" television actresses.

After "Friends" Courteney Cox got her next most significant role of Gale Weathers in every of four parts of the horror movie "Scream" which were released with breaks in several years, from 1996 till 2011. Right during shootings of the first part of the movie "Scream", Courteney got acquainted with David Arquette, a former wrestler, and actor with whom they were bound together by love and collaboration.

After the last release of the picture "Scream" Courteney was invited to play Susan's role in the series "Desperate Housewives", but her pregnancy prevented her from taking this job. Then she took part in a great number of various pictures, series and she also had got an experience as a producer (together with her spouse David Arquette). In 2001 she appeared in "3000 miles to Graceland" in a company of Kevin Costner and Kurt Russell, in "The Longest Yard" (2005) and "Bedtime stories" (2008) with Adam Sandler and in other movies.

Courteney Cox was said to have love affairs with many men. In youth, she had been dating with Adam Duritz and Michael Keaton, but she met her true love during the shootings of cult "horror", where she met a charming guy, who played the role of a modest, but nice sheriff. In 1999 David Arquette and Courteney Cox got married, and in 2004 they gave birth to their only daughter, Koko Riley. The best friend of Courteney - Jennifer Aniston became the godmother of their baby.

Unfortunately, the couple broke up in 2010 though they officially divorced only in 2013. By rumors, they separated because of constant quarrels caused by unsuccessful attempts of the spouses to have kids. However, it was not surprising, that Courteney got nervous sometimes and made scenes. It is known for a fact that during the years of their marriage this fragile beautiful woman had had eight miscarriages.

For the first time, this misfortune happened with her before the daughter's birth. Then the couple kept trying to have more children. However the organism of the forty-year-old woman didn't cope with this objective, and she had seven more miscarriages.

After the divorce Courteney got herself together quite in a short time, she didn't stop acting and in 2014 actress announced about her engagement with the musician Johnny McDaid with whom they had been dating since 2013. It is said that hard character of actress became the reason for their separation.

A year later after the break-up with Johnny, Courteney was captured together with Matthew Perry – her partner in the series "Friends". Her fans are happy for her and hope for the best though actors claim that they are just friends. In January 2017 there was information at the press about Courteney's reunion with her former groom: the actress decided to move to London to live with McDaid together with her teenage daughter.

Today Courteney Cox still plays roles in movies and also works as a producer and director. So, in 2016 she took part in the TV picture "Charity Case" and in the movie "Mothers and Daughters". 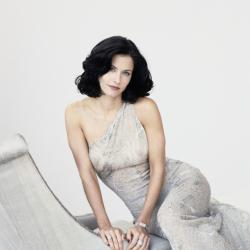