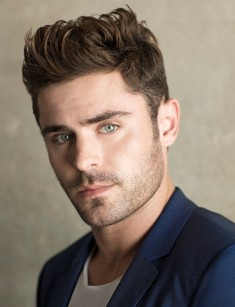 Zac Efron is a Hollywood actor whose has become especially famous after the release of the Disney movie series High School Musical and the comedies Hairspray, 17 Again and Dirty Grandpa.

Zac Efron (his full name is Zachary David Alexander "Zac" Efron) was born in October 1987 in the family of an engineer of the power plant David Efron and a housewife Starla Baskett. Zachary’s parents are of Jewish origin.

When Zac turned six, and his younger brother Dylan was one year old, the family of Efrons moved from the Californian town San Luis Obispo to the small town - Arroyo Grande, which is situated in three hours from the well-known "dream factory" in Los Angeles.

As well as all his peers, Zac kicked the ball and attended regular school. It was the boy’s singing talent, which distinguished him from the peers: Zachary sang some simple songs that he invented all over the world. In such a way he made his relatives lose their temper. In the end, his parents decided to develop their son's musical skills and took him to the music school.

Zac Efron began to perform on the stage when he turned four. He played small roles in the school plays. And when Zac turned eleven years old, he passed the audition and performed in the play called Gypsy, which was staged at Arroyo Grande Theater. The show Gypsy was shown 90 times. The same amount of times the young actor appeared on the stage in the costume of a gypsy. In such a way Zac Efron began his acting career.

At the age of eleven, the teenager attended the musical school of Allan Hancock Theater College in Santa Monica for a year. At that time Zac, at last, fell in love with the stage and the laughter and applause of the spectators. Zac and Dylan Efrons have become the irreplaceable members of the school theater company. Zachary was entrusted with more and more difficult and responsible roles, and each time he did his best in the undertaken tasks. Zac was especially successful in the part of Peter Pan – a young boy who never became adult from the magical Neverland. Later, Efron admitted that it was his favorite role, which he would perform with great pleasure not only on the stage but the screen as well.

When Zac Efron was fifteen years old, he together with his mother moved to Los Angeles, where he tried his luck visiting the auditions. His efforts turned out to be successful: the guy received several episodic roles in the high- rating series CSI: Miami, Firefly and ER.

And in 2004, Zac who was seventeen years old was noticed by the famous producer Harry Wainer. He invited Efron to join the permanent cast of the multi-series family movie Summerland. In the first season of this saga, the young actor performed a supporting role, but in the second he already appeared on the screen more and more often. Zac discovered surfing for himself during the shootings on the coast of the ocean. Later, he began to be fond of it.

After the family saga, Summerland had come out on the screen Zac Efron became famous, recognizable and demanded actor. After the shootings in this series, the actor received the invitation to play a significant role in the movie High School Musical, where Efron performed the character of Troy Bolton. This musical has brought real recognition and fame to the young actor. In this movie, he played together with the beautiful actresses Vanessa Hudgens and Ashley Tisdale. The teenagers liked this trio so much that the director Kenny Ortega soon shot two more parts of the movie under the titles High School Musical 2 and High School Musical 3: Senior Year.

During this period, Zac finished the high school and later continued his education at the University of Southern California. Though, because of his busy working schedule, he had to postpone his studies.

The famous movie critics note this well-known young actor and find flattering words for him. The youth audience likes him so much that Zac Efron’s name has risen to the second place in the searchers being ahead of the popular program American Idol. The boy received the prestigious Choice of teenagers-2005 Awards.

After the High School Musical Zac Efron received the invitation from Adam Shankman to take part in the new musical Hairspray. He got the role of Link Larkin. The young actor worked on the movie set together with such great Hollywood stars, as Michelle Pfeiffer and John Travolta. To get the role of Link Efron left behind 2,000 young colleagues.

Since 2007 till 2012, the actor performed remarkable roles in the following movies – 17 Again, Charlie St. Cloud, New Year's Eve, The Lucky One and The Paperboy. For his role in the melodrama, The Lucky One directed by Scott Hicks Zac Efron received three prestigious Teen Choice Awards at once. The actor got two more same awards for his role in the comedy 17 Again.

The thriller Paperman has received positive feedback and high ratings from the spectators. For the role in this picture, Zac Efron for the first time was nominated for the Golden Palm Awards in Cannes. The same year 2012, the spectators saw the drama At Any Price directed by Ramin Bahrani. This is a story about the father who wants to leave the family business to his son. But the guy doesn’t have a desire to get engaged in this business and dreams about the racing career. Zac Efron plays the role of the son. The picture was nominated for the Golden Lion in Venice.

The critics have unanimously recognized that the actor was very talented and also was prospective in his career. That’s because he can play versatile roles.

His roles in the in the popular comedies This Awkward Moment, Dirty Grandpa and the youth drama We Are Your Friends became the latest remarkable roles of Zac Efron.

The comedy Dirty Grandpa was released in 2016 and in a short time conquered the attention of the audience. It’s not surprising because Zac Efron and Robert De Niro received the leading roles and performed the characters of grandson and grandfather.

The admirers of Efron’s acting talent love him not only for movies but also for excellent vocal skills. Zac Efron has recorded some well-known soundtracks for the movies.

In 2007, the actor and singer recorded his first successful song for the musical Hairspray. Later, Efron has sung eight more songs for the series High School Musical 2. These songs turned out to be successful at melomaniacs, and Efron had to record ten new compositions for the musical's third part. One of the soundtracks has even occupied the fifth position in TOP-40 popular singles. There were sold approximately four million copies.

The song, which Zac Efron performed together with the actress Vanessa Hudgens became especially popular and entered the fourth position of the Billboard chart.

At present, the Hollywood star is at the peak of his popularity and regularly delights the army of his devoted admirers with the new movies. In 2016, the pictures Mike and Dave Need Wedding Dates and Neighbors came out on the screen. The last film is particularly popular, because except for Efron young Hollywood stars Chloe Grace Moretz, Seth Rogen, and Rose Byrne took part in this movie. Moreover, Zac Efron has demonstrated his excellent body in this project.

After the picture Dirty Grandpa, the young man has put on some kilos and has worked well on his body: due to persistent training his body has become more shaped. The admirers of the star have become interested in his system of training and type of nutrition, having a desire to obtain the same sexy and sports figure.

And in 2017, when the adventure movie Baywatch came out on the screens, there increased the attention to Zac Efron’s appearance. The actor has achieved stunning results and has demonstrated his perfect body on the screens. The American comedy will be premiered in Russia in May 2017.

The celebrity’s admirers note the surprising similarity of Zac with his Canadian colleague Kevin Zegers, known due to his roles in the movies Dawn of the Dead and Transamerica.

Zac Efron occupied the 92nd position in Forbes Celebrity 100 list in 2008. His income amounts to 5.8 million dollars. The People magazine has recognized Zac as the most handsome actor. Rolling Stone magazine has joined to this opinion and published the article under the title "The New American Heartbreaker Zac Efron."

It's not surprising that Zac Efron's personal life is saturated and full of events. Famous beautiful girls are always next to the well-known American macho. The love affair of Zac Efron and the actress Vanessa Hudgens turned out to be the longest one. They got acquainted on the movie set of the first part of High School Musical and have been together for five years. They were called the most beautiful Hollywood couple, but in 2010 their relationship came to an end.

In a short time after the break-up, the actor was noticed in one of the Hollywood's nightclubs together with the charming Teresa Palmer. The couple was resting sitting at the VIP table in a "company" of a jag of tequila. They showed true passion. But, as it became obvious later, it was just a fling which didn’t last for long.

In 2011, the beautiful Selena Gomez confessed to the journalists that she had sympathy for Zac Efron. Moreover, she was in love with him. In 2012, during the elections of the president, Zac Efron, and Selena Gomez together with other famous artists took part in the political video which encouraged the citizens to vote. Later Selena would say her famous phrase, which has appeared all over the web "I vote yes to anything Zac Efron says."

In 2014, all show business began to talk about the unconventional orientation of Zac Efron. People suspected him in romantic relations with his colleague on the movie Neighbors – the actor Dave Franco. Paparazzi captured the friends during the basketball match. Dave's brother – James Franco who is known for his great sense of humor posted their photo on his Instagram page. He signed the picture: "Efron and my brother are meeting each other!!! Congratulations to you, guys! I'm so happy for you!!! ". Certainly, it was just a joke characteristic of James.

In 2015, Zac’s admirers and ubiquitous journalists started to discuss his new love affair with the well-known actress Michelle Rodriguez. Michelle who was ten years elder than Zac and Efron had a joint rest in the villa in Sardinia – they accepted the invitation of the businessman Gianluca Vacchi. The couple posted some of their joint photos on Instagram what made people suspect that bisexual Michelle after the break-up with the model Cara Delevingne "switched" to the men.

In reality, at that time Zac Efron was meeting with the little-known model Sami Miró. She is a charming girl, but she doesn't belong to the movie industry and show business. As it became obvious, they began to have relations already in 2014, but the couple kept their love affair in secret. Just at the end of 2015, Zac Efron appeared in public with his girlfriend as he didn’t want to conceal his beloved woman from the fans anymore.

During the long period, the tabloids with pleasure published the photos of the couple, but this wonderful fairy tale came to an end in late 2016. Zac Efron didn't comment on the reason for their parting, but some tabloids suspected him in reconciliation with his ex-lover Vanessa Hudgens. Zac doesn’t comment on this rumor, but he has deleted the photos of Sami Miró on his Instagram and unsubscribed from her page. 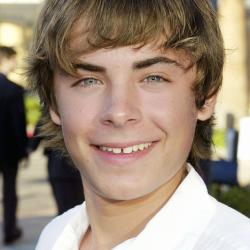