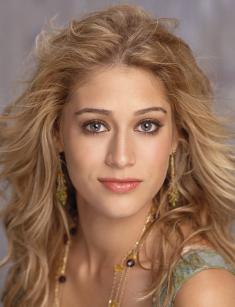 Lizzy Caplan has the full name Elizabeth Anne Caplan is an American actress, known for the films Mean Girls, Cloverfield, Masters of Sex and Now You See Me 2.

Lizzy was born and raised in Los Angeles. Her father was a lawyer and her mother an assistant politician. Elizabeth was the third, youngest child of the Caplan couple. The elder brother and the sister were brought up in her family. When Lizzy was 13 years old, her mother died of a deadly disease. Her father was engaged in further education of his children, who helped his wife's brother, the writer Howard Bragman.

Elizabeth graduated from Alexander Hamilton High School and also took a course of playing the piano. In high school, was a student at the school's Academy of Music. But soon Caplan chose another direction and began to study dramatic art.

At the age of 17, she was invited to the television series. She decided not to go to college to focus on her acting career. She also starred in the music video of Jason Mraz for the song "You And I Both" and participated in the popular talk show of Sharon Osbourne, the wife of Ozzy Osbourne.

The young actress was given a small role of Sara in a teenage television series Freaks and Geeks. Then there was the melodrama Once and Again, the comedy Undeclared, a fantastic series Smallville. By 2004, Lizzy Caplan had a fairly extensive filmography but she did not have noticeable roles.

Finally, there is a breakthrough, a romantic comedy Mean Girls in the creative biography of the actress, which gave the actress a start in life. The main roles in the film were also performed by Lindsay Lohan, Rachel Mcadams and Amanda Seyfried.

Lizzy Caplan played the role of the rogue girl Janis, the former girlfriend of the most popular student in the school. Miniature Lizzy (the actress height is 5,3 feet (163 cm)) performed the role of a schoolgirl, despite the fact that Caplan was already over 20 at that time. She has to take revenge on the former friend, who betrayed and destroyed the reputation of Janis, a girl comes up with an elaborate plan that needs to reveal the dirty secrets of the Queen of the school.

Immediately after the success of this film, the actress is offered the script of the thriller Tru Calling, the youth series Class, a fantastic thriller Cloverfield. Lizzy was nominated for the Saturn Award for the role in the last movie. It is also worth highlighting the drama The Crossing, the absurd comedy Hot Tub Time Machine, a humorous film of Bachelorette, a fantasy thriller True Blood.

Also, Caplan starred in projects such as the thriller The Interview, an action-packed thriller with a cliffhanger 127 Hours, the romantic comedy My Best Friend's Girl. One of the most striking works of Lizzy is the drama Masters of Sex. It is a dramatic television series, which takes place in the 1950-1960s of the last century. In 2015, fans of the actress could see her in the new year's comedy The Night Before.

Lizzy Caplan plays the role of the scientist Virginia Johnson. The research team, which includes Virginia, studies the sexual life of people, determines the patterns of sexual arousal. Scientists face many sensitive issues, conduct mass research and experiments, as well as debunk myths and stereotypes about sexuality, which adhere to the subjects and many scientists.

The series received four seasons and was closed in November 2016.

Lizzy Caplan is called "the right bachelor," which is in a romantic relationship, only until the feelings have cooled. The young woman lived in civil marriage with the actor Matthew Perry a little more than six years, who is the star of the television series Friends but this relationship is over.

The actress does not have any official account on "Instagram," so fans can hardly find out the details of the personal life of their idol, often content with rumors and shots made by the paparazzi.

In 2016, there were rumors about the affair of the actress with Brad Pitt. During this period, the famous actor started a divorce with Angelina Jolie, so the ground for rumors turned out to be fertile. The main reason for the gossip was a photo, in which Caplan and Pitt kiss on the set.

Journalists do not deny that this frame can be just a working moment because the actors were shot together in one film and the heroes of Pitt and Caplan have explicit scenes in the film.

Also, in 2016, there were other rumors about the personal life of the actress. The Western media announced that Lizzy Caplan is engaged to a colleague Tom Riley. Unlike many other gossips about the life of the actress, this information soon received confirmation. The actors announced about their relationship officially. And in September 2017, Lizzy married Tom.

Unlike many compatriots, who run out and buy the villa and the car after the first contract, Lizzy Caplan is lean. She never applied for financial assistance to the bank, lived in one apartment with several neighbors in Hollywood, for a long time, until she could not afford a separate housing. The actress has her favorite pet, a fluffy cat, which she called Lisa Turtle in honor of her favorite character from the teenage TV show Saved by the Bell.

In the summer of 2016, the actress performed the main female role in the popular thriller Now You See Me 2. It is a sequel to the popular 2013 film Now You See Me. The actors, who starred in the first film, starred in the second movie mostly. Thus, Lizzy Caplan's colleagues on the set were Jesse Eisenberg, Mark Ruffalo, Woody Harrelson, Dave Franco, Morgan Freeman. The new face in the sequel was Daniel Radcliffe. Lizzy Caplan has a net worth of $4 million.

Lizzy Caplan performed the role of the illusionist Lula May, who exposes the corrupt businessman and show the audience how the new software steals their data.

Also, in 2016, it was announced that Lizzy Caplan began filming the spy drama Allied, this film is about the Second World War. The film tells the story of a love drama that unfolds between a Canadian scout and a Frenchwoman, he met her during a secret mission. After completing the mission, the lovers get married but the woman begins to be suspected in connections with the Germans.

The role of Lizzy Caplan entered the five main characters of the film. Also, the main roles in the film were played by Brad Pitt, Marion Cotillard, Jared Harris, Matthew Goode.

In 2017, it was reported that the actress would perform the main female role in the sci-fi thriller Extinction. The film tells about a man (Michael Peña), who first sees the death of his own family in the dream and then forced to fight to prevent the same result in a real alien invasion. Lizzy played the role of the protagonist's wife.

The premiere of the film was scheduled for January 2018 but the movie was gone from the schedule by the end of 2017. The crew did not comment on the incident.

Also, the actress is declared as a participant in the film Gambit. It's a superhero movie, which takes place in the X-Men movie universe, based on Marvel Comic heroes. The film tells about the formation of Gambit, a mutant gambler, who just wanted to live for himself but circumstances forced him to join the war of humans and mutants. Channing Tatum plays the main role in the film.