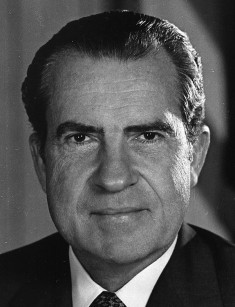 Richard Milhous Nixon was the American political and state activist, the 36th Vice President of the United States (1953-1961), and the 37th President of the United States (1969-1974). Richard was born on January 9, 1913, in Yorba Linda, California, into the Scottish family of a small seller Francis A. Nixon and his wife Hannah Milhous Nixon. There were five sons in the family: Harold, Richard, Donald, Arthur, and Ed who were named after British kings. Richard, the second of the children, was named after Richard the Lionheart.

In the new place, the family suffered the first loss: in 1925, the youngest son Arthur who was only seven years old died; in 1933, 24-year-old Harold died of tuberculosis. In 1934, Nixon entered the Duke University School of Law in Durham, North Carolina. When Nixon was a student, he dreamed of an FBI career. As he came back to California, he got a position at Wingert and Bewley law company. Since 1937, he joined the Bar. Nixon worked on contentious cases between local gas companies and commercial firms.

In the next year, the beginning lawyer headed the company’s branch in La Habra Heights. In 1939, Nixon managed to buy a part of the company’s share.

Nixon viewed his law career as the necessary life experience. In 1942, he enrolled in the US Navy where he began as a lieutenant junior grade. He was responsible for the American Pacific Ocean air bases security. In 1946, the lieutenant Nixon demobilized.

In 1946, Herman Perry, one of Bank of America administrators, invited Richard to take part in the U.S. House of Representatives from California's 12th district elections. In the pre-electoral campaign, the young lawyer managed to surpass the previous representative J. Voorhees. Nixon held this position for two terms. In the late 1940s, Nixon worked at the intelligence office of the commission on the identification of secret communists. At this period, he organized and solved the case of the Soviet spy Whittaker Chambers who collaborated with the high-ranking bureaucrat Alger Hiss.

In 1950, Richard Nixon got the mandate of the senator from California and moved to Washington, DC. Three years later, the Republican representative became the Vice President of Eisenhower’s government. Nixon accompanied the President regularly during his meetings with the Congress and the cabinet of ministers; he often announced the President’s and government’s decisions to the public. Due to Eisenhower’s disease, Nixon took his responsibilities three times from 1955 to 1957.

In 1960, Nixon competed John F. Kennedy during the next elections and lost; the voting difference was minimal. In 1962, Richard resigned from the White House and came back to California to continue the career of a lawyer. As the politician lost the governor elections, he believed his political career came to its end. In that year, Nixon had his autobiography “Six Crises” describing his work in the US state apparatus released.

In 1963, Nixon moved to New York and opened a branch of a law company there. In the next year, he was invited to the pre-electoral campaign headquarters of the candidate Barry Goldwater. In 1968, Nixon announced he nominated himself the presidential candidate; on August 7, he gained the victory and defended his opponents Hubert Humphrey, George Romney, Nelson Rockefeller, and Ronald Reagan.

Richard Nixon’s domestic politics was based on conservatism. The President opposed social programs for the most deprived social groups and farms and stood against the Supreme Court liberalization. The legendary Moon landing of the American astronauts occurred when Nixon was the President.

In the international politics, the United States Secretary of State and National Security Advisor Henry Kissinger controlled everything. Nixon assigned him the task: to put the US out of the Vietnam War. In July 1969, the withdrawal of the American troops from South Vietnam began; it lasted for three years and finished at the beginning of 1973 when the Paris Peace Accords were signed.

In 1970, Nixon aimed at keeping the American status of the Superpower, so he sent the army to Cambodia where the new Lon Nol’s government began to fight communists. The continuation of the war in Indochina provoked a new wave of protests.

At that period, the convergence between the Soviet Union and China began. In 1972, Nixon was re-elected as the president. In February, he went to Peoples Republic of China, and he and his wife visited the USSR in May. SALT I Treaty was signed with the Soviet leader Leonid Brezhnev.

In 1972, four months before the new elections, five people were arrested: they were installing the tapping mission equipment at the Watergate office of the Democrat candidate for the presidency George McGovern. The arrested had a tape where politicians’ talks were recorded and photos of secret documents. The scandal played a decisive role in the president’s biography.

In two years, Richard Nixon’s indirect involvement in this case was proved: many false testimonies, threats, and witness bribery were registered. As a result, Nixon resigned on August 9, 1974, under the threat of impeachment. The next state leader Gerald Ford granted him amnesty although no sentence was imposed.

At the beginning of 1938, Richard Nixon met his teacher Thelma Pat Ryan who gave acting classes at the theater studio “Whittier Community Players.” The young man courted her for a long time before she agreed to marry him. In June 1940, the wedding ceremony took place. Thelma gave birth to two daughters: Tricia (1946) and Julie (1948).

After the resignation, Nixon wrote literary works and memoirs. The former president was forbidden to take up legal and political activities. In his last years, Richard lived in a closed area in Park Ridge, New Jersey. On April 22, 1994, he died of a brain hemorrhage.

At the beginning of 1974, there was an incident on board the plane of the company “Delta Air Lines”: it was the attempt on the President’s life. A terrorist intruder entered the plane and demanded the pilots go to Washington. The FBI agents started shooting; eventually, the terrorist shot himself. Niels Mueller’s detective thriller “The Assassination of Richard Nixon” came out in 2004. By now, the 2016 comedy “Elvis Meets Nixon” is the latest movie where the 37th President of the United States is pictured. 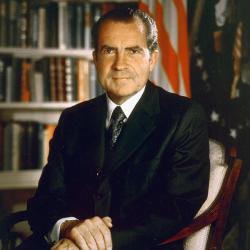