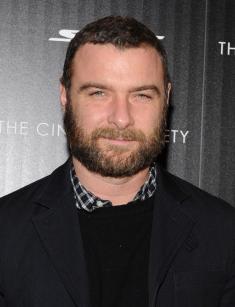 Liev Schreiber is an American actor, who became known for the films in the style of action and horror, including Scream, Shutter, The Omen and X-Men Origins: Wolverine. He also became famous as a theater actor. He received the Tony Awards. Today, films with his participation are popular all over the world.

Liev Schreiber was born in San Francisco in a family of creative people. Tell Schreiber, Liev's father, was a theater actor and director of plays. Heather Milgram, the mother of a Hollywood celebrity, is an artist who says she named her son after the writer Leo Tolstoy. A year after the birth of the baby, his family moved to Canada, where they lived together for three years, after which the parents decided to part. Heather moved to New York with her child, worked as a taxi driver, made dolls and sold them.

His mother, who was a very eccentric woman, followed the cultural education of Liev jealously. The woman insisted that her son listened to classical music and read a lot. Besides, young Schreiber was forbidden to watch color films.

At the age of 12, Liev was caught stealing, so his mother sent the boy to the Hindu school, which was located in the state of Connecticut. After returning to New York, Liev went to a municipal high school, where he was an outcast because of the spread of rumors about the past theft, as well as because of the opinion of his family as "strange." In high school, Liev Schreiber went to a private school Friends Seminary, where he first appeared on the stage in a school play and found a predisposition to the profession of actor.

After graduating from high school, Liev went on to Hampshire College in Amherst, Massachusetts and then studied at the Yale School of Drama, where he specialized in dramatic art. After that, Liev Schreiber went to the capital of England and began to attend a drama class at the Royal Academy of Dramatic Art, as he decided to become a writer and screenwriter. But the desire for acting won and he returned to the stage.

Liev Schreiber first appeared on the stage as an actor. In 1993, he made his Broadway debut in the play In the Summer House. He was involved in many of Shakespeare's tragedies, including the plays Hamlet, Henry V, Cymbeline, Macbeth.

In 2005, the artist played Richard Roma in the famous play Glengarry Glen Ross, for the participation in which the actor received the Tony Awards. He had another award Drama League Award for the play Talk Radio. Besides, Schreiber played in a successful Broadway play The Mercy Seat along with Sigourney Weaver.

The actor started with small roles in TV movies and series in the cinema. Besides, Liev starred in many non-profit and independent films. The actor was very famous after the release of the teenage horror film Scream in 1996, the success of which led to the continuation of the movie. The actor played the role of rapist and murderer Cotton Weary. The working title of this movie was Scary Movie. This title was not used but the writers called a series of parody movies.

Later, Schreiber was invited to star in the film of a similar genre. The most popular of these movies were Shutter and The Omen, which was released on a symbolic date 06.06.06, which was arranged by the director John Moore to release the date, symbolized the monstrous number on which the plot of the film is based.

But Liev starred in films of other genres. He starred in the military drama Defiance, which tells about the Second World War. The actor plays Zus Bielski, one of the brothers, who organized the Jewish partisan unit in Belarus in 1941. The film is based on real events.

Also, two political film projects are worth noting. The drama Spinning Boris talks about how American political scientists invited by Anatoly Chubais during influenced on the results of the vote of the elections of the President of Russia in 1996. Liev Schreiber plays one of these experts, Joe Shumate. The Times argues that the script of the movie is not a fantasy and they have "irrefutable evidence" of this fact.

The second project is the Canadian mini-series Hitler: The Rise of Evil, which tells about the coming of Adolf Hitler to power in Germany. The actor plays a successful entrepreneur Ernst Hanfstaengl in this film, who is the initiator of the creation of an image of the leader of Nazi Germany – a short mustache and so on.

Liev Schreiber tried his hand as a screenwriter and director in the tragicomedy. Everything Is Illuminated in 2005. The touching film, shot in the style of road movie, was warmly received at the Venice Film Festival and Schreiber was awarded the "Laterna Magica Prize."

In 2009, the film X-Men Origins: Wolverine with Hugh Jackman in the main role. The American actor got the role of Sabretooth (Victor Creed).

The superhero action tells the story of two brothers, who pass through the fire of many wars of XIX-XX centuries, protecting each other. They participate in the Vietnam war in the future. The military operation in Vietnam ends with the murder of an officer and the brothers are sentenced to death.

The regeneration ability helps them to survive and soon William Stryker (played by Danny Huston) invites the brothers to join the ranks of a special group that performs secret tasks.

The audience and critics appreciated this movie, calling the film X-Men Origins: Wolverine the best in the film biography of Schreiber. The actor admitted in an interview that he had to spend a lot of time in the gym to improve his physical shape (the growth of Liev is 6 feet (185 cm), his weight is 182 lbs (83 kg)) to participate in the popular franchise.

Liev Schreiber had a relationship with the actress Kristin Davis and the film producer Kate Driver.

He met with the actress Naomi Watts on the set of the drama The Painted Veil, with whom he lived in a civil marriage since 2006. In July 2007, Naomi and Liev had a son Alexander Pete, who is called in the family in the Russian manner Alexander. The couple had their second child Samuel Kaia year and a half. Liev and Naomi repeatedly said in an interview that they would have decided on a third child if they could be sure that it would be a girl.

In the fall of 2016, the American press reported that Naomi Watts and Liev Schreiber broke up after 11 years of their relationship. Celebrities told in an interview with Reuters that they intend to maintain friendly relations in the future.

"We are going to continue to raise children together, moving into a new phase of our relationship with great love, friendship and respect in our hearts," Naomi and Liev told the press.

Many fans of the couple did not hide their disappointment. The users began to discuss this news actively on "Instagram."

In May 2017, the media reported that Liev Schreiber had an affair with Morgan Brown, the ex-lover of the Scottish film actor Gerard Butler.

Schreiber is fond of sports, especially football, basketball, fencing and cycling. The actor is an excellent swimmer.

The American actor continues to participate in the filming of movies. The latest iconic film with the participation of Schreiber is The 5th Wave. The actor played Colonel Vosh in this film. Liev Schreiber has a net worth of $25 million.

In 2017, the American press reported that Liev Schreiber would also participate in the creation of a new cartoon about Spider-Man. The actor will voice one of the characters of the animated film, which will be released in 2018.