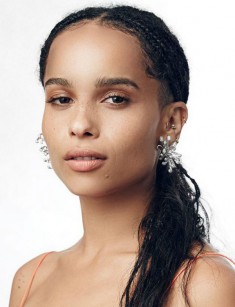 Zoë Isabella Kravitz is an American actress, singer, and model. Her most famous roles are the following – a role of the mutant Angel in the movie comic book "X-Men: First Class", the role of Toast in the action movie "Mad Max" and Christina's character in anti-utopia "The Divergent".

Zoë was born in a family of the famous musician Lenny Kravitz and his spouse, the actress, and model Lisa Bonet. It is interesting that her parents have both Afro-American and Jewish roots. And almost all her relatives gained popularity in due time.

The paternal grandmother, Roxie Roker, was a black actress, and her husband, a Jew Simur Kravitz who had emigrated from Ukraine was engaged in producing of educational films. On her mother's side, Zoë has a grandfather - the opera singer Alain Bonet, and only his spouse hadn’t got any public profession and was engaged in the education of children of younger school age.

When Zoë Kravitz was about five years old, her parents divorced. At first, the girl stayed with her mother in the town of Topanga Canyon, but when she got married for the second time, the future star moved to Miami to her father who had become for her not only an example in life but also the best friend. Thus, since Zoë turned 11 years she saw her mother only in summer. By the way, she has a stepbrother Nakoa-Wolf and a sister Lola Iolani born in the marriage of her mother with the actor Jason Momoa.

Kravitz attended high school in Miami, and she finished last courses in New York. Not many admirers know that throughout all teenage years Zoë had been struggling against anorexia and bulimia. After getting the school-leaving certificate the girl became the student of the Acting Department of the National Conservatory of Music of America but in a year she left her studies to concentrate on the movie career. At the same time, she began modeling and also created a musical band.

The first photo shoot of Zoë Kravitz for the "ELLE" magazine was published when she was 18 years old. Then she took part in the photoshoots for such famous editions as "Vanity Fair", "Teen Vogue" and many others. But actually, her first professional pictures had been taken at the time when the model hadn’t turned 17 yet. But those photos weren't censored: minor Zoë appeared with cigarettes and alcohol at these pictures.

At the age of 16 Zoë Kravitz together with the keyboard player Levi James and the drummer Jimmy Giannorolus organized their own trio under the name "LolaWolf". Young people recorded R’n’B music and the electro-pop. Actually, guys had played together in the "Reputante" band earlier, but Zoë asked her friends to help her to get away from depression connected with anorexia, and guys offered the girl to record the "Wanna Have Fun" song.

After this, the trio shut themselves in the home recording studio and recorded a number of new compositions which would make a debut album "LolaWolf". By the way, the name of the band has the names of Zoë's stepsister and stepbrother connected together.

Soon the group refused the favorable contract with a great music label because they wanted to control their creative processes on their own. They added several new songs and released the album "Calm Down" which had already had commercial success due to the songs "Jimmy Franco" and "Bitch". The famous artists – the rapper A$AP Rocky and the actress Miley Cyrus appeared in these song videos.

This single foreshadowed the new record, which was released in 2016.

The first movie with Zoë Kravitz's participation came out in 2007. It was the romantic melodrama where Catherine- Zeta Jones and Aaron Eckhart performed the leading roles. At the same time, the actress appeared in the crime thriller "The Brave One" in duet with Jodie Foster.

Later Zoë worked together with Ben Foster in the comedy "Birds of America", with Bruce Willis in the mystical movie "Assassination of a High School President ", with Pierce Brosnan in the psychological drama "The Greatest", with Emma Roberts in the thriller "Twelve".

The screen adaptation of the comics "X-Men: First Class" brought great popularity to the actress. In this picture, she performed the role of a mutant known as Angel. Her character Christina, the best friend of the main character of the cycle of movies under the general title "The Divergent" is one more popular personage performed by Zoë Kravitz. The actress also appeared in the new part of the franchize "Mad Max". In this post-apocalyptic action movie, the girl appeared as a character of Toast, the antagonist's spouse.

Besides, Zoë Kravitz played rather significant roles in the science-fiction picture "After Earth", in the comedy "The Road Within" and in the fantasy story from the world about the magician boy Harry Potter "Fantastic Beasts and Where to Find Them".

Zoë Kravitz got acquainted with the actor Ben Foster on the movie set of the romantic comedy "Birds of America". They had a love affair which had lasted for about a year.

Then the girl had relations with Andrew Van Wyngarden – the lead singer of the Brooklyn band, and also with her movie partners - Michael Fassbender with whom she played in "X-Men: First Class" and with Ezra Miller who was in the cast of the melodrama "Beware the Gonzo".

Zoë Kravitz had a quite long-lasting romantic relationship with Penn Badgley - a star of the TV series "Gossip Girl".

After that, the actress had short love affairs with the Canadian singer Drake, American actor Chris Pine and with Noah Gabriel Becker who wasn’t a public person.

According to the information from the social networks, at present time the actress Zoë Kravitz and the musician George Lewis Jr. are in romantic relations. He is known to the public under the pseudonym of Twin Shadow. 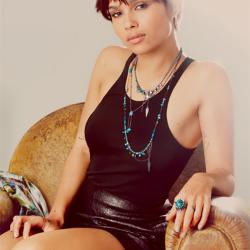